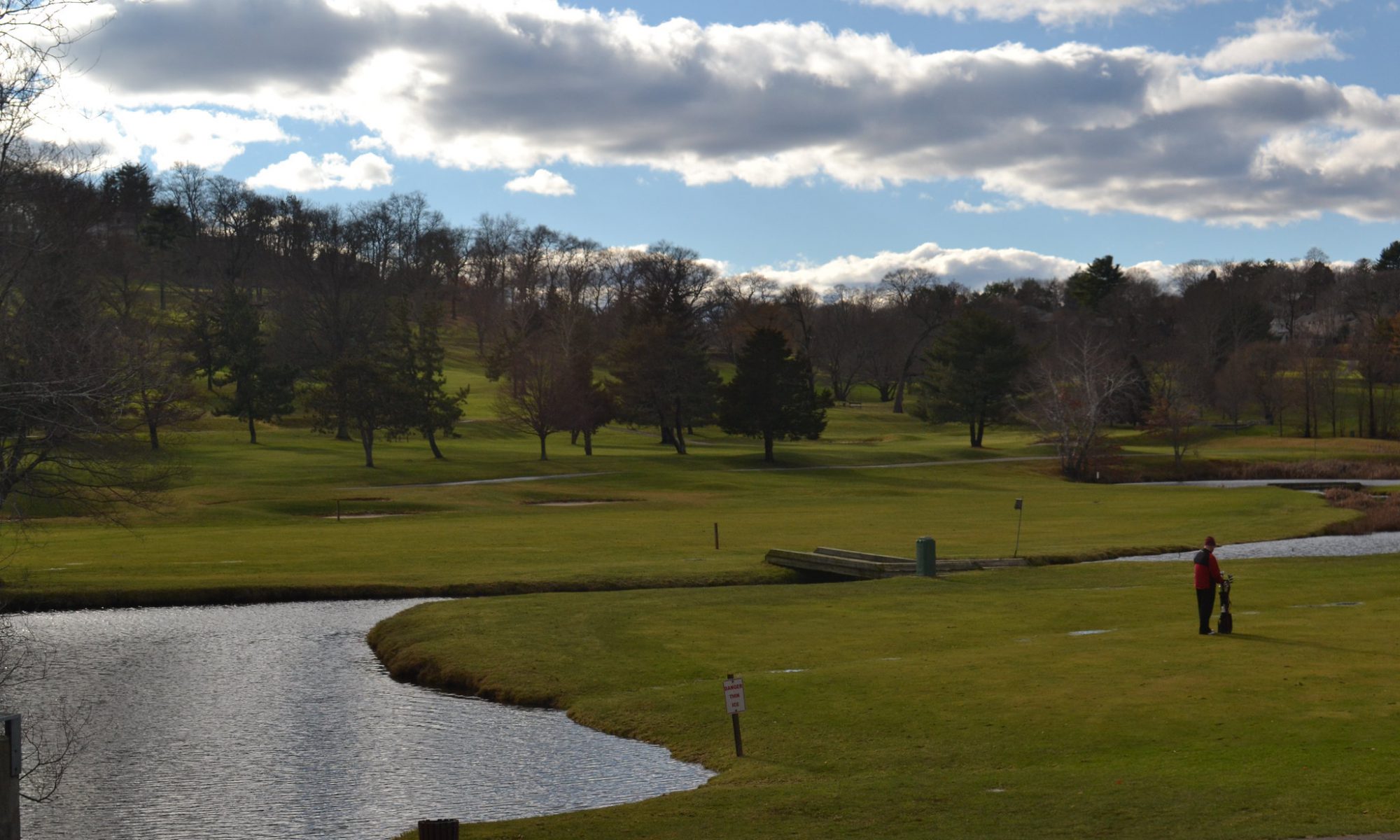 Despite the closure of over 800 golf courses in the last decade and the fact that young people have virtually no interest in the sport, golf may be the emblematic pastime of the 21st century. So many of the key issues our society must grapple with in the next hundred years or so, from environmental change to the concentration of wealth and political power in the hands of an elite few, are borne witness to on the vast stretches of meticulously maintained green. Given the ethical ramifications of those issues, it’s pertinent to ask whether or not the continuation of the sport of golf itself is ethical, and what the prevalence of this sport might say about our future.

The first and most pressing objection to golf is its environmental impact. Apart from impact of pesticides, environmental scholars note that “Golf course maintenance can also deplete fresh water resources [… and] require an enormous amount of water every day,” which can lead to water scarcity. A golf course can take up nearly 150 acres of land and can displace the area’s native flora and fauna in favor of an artificial and homogenized landscape. Furthermore, the impact of a golf course can be felt beyond the land it physically occupies. From 2017 to 2019, a teenage diver found over 50,000 golf balls underwater off the coast of California, the byproduct of five nearby golf courses. This is especially concerning to environmentalists, because, as the NPR reporter who covered the story noted, “golf balls are coated with a thin polyurethane shell that degrades over time. They also contain zinc compounds that are toxic.” They eventually break down into microplastics, an especially insidious form of pollution.

However, some argue that golf courses enclose and protect rather than damage fragile ecosystems. One such often-referenced paper, “The Role of Golf Courses in Biodiversity Conservation and Ecosystem Management,” was written by Johan Colding and Carl Folke and published in 2009. After examining the effect of golf courses on local insect and bird populations, Colding and Folke concluded that “golf courses had higher ecological value relative to other green-area habitats,” and “play essential role in biodiversity conservation and ecosystem management.” They argue that golf courses can be a refuge for wildlife that’s been pushed out from other areas, and that golf courses can foster biodiversity by working hand-in-hand with conservationists. However, this paper was published by Springer Science+Business Media, a global publishing company of peer-reviewed scientific literature that had to retract 64 scientific papers in 2015 after it was discovered that the articles hadn’t actually been peer reviewed at all. Seen in that light, this research (and the conclusion it draws) becomes questionable. Another study, “Do Ponds on Golf Courses Provide Suitable Habitat for Wetland-Dependent Animals in Suburban Areas? An Assessment of Turtle Abundances”, published in The Journal of Herpetology in 2013, examined the potential for golf courses to contain turtle habitats with mixed results. The researchers noted that turtle habitats within golf courses did have the potential to foster wildlife, but were negatively impacted by residential development projects, which many golf courses today contain. To summarize, there is no clear consensus on this issue, though researchers uniformly note the very act of building a golf course in the first place does disrupt wildlife, whether or not conservation efforts are made after the fact.

Golf may have an ultimately negative impact on the environment, but its continuance has ethical implications for our social and political landscape as well. Golf has long been considered an elite pastime, and President Trump’s fondness for the sport is often used to demonstrate his insufficiencies as a leader. Rick Reilly, a contributing writer for ESPN’s SportsCenter and ABC Sports, released a book in early April of this year entitled Commander in Cheat: How Golf Explains Trump. In an article for The Atlantic explaining how Trump has sullied the reputation of golf through his propensity to cheat and tasteless displays of wealth, Reilly laments,

“[The situation] stinks because we were finally getting somewhere with golf. It used to be an elitist game, until the 1960s, when a public-school hunk named Arnold Palmer brought it to the mailmen and the manicurists. Then an Army vet’s kid named Tiger Woods brought it to people of color all over the world. We had ultracool golfers like Woods, Rickie Fowler, and Rory McIlroy, and pants that don’t look like somebody shot your couch, and we’d gotten the average round of golf down to $35, according to the National Golf Foundation.”

However, it’s difficult to stand by Reilly’s assertion that golf has entirely outgrown its elitist roots. In an interview with Golf Digest, Trump remarked,

“First of all, golf should be an aspirational game. And I think that bringing golf down to the lowest common denominator by trying to make courses ugly because they want to save water, in a state that has more water […]

I would make golf aspirational, instead of trying to bring everybody into golf, people that are never gonna be able to be there anyway. You know, they’re working so hard to make golf, as they say, a game of the people. And I think golf should be a game that the people want to aspire to through success.”

Replace the word “golf” with “power,” and you’ve got an almost eerily succinct and transparent summary of capitalist conservative dogma (in which the playing field is never intended to be even, the environment is devalued in favor of aesthetics, and the American dream is only illusory for the masses). But furthermore, Trump’s comment encapsulates many of the elitist attitudes and expectations that still attend golf today, regardless of the price for a single round at a public course. The resorts and country clubs frequented by Trump and his ilk are beautifully manicured arenas of power, places where politicians and businessmen can solidify ties and network over club sodas. When he was attacked for misogynistic remarks about women, Trump’s defense was that he’d heard Bill Clinton say worse things about women on the golf course, going so far as to call Mar-a-Lago, the resort attached to a golf course owned and frequented by Trump, the “The Southern White House.” The words “golf course” have become shorthand for private spaces of leisure for powerful men, a place for unethical behavior sheltered from the public eye and more traditional structures of power by miles of dense greenery.

Unlike sports that are not as white or monolithic, like basketball and football, contemporary golf is not fertile ground for political or cultural resistance. Golfers are notably non-vocal about politics. As golf correspondent Lawrence Donegan points out, many famous pro-golfers are pressured to play golf with the president, and show almost uniform deference to him out of fear of losing corporate sponsorships. This deferential attitude is taken up by most elites who play golf. Donegan says,

“The acquiescence of golf’s leading figures and governing bodies [to the Trump administration] is amplified […] down the sport’s hierarchy, especially in the (sometimes literally) gilded country clubs of states such as Florida, New Jersey, New York, and Texas, which depend on a narrow, and narrow-minded, membership of wealthy, white couples who pay their subscriptions as much for the social cachet as for the sport. Within the confines of the club, they are free to rail against minorities, free to declare Trump the greatest president since Lincoln, free to act like the genteel segregationists they prefer to be.”

The fact is that golfers tend to be wealthy, and that the golf course is a place where hierarchy and prestige are not only respected but built into the very foundation of the culture.

Many agree that golf is both a waste of resources and a symbol for the mechanisms of capitalism, but these two issues have become intertwined in recent years. Golf, some have argued, has been yoked in the service of capitalism and corporate “greenwashing.” Rob Millington explores this idea in his paper “Ecological Modernization and the Olympics: The Case of Golf and Rio’s ‘Green’ Games,” published in the Sociology of Sport Journal in 2018. He defines ecological modernization as “the idea that capitalist-driven scientific and technological advancements can not only attend to the world’s pending environmental crises, but even lead to ecological improvement, thus allowing sustainability and consumption to continue in concert.” This idea is promoted by corporations who want to greenwash themselves, or to appear green to consumers without changing their essential business models. It is very similar to the conclusion drawn by Colding and Folke, who argue that environmental destruction in the name of leisure and consumerism can take place alongside conservationist efforts without contradiction.

Millington notes that “In response to the growing tide of environmental opposition since the 1960s, the golf industry took up an ecological modernist approach to promote golf as a natural, green, and environmentally friendly sport that allows people to connect with nature.” According to Millington, this is precisely what happened in 2016 Olympic games at Rio De Janeiro, for which a golf course was built on environmentally protected land in the spirit of ecological modernization. The design of the course was presented as enhancing rather than fighting the natural landscape, despite the fact that any incursion into a natural space can disrupt the ecosystem. In this sense, the continuing relevance of golf can be employed for neoliberal ends, under the guise of environmentalism or unity between nations.

In “Is Golf Unethical?”, a 2009 article published in The New York Times, writer Randy Cohen covers the basic environmental impact and bourgeois ethos of golf. On the question of whether or not the sport itself is ethical, he concludes that “perhaps the only moments of grace and beauty and virtue in any game occur during actual play, and we should not look too closely at its broader culture and implicit ethics without expecting to be dismayed.” This is just one defense of the sport, that the skill that goes into mastering it outweighs any moral scruples we should have. Another thing often said in defense of golf is that it, like any sport, builds bridges and creates a sense of fellowship across the world, that it gives us a common language in which to communicate our values and abilities across international lines. But does it actually build bridges between nations or just import elite bourgeois culture and sources of pollution to other parts of the world? The act of swinging a golf club has no objective moral value attached to it, but the trappings of golf, the privilege and waste and unnecessary consumption of resources, certainly do.