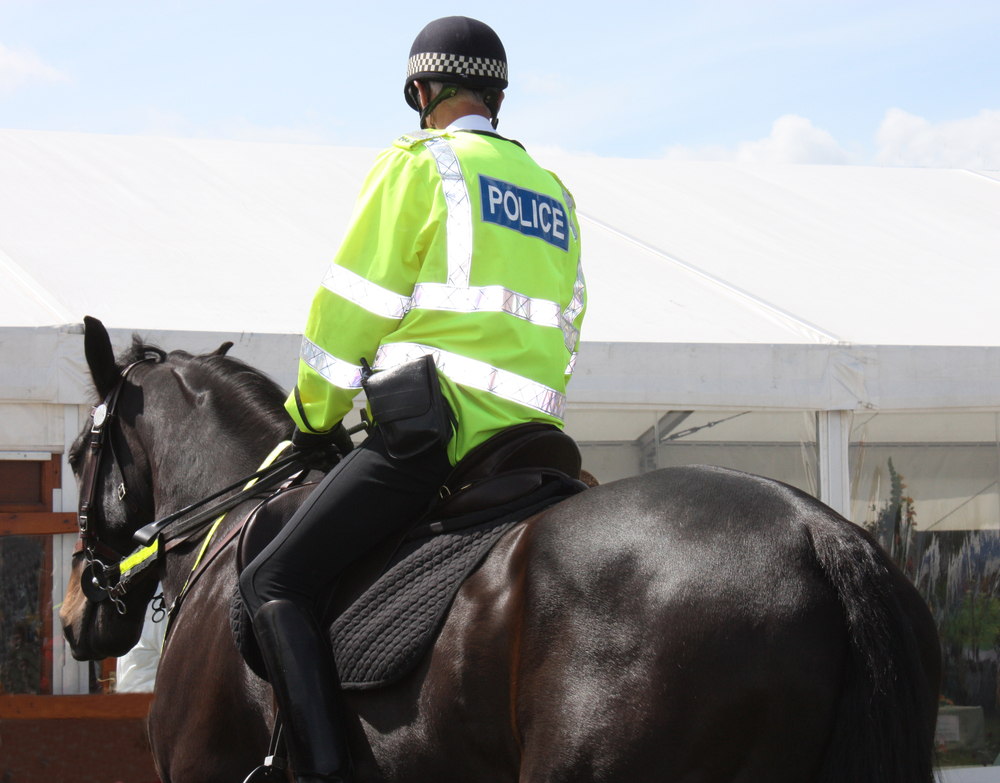 The number of non-human police officers currently in the United States is not known.

Although law enforcement dogs and horses are routinely featured on departmental social media pages and in pop culture, the Bureau of Labor Statistics only tracks human employment data; this means that the 665,000 police and sheriff’s patrol officers counted in May of 2019 (and the over 423,000 additional correctional officers at that time) were all our fellow mostly-hairless bipeds. In 2010, the secretary of the North American Police Work Dog Association made a “wild guess” that more than 50,000 canines were being actively used by law enforcement officers of one kind or another; the higher costs of caring for horses means that their numbers have always been much lower by comparison, with many large cities maintaining a mounted police force numbering in the dozens, largely for reasons of pageantry and public relations.

However, to be precise, the first sentence of this article is incorrect: because only humans can be real police officers, the canine or equine law enforcement population is, technically, zero. Although police animals are often described and honored as full representatives of the organizations that own them, they are not literal members of the police force and are not obligated to carry out the duties of such an office. Dogs do not swear oaths to protect and serve their communities; horses are not licensed agents of the state. Police animals are police property, which is why their mistreatment is prohibited by the “Malicious Mischief” section of the U.S. Code that protects government-owned assets.

Although the motivation for police using non-human animals might be understandable, it poses several significant ethical questions that should be ignored.

Typically, police departments use dogs and horses in three basic ways: as shields to preserve the well-being of police officers, as devices to accomplish technical goals, and as props to bolster positive publicity. As the American Kennel Club describes, K-9 units are frequently “the first ones to put their lives on the line and go in against an armed suspect to protect their human partners;” in this way, police animals are essentially fuzzy versions of kevlar vests. In the second case, and perhaps most famously, dogs and horses are deployed as organic devices that perform tasks like detecting illicit substances or blocking pedestrian traffic; by co-opting the unique abilities of their species, police departments literally instrumentalize non-human animals as a standard operating procedure. But, most notoriously, the optics of cute and cuddly creatures are a powerful tool for manipulating public opinion about police behavior — so much so that Ray Allen Manufacturing, a leading provider of equipment for police K-9 units, explicitly discusses “public relations” as a key element of their marketing strategy.

Each of these uses is, at best, ethically dubious. Intentionally endangering the lives of innocent creatures is often taken as a paradigmatic example of immoral behavior — one that is only compounded by the fact that their training regimens make police animals place themselves in harm’s way. Regardless of the affection or honor shown to them during or after their deaths, insofar as these animals are taught to prioritize the interests of others over their own, they are subject to a kind of “bad faith” and are thereby prevented from being the sorts of creatures that they would otherwise freely be. (One might almost call them something like four-legged “serious men” in Beauvoir’s sense!)

Moral philosophers disagree about the propriety of animal husbandry as a whole: some argue that labor-extraction from non-human animals is always, in principle wrong; others say that it is at least possible for humans to ethically benefit from animal labor under certain conditions, chief of which requires the constant protection of the animals’ welfare. Either way, it’s far from clear that what is good for a dog involves being able to identify the scent of cocaine or that a horse’s own good includes being able to march in formation in a city’s parade.

Finally, the exploitation of public affection for non-human animals to parasitically improve popular opinions of police departments seems to be a text-book example of propaganda with all of the questionable moral baggage attached to such a practice. And even if such emotion-manipulating effects are engendered unintentionally, their real-world consequences (in matters like policy support and voting behavior) nevertheless demand our attention.

Ultimately, it is true that many police animals enjoy their lives in the company of attentive care-takers (though a surprisingly large number of counterexamples exist), but Christine Korsgaard points out at least one more relevant difference between police officers and the animals they own: dogs and horses cannot choose to become police animals, but must always be drafted across the thin blue line. Although every single police officer currently serving does so voluntarily, the same cannot be said about any of their animal “partners.”

So, as the national conversation continues to focus on the immorality of many policing practices and the need for widespread policy change, the role of non-human animals within police departments deserves a portion of that attention as well.