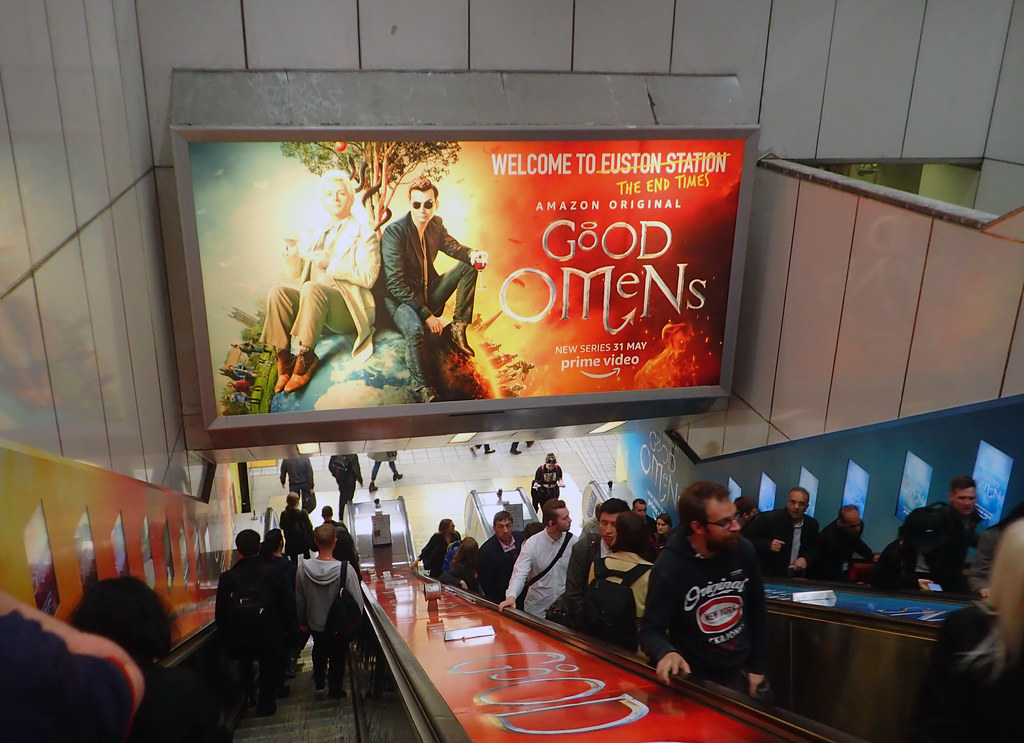 On May 13th, a Christian group called Return to Order began circulating an online petition to “Tell Netflix: Cancel Blasphemous ‘Good Omens’ Series.” So far, the petition has received over 21,000 signatures and has attracted the attention of many more. It generated substantial buzz in news sources and on social media, but perhaps not for the reasons that those who started it had hoped—Good Omens, an adaptation of a book written by Neil Gaiman and Terry Pratchett, was produced as a collaboration between Amazon and the BBC. The series was not made by nor is it hosted on Netflix. There is little that Netflix could do to get the series cancelled.

The fallout from this flub was amusing. Gaiman responded to the incident on Twitter: “”I love that they are going to write to Netflix to try and get #GoodOmens cancelled. Says it all really. This is so beautiful … Promise me you won’t tell them?” Both Netflix and Amazon had some fun with the mix-up on Twitter. Netflix tweeted, “ok we promise not to make any more,” and Amazon replied, “Hey @netflix, we’ll cancel Stranger Things if you cancel Good Omens.” Needless to say, the series was not cancelled.

The series stars David Tennant as the demon Crowley, and Michael Sheen as the angel Aziraphale. It is set at the end of days during the rise of the antichrist. The unlikely pair has developed a fondness for the human race and they work together to save it. In their petition, Return to Order expresses concern that the show “is a mockery of God’s order and religion, and makes Good and Evil seem equal and interchangeable.” They also complain that God is voiced by a woman (Frances McDormand) and they voice their fear that, the series is “another step to make Satanism appear normal, light and acceptable.”

From a legal standpoint, there is nothing wrong with what Return to Order did. The members have a constitutional right to free speech, and in this instance they inadvertently used that right to heartily embarrass themselves. The stakes in this debate are insignificant and it is easy to simply find the story amusing. There are, however, compelling moral issues lurking behind the scenes, obscured by the mistake.

Art is a form of speech.  When we disagree with what we take to be the content of the message, should we campaign for the speech in question to simply go away? In this particular case, the answer may seem obvious—if a person doesn’t like what they take to be the message of a piece of art, that person is free to simply avoid that piece of art. No one is forcing anyone to watch Good Omens. The answer may not be as clear in other cases.

There is no reason to believe that Gaiman or Pratchett are trying to sweeten up Satanism to make it go down easier. Perhaps if members of Return to Order took the time to watch Good Omens, they would realize that the message of the series is not what they assumed that it was (and they’d also be aware of who made it). What about cases in which the message is more reasonably offensive to a religious community? In 1987, New York artist Andres Serrano photographed a plastic crucifix submerged in his own urine and titled it “Piss Christ.” This offended many Christians. In 2011, the photograph was displayed in an exhibition called, “I Believe in Miracles.” A group of protesters entered the exhibition, threatened the guards with a hammer, broke the plexiglass and destroyed the photograph.

This issue is morally complex. A person’s core beliefs tend to be fundamental to their identity. When those beliefs are treated with disrespect, often the person who holds them feels that their dignity is being disrespected as well. Complicating matters is the fact that beliefs that turn out to be false can, nevertheless, be fundamental to a person’s identity. It can often feel, then, that demonstrating respect for the dignity of other people involves demonstrating respect for beliefs that we might think are false and even harmful. It is difficult to know how to keep discourse respectful under these conditions. There are obligations on both sides.

Some argue that, at least in certain cases, respectful discourse shouldn’t be our first priority. Some messages are so hateful and potentially harmful that they should have their platform taken away immediately. If messages are racist, sexist, or homophobic, they simply do not deserve a platform of any kind. There may be benefits to criticizing things like religion, however, because religion is a belief system that people can choose to either accept or reject. Some argue that there is no similar benefit to hate speech.

Others argue that the healthiest environment, intellectually and morally, is one in which all ideas can be expressed. Philosopher John Stuart Mill famously argued that ideas, even if insidious, should not be suppressed. In On Liberty, Mill argued that

“the peculiar evil of silencing the expression of an opinion is that it is robbing the human race; posterity as well as the existing generation; those who dissent from the opinion, still more than those who hold it. If the opinion is right, they are deprived of the opportunity of exchanging error for truth; if wrong, they lose, what is almost as great a benefit, the clearer perception and livelier impression of truth produced by its collision with error.”

This is a somewhat settled matter when it comes to the obligations of government; free speech is crucial to a thriving democracy. But determining what to do in our private and creative lives is more difficult. We must find ways to speak truth and also to respect dignity, to express ourselves but also to understand and appreciate that our words have consequences. We also have obligations as listeners. It may be that the most effective way to deal with speech we dislike is not to cancel or destroy the speech, but to use our own voices to express why the speech might be problematic.