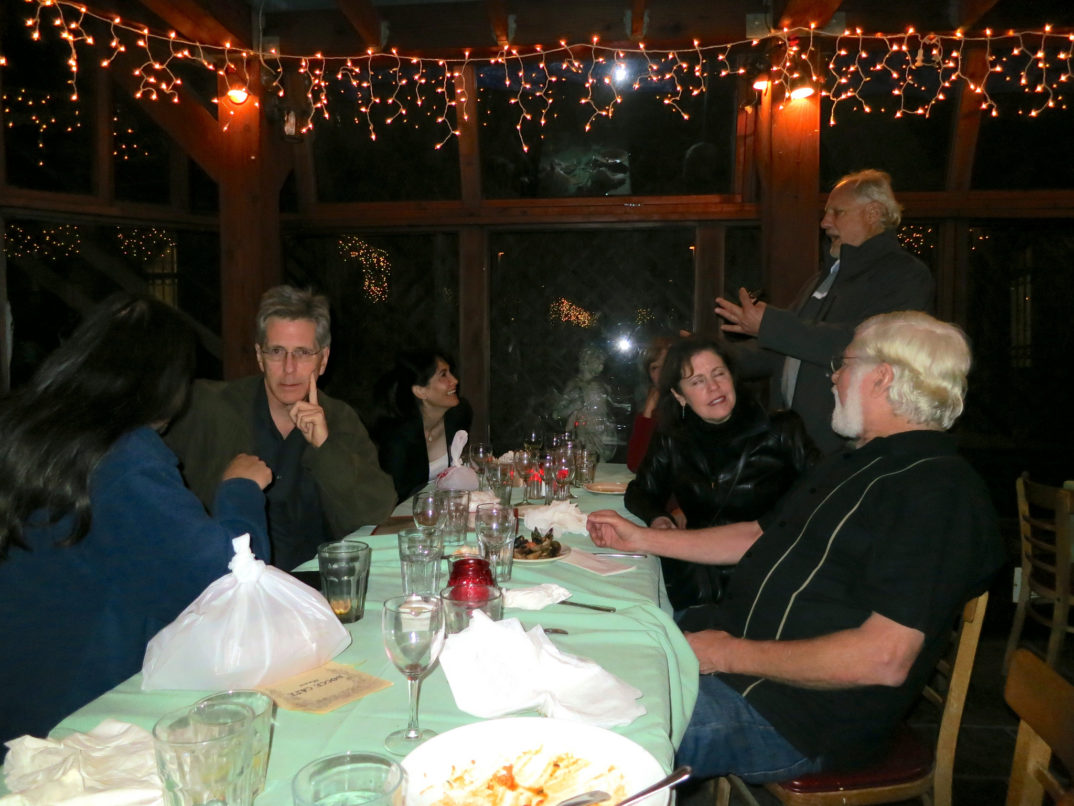 The holiday season is upon us, which often means spending more time with family. For many of us, this also means the risk of heated political disagreements around the dinner table. If you’re like me, you’ve since learned that trying to talk politics with family members is more often than not a waste of time: no one ever really changes their mind, and everyone just ends up being mad at each other. So perhaps you’ve adopted a new policy: ignore the debates, or don’t engage, or change the topic as quickly as you can. It’s easier on everyone.

Why do these dinner table arguments seem so futile? I think one reason is that many of our political disagreements come down to an underlying moral disagreement, namely disagreements about what’s right and wrong, what kinds of obligations we have to others, or just how people should be treated in general. So when you and I disagree about whether, say, we ought to increase minimum wage, or whether we ought to tax people for services that they don’t themselves use, a major part of our disagreement is about when we ought to make sacrifices for the benefits of others. And then it’s up for debate as to how much of a hit myself and my family should take for the well-being of others: some people think we ought to do a lot to help each other out, especially if we have a lot, whereas others think that they shouldn’t be asked to make sacrifices, especially if what they have is something that they feel that they have earned and are entitled to.

While moral debates happen all the time, experience suggests they’re difficult to resolve. Why might this be the case? First off, what often seems to be so difficult about moral debates is that those who disagree with us about moral matters don’t seem terribly interested in actually listening to what we have to say: they don’t want to change their minds, they just want to hold on to what they think is right. Second, that someone disagrees with us about a moral matter might lead us to start thinking in “us” versus “them” kind of terms. Thinking in this way could bring along with it biases that lead us to think that “they” not worth listening to, or that “their” arguments couldn’t possibly be any good. This happens all the time when we try to talk politics: we start thinking of the other person not as an individual, but as a member of a group that we don’t like (those heartless Republicans don’t want to listen to us level-headed Democrats, perhaps, or those hippie Democrats don’t want to listen to us level-headed Republicans).

There are other factors that complicate moral disagreements. Consider first the ways in which we might try to resolve disagreements of different kinds. Say, for example, that you and I disagree about the year a movie was released, or what the capital of Indiana is, or how many feet are in a yard. These disagreements are easily resolved: a quick appeal to the internet will settle the matter. Or maybe we disagree about something more complicated: say we work in construction and we disagree about where the best place to build that bridge is. It seems like the best way to resolve this debate is for both of us to present our reasons and evidence, and then, as long as we’re willing to listen to each other, the better plan will become apparent through our conversations with each other. Not all such debates will go so smoothly, of course, but they seem to definitely be resolvable, much more easily than debates that we have about what’s right and wrong.

So here’s where I think part of the problem lies: we can resolve, or at least make progress on disagreements about movie release dates, the imperial measurement system, state capitals, and even optimal bridge placement, by acquiring new knowledge. One of the main reasons we disagree about these matters is that we know, or think that we know, different things. In order to resolve our disagreement, then, we need to get on the same page by knowing the same relevant things. Acquiring this knowledge can be easy, like when we look up something on the internet, or it can be more difficult, like when we need to do more to consider what we have evidence for thinking is true when building a bridge. Either way, we can get this knowledge by listening to others, by consulting reputable sources, and by considering the evidence.

But this doesn’t appear to be how we resolve our moral debates. I can’t look up online how I ought to balance my personal sacrifices against the possible increased wellbeing of others. Actually, I probably can find at least what someone thinks is an answer to this kind of question on the internet. But it’s not going to settle any debates if I point to someone on the internet who says “you should care more about others!” in the way that I can point to the fact that Wikipedia says that “Indianapolis is the capital of Indiana!” It’s also hard to see how I could try to give you the knowledge that I think you’re missing in order to resolve our moral debate: if I think that you really should give more to those who need it, and you think you’re doing plenty already, it often seems like the best we can do is to agree to disagree. But this is not a resolution, it’s a stalemate. As Kayla Chadwick laments, it’s hard to see how we can convince someone of something so basic as the fact that they should care about other people.

So what’s the solution? Here’s a suggestion: perhaps moral debates need to be resolved not by just sharing knowledge with each other, but by seeking out new understanding. This might require helping others see things from a new perspective, or helping them draw new connections between their beliefs that they hadn’t considered before, or challenging conclusions that they’ve drawn in the past, or helping them have new experiences, or all of the above. It may be the case that not all of these tasks can be accomplished just by talking to one another: for example, if you’re really not moved by the plight of someone that you are easily able to help, it’s hard to see how I can get you to understand just by giving you information at the dinner table.

Nevertheless, we might still be able to accomplish at least part of the task of conveying understanding by talking to one another: I might be able to use my words to share experiences I’ve had, or to challenge assumptions that you have made, or to help you see relationships between things you believe that you didn’t realize before. What’s probably not going to work is what works in other kinds of debates, namely the bald presentation of your reasons, or simply telling someone that this is the right way to think about things. The mere fact that you think something is true is probably not going to help me understand why it’s true, and so if we’re going to resolve our moral debates we’ll probably have to work a lot harder.