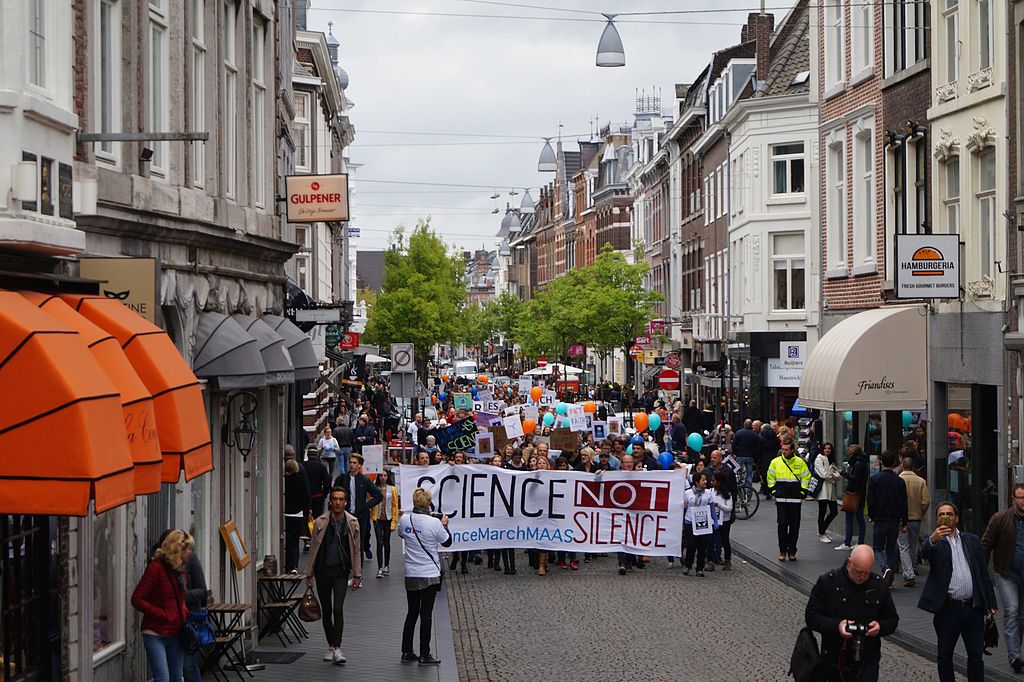 A worldwide march in favor of science was successfully carried out on April 22. It was convoked by a wide range of groups, to be held on Earth Day. The initiative came out as a result of major concerns over President Donald Trump’s policies, which include the disbanding of the Environmental Protection Agency, budget cuts in scientific research, and the elimination of scientists’ roles as advisors in the government.

The march was allegedly non-partisan. But, there are plenty of reasons to think otherwise. Critics of the march have seen it as leftist ideology masquerading as legitimate scientific activity. If, indeed, the march is more about politics and less about science, then that should be of concern to the scientific community.

Make no mistake: President Trump is no friend of science. His populist style appeals to unverified claims (or, as it is now called, “post-truth”), the very antithesis of any scientific procedure. His strongest base of supporters is made up of climate change deniers, creationists and anti-intellectualists who see no significance in scientific activity.

These people, however, need to be brought to the light of science. Some of these people may initially understand the importance of scientific activity, but ultimately become disappointed with scientists, because they seem them as too far to the left. They do have a point. To some extent, science has been hijacked by leftist ideology. If the scientific establishment wants to regain the trust of ordinary folks, then it must do a better job of purging its ideological bias.

Take, for instance, the choice of the day for the march. It was celebrated on Earth Day, an obvious appeal to the importance of discussions on climate change. No serious scientist would disagree that, indeed, global warming is a problem. But, what must be done about it is much more open to discussion. Scientists such as Matt Ridley and Bjorn Lomborg have long acknowledged that global warming is a problem, but at the same time, reasonably argue that short-term initiatives on carbon emission reduction (such the Paris Agreement) are far more harmful for the welfare of humanity. Fossil fuels do contribute to global warming, but they save lots of lives, especially in the developing world.

Sure, something must be done, but reducing economic growth, for the time being, is not a rational solution. A more reasonable alternative, as Lomborg has long proposed, is to invest in research in order to find more efficient ways of developing clean energy without reducing economic growth. Solar panels are not enough. The prospect of nuclear power is much more promising in this regard. Yet, for some strange reason, most ecological groups oppose it, and the scientific establishment does not seem to care. This plays into the right-wing narrative that so-called “science” is more about ideology than about facts.

Unfortunately, the overwhelming majority of people who went to the march in favor of science have a stand that goes far beyond the mere scientific facts on global warming. They make the unwarranted leap from scientific facts to a defense of leftist environmental policy. This is no way to bring Trump’s supporters to the light of science.

Global warming is not the only area where leftist ideology masquerades as science. Take evolutionary theory. Sure, Bible-quoting Creationists feel more at home at a Trump rally than at a scientific lecture on some college campus. And, of course, it is easy to mock people who believe the world is only 6,000 years old and want intelligent design to be taught in public schools. But, unfortunately, the scientific establishment fails to oppose other types of Creationists, the so-called “Creationists of the Mind” (the term was created by scientist Robert Kurzban). This brand of Creationists is made up of leftists who, for some strange reason, believe that Darwinism applies to the body, but not to the mind. They oppose evolutionary psychology on the grounds that it is racist, sexist and an intellectual tool to justify capitalism’s status quo. These Creationists of the Mind were the instigators of the firing of Larry Summers from the presidency of Harvard University, simply because he argued that in some areas of intellectual achievement, women are at a natural disadvantage (as evolutionary psychology claims). This bias in opposing one type of Creationism, but not the other, again plays into the right-wing narrative that the scientific establishment pays more attention to ideology than to facts.

Or, take GMOs. Humans have been genetically modifying organisms for at least 10,000 years. Now, thanks to impressive advances in genetics, we have the technology to do so even more efficiently. It is not hyperbole to claim that GMOs have the potential to solve the problem of world hunger once and for all. And yet, the scientific establishment is too timid to fully embrace GMO research and strongly refute those environmentalists who oppose these technologies (although it must be acknowledged that more than 100 Nobel laureates recently signed a letter defending GMOs).

The recent march in favor of science on Earth Day tried to build the narrative that anti-science is exclusively right-wing. That is clearly not the case. Alex Berezow and Hank Campbell make an extensive argument exposing the fallacies of the anti-scientific left, in their acclaimed book Science Left Behind. The scientific establishment should take note. Science is worth marching for. But, when that march becomes more of a ruse to propagate leftist ideology, it is ethically objectionable. Science needs all the support it can get, and it needs to persuade people to abandon their anti-scientific view of the world. But, when the scientific establishment is itself sequestered by some people who seem to care more about ideology than about facts, it fails in its attempt to bring the likes of Creationists and climate change deniers, to the light of science.