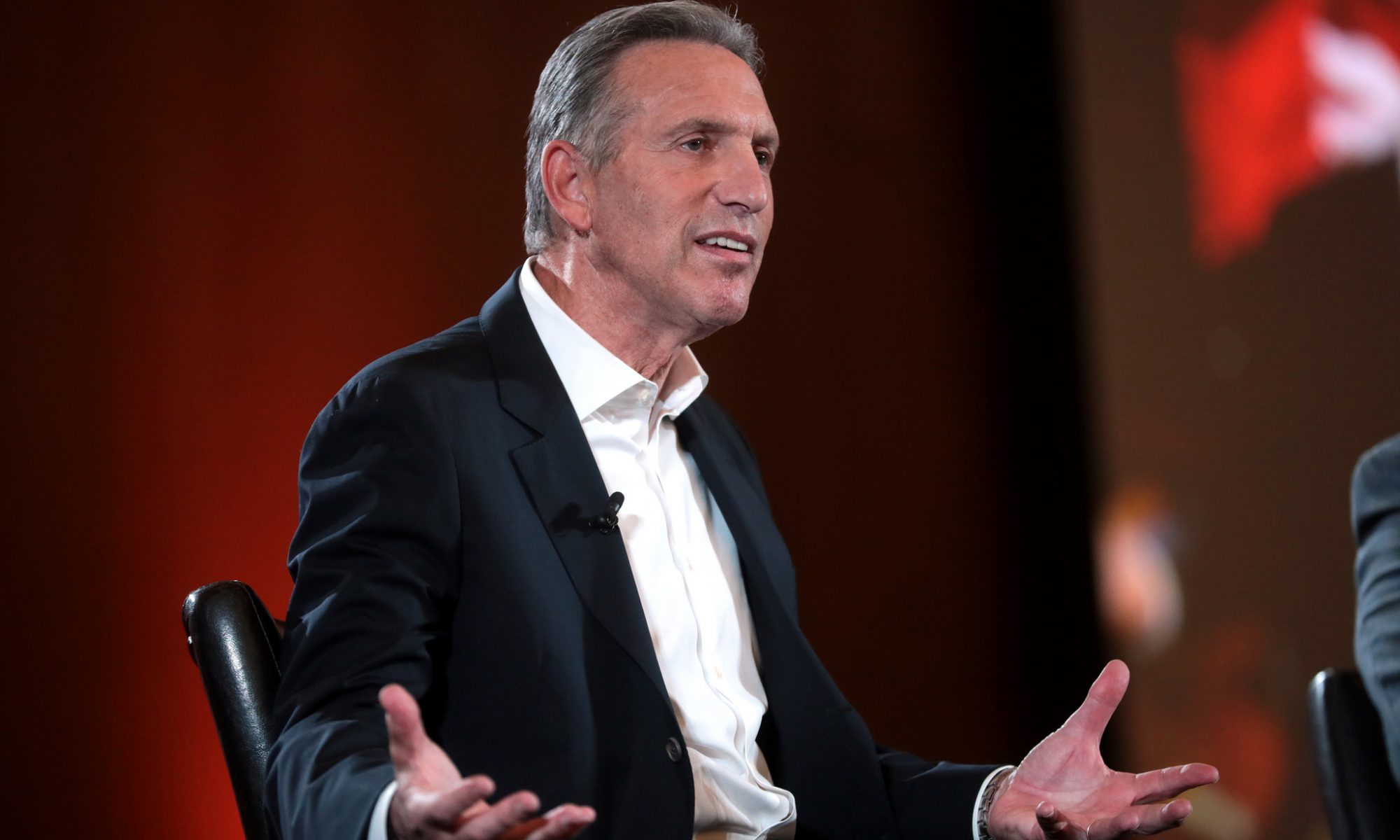 It is no secret that hyperpartisanship amongst the American electorate is rampant and is only growing worse. In 1994, 17 percent of Democrats had a very unfavorable opinion of Republicans, with that number at 21 percent for Republicans’ attitudes towards Democrats. As of 2016, those numbers have risen to 55 percent and 58 percent, respectively. About eight-in-ten Americans now even say that Democrats and Republicans cannot agree on basic facts. This partisanship has had a paralyzing effect on American political functions in recent decades. The 100th U.S. Congress (1987-1988) was able to pass 7 percent of bills that hit the floor into law. For the 115thU.S. Congress (2017-2018), that number has been cut by more than half at 3 percent. However, at what appears to be the pinnacle of American partisanship, a push for centrism has emerged amongst the candidates for the 2020 presidential race.

Ex-CEO of Starbucks, Howard Schultz, announced he is “seriously considering” a presidential bid as an Independent in January of this year. In a statement he wrote on Medium, Schultz called out hyperpartisanship, accusing  “the far right and the far left” of “holding our government hostage by engaging in revenge politics and preventing sensible solutions to big challenges.” He highlighted America’s “broken two-party system” which fails to give power to every person’s vote, and emphasized most Americans’ desire for “cooperation in Washington.” The solution to America’s shortcomings, in Schultz’s opinion, is to have a “credible, centrist independent on the ballot in all 50 states.” Schultz appears to believe that this “credible, centrist independent” is himself, given his interest in casting a presidential bid. Despite his apparent devotion to truly representing the American people, Schultz appears to be lacking a platform.

In an interview with CNBC, Schultz gave hollow answers about his political positions. For instance, when pressed about immigration, Schultz stated that the U.S. should pursue a “good immigration policy.” Similarly, when asked about the national debt, Schultz claimed that the debt is “the greatest threat domestically to the country,” but made no allusion to how it should be addressed. According to his original statement on Medium, his primary policy strategy is to “draw upon the best ideas from all sides.” Yet, on the issues, it seems as though Schultz is merely criticizing both sides of the political spectrum instead of highlighting their best ideas. A lifelong Democrat up until this point, Schultz believes that the Democratic Party is moving too far to the left, and has expressed disdain for Alexandria Ocasio-Cortez’s proposed Green New Deal. Schultz has been less specific in his criticism of the right, but has made his distaste for President Trump very clear, accusing him of “creating episodic chaos every day.” In an interview, Schultz claimed, “I will do nothing on any level to proceed [in his campaign] if I thought that in proceeding I would in any way persuade Americans to vote and re-elect Donald Trump.” Since Schultz was a lifelong Democrat, one might expect it would most effectively block Trump from being re-elected if he ran as a moderate Democrat and pushed bipartisan policy from there, as it would mitigate the risk of him splitting the Democratic vote. However, Schultz insists on running his campaign as an Independent, making it appear as though he expects the American people to trust him to be the solution to the nation’s woes. Schultz wants to run for president not because he believes he can fix hyperpartisanship, but because he believes he is entitled to the post.

Schultz’s ego infiltrating the political sphere is not an isolated case, nor have political egos ever been uncommon. The ex-CEO considering a presidential bid simply because he can afford to do so is somewhat reminiscent of Victorian-era monarchs and industrial party bosses from the U.S.’s Gilded Age. While those examples both lie in the extreme, ego in American politics now shows itself in more subtle ways. For instance, just earlier this month President Trump autographed Bibles while on a trip in Alabama to survey disaster damage from recent tornadoes. Similarly, and also occurring earlier this month, Senate Majority Leader Mitch McConnell blocked a sweeping voting rights bill from reaching the Senate floor. When asked why he would not even see the bill, McConnell responded simply by saying, “Because I get to decide what we vote on.” The egos that dominate the political sphere also trickle down to infect public discourse.

While not a direct cause, inflated egos in American politics definitely contribute to the nation’s hyperpartisanship. The most apparent example of this relationship is the bloated field of candidates for the 2020 Democratic presidential nomination. So far, 13 candidates have announced their campaigns, while two more have announced exploratory committees. The large number of candidates has already begun a trend of hyperpartisanship within the Democratic Party, with centrists and progressives settling in to polarized camps. This not only poses the risk of the Democratic Party dividing itself and alienating potential voters, but also of an unrepresentative candidate being nominated as happened with Donald Trump and the Republican Party in 2016 (the largest primary in American history). This is not to say that all of the Democratic candidates are running glamour campaigns, and even those who are do not rival the ego of Howard Schultz.

Schultz poses a particularly interesting case in ego politics, as he claims a platform of bipartisanship, while espousing beliefs that deepen partisan ties. In merely criticizing Democrats and Republicans alike, Schultz does not draw people closer to the center, but drags them further into negative partisanship. In order for centrism and third parties to be successful, they must forge their own path in addition to highlighting the shortcomings of other parties. This work, however, does not begin with a presidential candidate, but with a shift in political culture. A major weakness of centrism, and of third parties in the U.S. in general, is that it tends to lack a direct path.  Third parties in the U.S. typically fall into defining themselves by relative comparison to what they are not or what they are against, making them more susceptible to becoming about candidates rather than about ideas (as is the case with Schultz). Thus, Schultz’s potential campaign becomes a test for American centrists to either accept unhelpful criticism without resolve in supporting Schultz, or to forge their own initiatives to escape polarization if they truly wish to do so. America’s two-party system deserves to be reevaluated, but jumping onto the political scene without solutions does not offer any potential for progress.