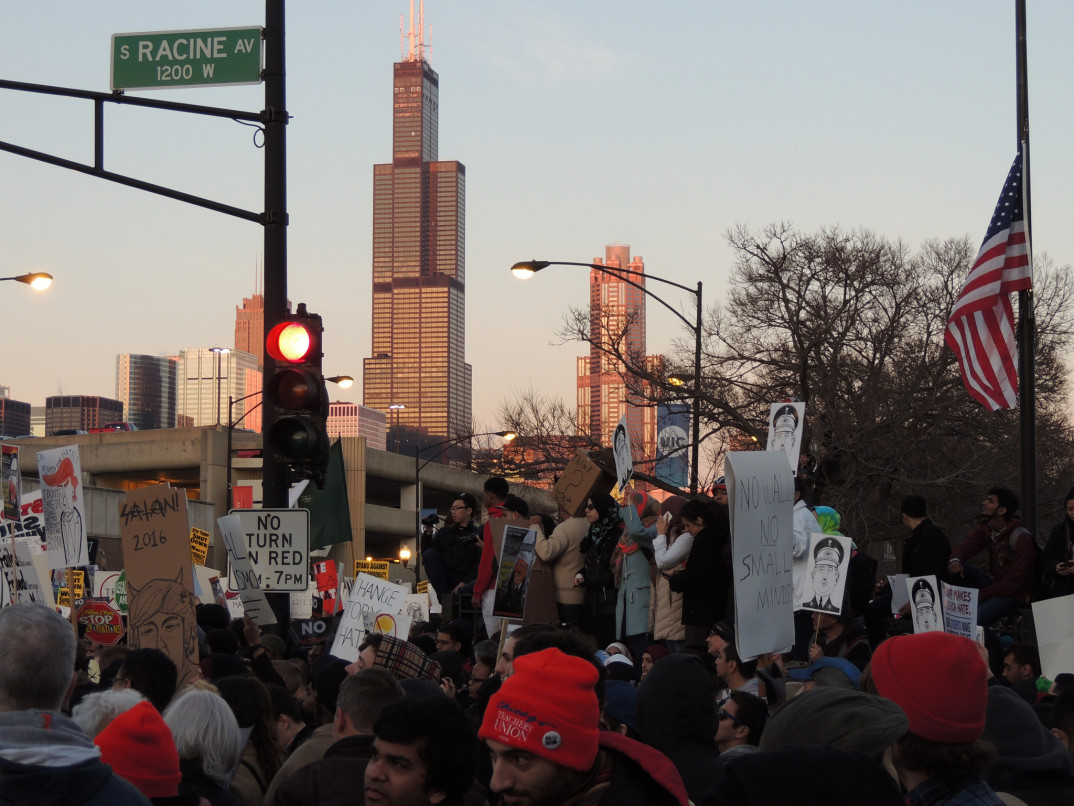 “And these children that you spit on,
as they try to change their world”

The observation goes back at least to Bertrand Russell of an inverse correlation between how adamant a person is in their opinion and how much they know about the topic, but nowhere is this more starkly illustrated than when we come to questions of grassroots movement strategy. It seems every pundit this week – from the Daily Show to the New York Times to Fox News – has felt the need to weigh in on the protests that shut down Trump rallies in Chicago and elsewhere. And the consensus is that the protestors are SOOOOOO naïve. As Trevor Noah so respectfully put it: “It’s like trying to put out a fire by putting wood on it.” … “Ah yes, trust Bernie Sanders’s fans to have an unrealistic view of what is actually happening.”

Why this systemic condescension? In the NYT case, we are treated to a poll suggesting that many of those on the other side are really angry about the disruptions. In other cases, it is little more than a priori intuition, or some vague reference to the fact that Trump says he has enemies and now protestors are proving it.

But the question of how to effectively respond to a growing neo-fascist movement – one that has been building in this country for the last 30 years, involves a deeply disaffected and heavily armed population in control of many local governments and with a disproportionate representation among police and the military – is an empirical one. And in the case of most complicated empirical questions, it isn’t a bad idea to actually look at some research before launching into a lecture.

There are a number of routes to gaining knowledge of movement strategy, to a more informed judgment about the likely long-term effects of tactical decisions in a movement. You could read historical accounts of movements around the world and try to discern patterns. (One might start with books like Guns and Gandhi in Africa – ed. Bill Sutherland and Matt Meyer; or Protest, Power, and Change ed. Roger Powers, et al.)

You could read the extensive social science literature on how movements develop and when and how they succeed. (See, for example Why Civil Resistance Works and other work by Erica Chenoweth, or Stellan Vinthagen’s A theory of nonviolent action: how civil resistance works, or a text like Social Movements, by Suzanne Staggenborg, just for starters.)

Or you could gain some skills “on the job” by actually participating in the work over a long period of time. (Or at least read some of the experiences of folks who have, for example the
marvelous collection We Have Not Been Moved, ed. Elizabeth “Bettita” Martinez et al.)

People who are most knowledgeable in all these ways tend to be epistemically humble – to realize that it is very hard to predict the long-term effects of various actions. But they do, at least, realize that there are many complex and often competing dynamics and come to recognize some of the issues that go far beyond the local and immediate reaction. For example, one point of many movements is to make structural violence explicit and obvious. In the Civil Rights Movement, the daily indignities, oppression, and thwarting of life by segregation inflicted all manner of violence on blacks. But this daily violence of the system was easy to ignore. When people sat down in segregated restaurants, or walked together over a bridge, however, preserving the Jim Crow order required the use of literal guns, fire-hoses, chains, beatings, and jail. And the violence of beating children was something that others could see and react to far more easily than daily indignities and “dreams deferred.” Critics then, as now, said that these confrontations precipitated violence. And in one sense, of course they did. That was the whole point. They brought out direct, person-to-person violence. But the violence was always there, just operating in the shadows, where oppression always grows best.

And by pulling violence out of the shadows – turning in-group organizing to deport Latinos, ban Muslims, reintroduce torture, bomb more civilians, demean and oppress women, etc. into an open direct confrontation – one forces the masses of apathetic or undecided Americans to confront the situation. Yes, many of the readers of this blog hear of nothing else, but the majority of Americans do not vote, and are woefully ignorant of what is going on either in towns like Ferguson or in Trump rallies and Klan meetings. The long-term effects on this population is far more important to the evaluation of a movement tactic than the short-term effect on someone already convinced of neo-fascist ideology.

Or consider the way that movements put issues and concepts into the public debate. Would everyone talk about “the 1%” without Occupy? Would anyone be debating “Black Lives Matter” without Black Lives Matter, Ferguson Frontline, and other militant protests?

But the main point is that if you haven’t made an attempt to educate yourself in any of these ways, you really should consider the possibility that you have no opinion worth listening to. Rather than jump on a soap-box and lecture people who have been studying and practicing movement politics their entire life, might I consider listening and learning instead? It may, in the end, be a bad idea to directly confront Trump’s neo-fascist rallies, but the pundits insisting on this haven’t a clue. They aren’t even so much as attending to the complex long-term dynamics of how right-wing movements grow in in various political contexts, of how left-movements are nurtured, developed, and given confidence, or the way that apathetic or ignorant people are pulled into the conflict.

Take a moment to hear from the organizers about their goals and strategic vision. Take a social movements course. Take a movement history course. Take a peace studies course. Take my course Nonviolence: Theory and Practice, or one of the hundreds of similar courses around the country. Go to a meeting of the Peace and Justice Studies Association.

Otherwise, seriously, just stop. The “children” “are immune to your consultations.” And that is a very good thing.