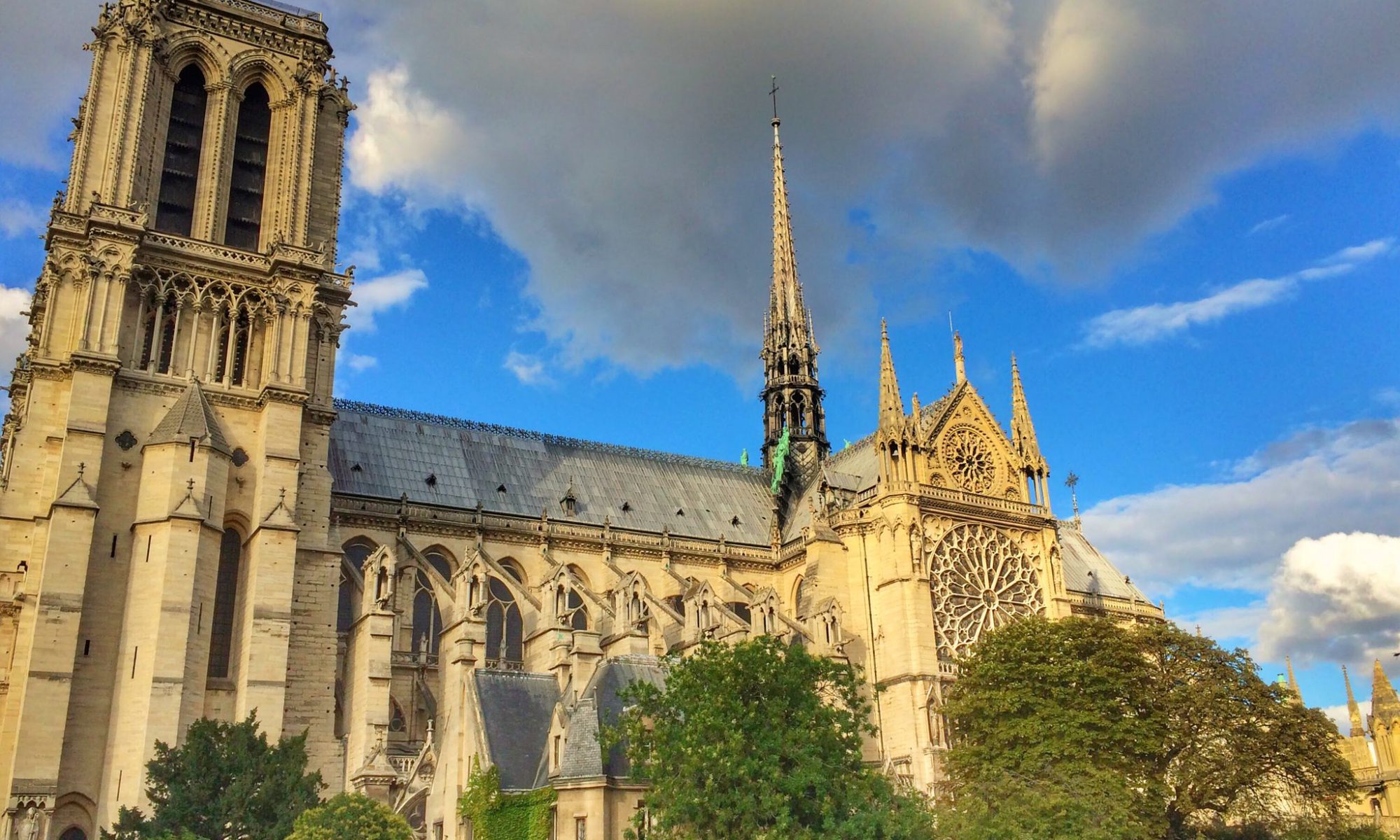 On Monday, April 15, viewers looked on in horror as Notre Dame Cathedral was devastated by fire. Onlookers hoped that the flames would be fought back before too much damage was done, but the cathedral’s spire came crashing down, taking much of the roof with it. The extent of the damage remains to be seen.

Construction on the stunning piece of gothic architecture began in 1163, and the wood out of which it was built was taken from trees that are hundreds of years older.  Among other noteworthy events, Henry VI of England was crowned King of France inside of Notre Dame in 1431, and it was also inside its walls that Napoleon Bonaparte was crowned emperor in 1804. Perhaps Notre Dame is most famously known for the attention drawn to it by Victor Hugo in his 1831 novel The Hunchback of Notre Dame. The now classic novel raised awareness of the dilapidated condition of the cathedral at that time, and led to restoration and greater appreciation for the historic site.

The landmark is valuable for many reasons. Arguably, it has both instrumental and intrinsic value—that is, it has value both in light of the joy it brings to people, and value in its own right. Some argue that cultural artifacts that have stood the test of time have intrinsic value in light of their continued existence. The more important events take place within a structure, and the more tribulations that structure withstands, the greater its value in this respect. Key historical figures participated in sacred rights in its chapels. This sets the cathedral apart from most other buildings with respect to significance.

The cathedral is also one of the most beautiful buildings ever constructed. All things being equal, it is a tragedy when a thing of beauty is destroyed. Art and architecture have the potential to represent the heights of human creativity. The building is not simply beautiful to look at; it expresses something both existential and essential about the human ability to bring monumental, almost inconceivable visions into reality. As a result, when a building like this is destroyed, it hurts us all in a way that is difficult to fully articulate. The building was a testament to our values, our resilience, and the transcendent ability we have to express appreciation of those things we take to be deserving of our best efforts.

Notre Dame speaks to us all in the way that all great works of art do. It is especially significant, however to French citizens. The art and landmarks of a country are a tremendous source of pride for its citizens, and the destruction of Notre Dame no doubt changes how it feels to be French.

Finally, Notre Dame has substantial religious value for many people. Pilgrimages are made to Notre Dame frequently—an experience at the Cathedral is often a profound one. Notre Dame is home to artifacts that many consider to be relics, including a crown of thorns purportedly placed on the head of Christ, a piece of the “true cross,” and a nail from that cross on which Christ was executed. These relics were salvaged from the flames, but the fact that the Cathedral was the sacred home to such important artifacts in Catholic history highlights the gravity of the loss of the structure.

In light of all of these considerations, our hearts rightly ache at the thought that Notre Dame will never be exactly what it once was. There seems to be no question about whether renovations will occur. In the immediate aftermath of the destruction, Emmanuel Macron, the President of France, vowed to rebuild the beloved landmark, commenting that, “We will rebuild Notre Dame even more beautifully and I want it to be completed in five years, we can do it. It is up to us to change this disaster into an opportunity to come together, having deeply reflected on what we have been and what we have to be and become better than we are. It is up to us to find the thread of our national project.” Restoration experts anticipate that the project will take closer to ten to fifteen years. Before construction can even begin, the site must be secured—a substantial task on its own.

To advance the objective of renovating the building, both individuals and private organizations have, in the immediate aftermath of the fire, donated hundreds of millions of dollars to renovate the cathedral. The combined donations of the L’Oreal cosmetics company, the Bettencourt Meyers family, and the Bettencourt Schueller foundation came to 226 million. On Tuesday, the CEO of Apple, Tim Cook, pledged a donation of an unspecified amount to restoration efforts. The University of Notre Dame in the United States pledged $100,000 dollars to the cause. Many individuals and institutions understandably don’t want the iconic building to remain in a skeletal form of its former glory.

This event raises interesting philosophical and moral questions about the causes that motivate us to come together to donate resources. The reasons one might want to donate to the renovation are clear. In addition to the recognition of the value of Notre Dame across a variety of domains, people want to continue to have meaningful experiences at the site, and they want future generations of people that they care about to be able to have such experiences as well. It is unsurprising that we should feel motivated to donate money to preserve things that help provide meaning to our lives.

These are moments in which it is appropriate to be reflective about what charitable giving should look like. One important question to ask is, “is charitable giving superogatory?” That is, is it the case that donating money, time, and effort to the world’s problems is something that it is good to do, but not bad not to do? Or is charitable giving, when one has discretionary resources, the kind of thing that we are morally obligated to do, such that we would be remiss, morally speaking, if we failed to do it?

A situation like this might also give us cause to reflect on the motivation and reasoning behind charitable donation. Should we pull out our pocketbooks whenever we feel a tug at our heartstrings? Should we be primarily motivated to donate to those causes that are near and dear to us, such as local causes or causes to which we otherwise feel a close personal connection? It may be the case that feeling satisfaction in response to making a donation of a certain type plays an important role in motivation to donate again in the future. For example, the public’s passion for donating to renovate to Notre Dame has motivated people in Louisiana to rebuild three churches that were seriously damaged by arson that are located in historically black neighborhoods. People recognize the value that churches often have for communities, and this tragedy has put them in the giving spirit.

An alternative theory about how our charitable funds should be directed is that we should give our resources to those causes where our money would do the most good. Imagine that your money could either go to a cause that prevented 1 unit of suffering, or it could go to cause that prevented 5 units of suffering. Intuitively, we should prevent more suffering when we can, so the rational choice is to donate to the second cause. Are we morally obligated to make our decisions in this more calculated way?

Hundreds of millions of dollars could go a long way to prevent needless suffering in the world. Millions of people die of preventable diseases every year. Countless people don’t have reliable access to food, shelter, clean drinking water, and basic medical care. In a world in which people collectively have hundreds of millions of dollars to spare, is it morally defensible for that money to be spent on the restoration of a building, no matter how beautiful or historically significant that building was?

Some might think that the answer to this question is yes. There are some human cultural achievements that we simply must preserve, if we are able. If we accept this conclusion, however, we must also be willing to admit that the preservation of some art seems to be more important to us, as a human family, than the suffering of our fellow beings.