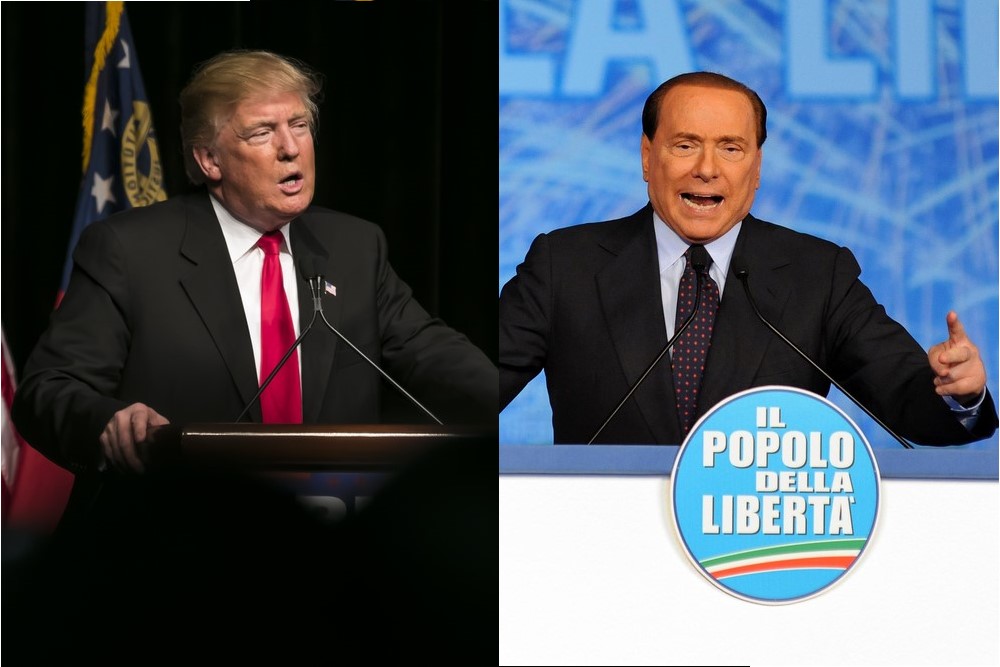 Since the election of Donald Trump, political experts have launched themselves into a comparison with his Italian version: Silvio Berlusconi. From his billionaire status to his physical height, the similarities between the two have been carefully examined in the hopes that the US could learn from Italy what to expect from the Trump administration. The comparisons made sense: Berlusconi and Trump indeed share many common traits. Their treatment of women and people of color, their financial privilege, their troubles with the law, their approach to tax evasion (as something to be flaunted instead of ashamed of), and their dismissal of journalism. Yet perhaps because the Trump administration created issues that a comparison with Berlusconi could not have helped solve, the similarities fell into silence. Until now.

On Thursday, just hours before his presidential debate with Joe Biden in Nashville, Trump released footage from his interview on CBS’s “60 minutes.” The video showed the president abruptly leaving the interview, calling the correspondent’s approach “no way to talk.” The interviewer, Lesley Stahl, is shown doing the job that a journalist should be doing, and doing it well: she asked challenging questions, questions that any politician would prefer not to answer, and she asked persistently, leaving no room for presidential monologues. The comparison with Berlusconi is unavoidable. In 2006, while Berlusconi was Presidente del Consiglio (the Italian version of Prime Minister), he was invited to be interviewed in “In Mezz’Ora” (“In Half an Hour”), a show conducted by the journalist Lucia Annunziata. Known for her professional and serious temperament, Annunziata kept asking pressing questions to Berlusconi, who eventually decided to leave the interview halfway through. While shaking her hand, Berlusconi scolded Annunziata for her “unfair treatment,” hinting at her alleged leftist bias. The similarities with Trump are particularly striking. Both time-constrained interviews (60 minutes in Trump’s case and 30 minutes in Berlusconi’s case) feature women interviewers relentlessly pressing for an answer that is concise and to the point.

Trump and Berlusconi’s reaction to their interviews also share similarities. In both, they complain about having been unfairly treated, hinting at the seemingly aggressive temperament of the interviewer who did not give them the opportunity to respond. In truth, both interviewers did give them time to reply, but not in the way Trump and Berlusconi are perhaps used to: by responding with overly long speeches about their achievements and ultimately avoiding the question.

What should we make of this comparison? I think the lesson to draw here is a double standard: both Trump and Berlusconi have a hard time maintaining poise in challenging interviews. Granted, interviews can feel like a difficult battle, a back-and-forth that hardly leaves time to breathe, but that rhythm is exactly what is so particular to journalistic style. Interviews are not – and should not – provide a sympathetic atmosphere where candidates can let themselves indulge in long responses that tout the importance of their qualities. Rather, they are a moment of scrutiny where one’s articulate responses are tested. Both Trump and Berlusconi fail the test: they show that they do not know how to deal with journalists (a remark Annunziata makes when leaving the show after Berlusconi storms out). This kind of behavior also hints at the inability to take one’s own medicine.

In the first debate with Joe Biden, Trump relentlessly interrupted the former vice president, often talking over him, and was repeatedly scolded by Chris Wallace, the moderator. If that is an acceptable way of interacting during a debate, then it should be so when other interviewers occasionally interrupt him to obtain a clear answer. Yet, to Trump it isn’t. Right before leaving his interview, Trump chastised Stahl’s approach as “no way to talk.” Notice the double standard here: it is no way to talk when such behavior is directed at him, yet it is acceptable when directed at others. The double standard brings to the surface a somewhat incoherent behavior. And this incoherence is more of a logical problem, rather than a political one. A double standard is not a formal fallacy, that is, a poorly construed argument, but it highlights an inconsistency between words and actions. Trump’s behavior towards Biden during the first debate paints a relentless exchange, yet his verbal remarks about Stahl’s approach toward him tell a different story: they lead to the conclusion that Trump will not endure such tough treatment.

Do we have an obligation to being consistent? Deeming a practice as wrong and nevertheless performing it might make one vulnerable to charges of moral hypocrisy. While it might be difficult to be consistent, our politicians should strive to meet this challenge. Avoiding special treatment and refusing a double standard sends a positive message: one that embraces reciprocal treatment and suggests that those who represent us are not above us.