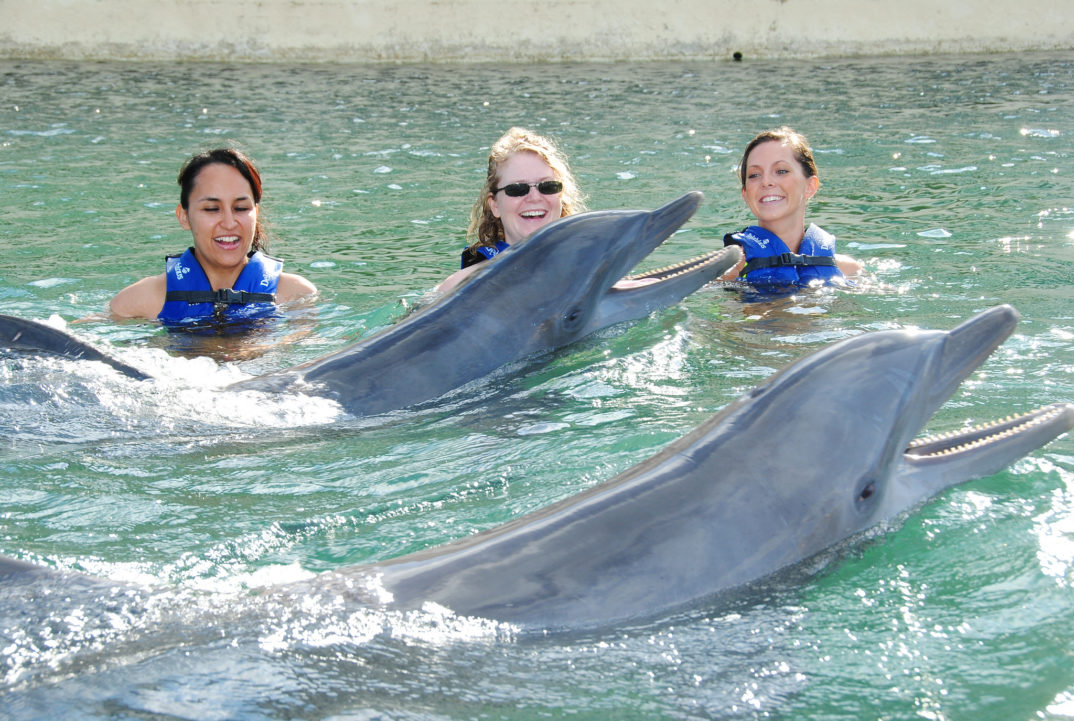 As winter quickly approaches, many people seek an escape from the cold by planning a tropical vacation. These trips to paradise frequently include interactions with the area’s sea life, including the beloved “sunset dolphin cruises” and “swim with dolphins” programs for which many tourists try to book tickets. However, seldom do we think about what those exclusive experiences mean for both captive and wild dolphins, and how tourist money continues to fuel an industry centered around the exploitation of wild animals. We must collectively evaluate these human-dolphin interactions and pursue methods to educate the general public about the impact of their support for these organizations, which despite popular claims do not benefit the dolphins.

Ruthanne Johnson wrote an article for the Humane Society of the United States in which she explores how popular animal attractions may not actually have the animals’ well-being in mind. She discusses “swim with dolphin” experiences specifically, stating, “When strangers aren’t hanging on to their fins for a swim, the animals who swim long distances in the wild, are relegated to enclosures the size of a backyard pool. They may appear to be having fun, but they are merely doing the job.” In fact, Naomi Rose, who is a marine mammal scientist with the Animal Welfare Institute, discusses the fact that these interactions with tourists have a negative impact on the animals, which could induce dangerous behavior: “dolphins have bitten, rammed and pushed people and male dolphins have shown sexual aggression toward tourists.”  And all of this is without mentioning the transmission of diseases such as tuberculosis and the common cold due to close proximity between humans and captive dolphins.

While Johnson discussed the impact of interactive programs with dolphins in zoos, Christina Russo focuses on dolphins in the Caribbean where swimming with these wild creatures has become an increasingly popular activity. Resort facilities are a common place for these attractions, and one trainer in the Caribbean talked about his concerns with the high number of dolphins enclosed in shallow cells. He estimated that there were “about 40 dolphins caged in three compact cells and within a resort – debris like nails and fish hooks would float in from the ocean.” He echoes the statements from Johnson which outlined the toll these interactions takes on the dolphins:

“They were also under extreme pressure to perform, which may have made them dangerous to humans, they did 10 interactions a day – the same motions, the same speech, the same signals over and over. They would get frustrated and aggressive to guests or knock food buckets out of our hands.”

The obvious alternative for curious individuals would then be to seek out interactions with wild dolphins. However, Virginia Morell published an article for Science which explores why that might also be a detrimental choice. A study was done on Spinner dolphins in Hawaii and the impact tourism had on their wellbeing, The findings demonstrated that because tourist interactions occurred during a critical period of the day in which the dolphins would normally be resting or sleeping, the interruption by humans in the water caused a lack of sleep and as a result there were far fewer spinner dolphins in the lagoons over consecutive years. Interestingly, researchers also found that due to lack of rest the spinner dolphins were performing more aerial displays than dolphins in areas with little to no tourism. Contrary to popular belief these displays are not a sign of playfulness, but rather of distress. These results allow for not only an assessment of captive dolphins’ treatment, but also further education on tourism taking place in these animals natural habitats.

Now the question that remains is, “if not through zoos or theme parks, and not the wild swimming with dolphin excursions,” how is the average individual meant to witness the beauty of these creatures without causing harm? Meagan Salder attempts to answer this question by speaking to the head of the marine research program at the Hawaii Institute of Marine biology. Lars Bejder reiterates the importance of respecting dolphins’ space, especially because a breach of those spaces at the wrong time by humans could result in heightened levels of stress for the entire pod. In terms of determining which tours are best for the dolphins’ safety, Dolphin SMART was created as a partnership between the NOAA (National Oceanic and Atmospheric Administration) office for marine sanctuaries and the Whale and Dolphin Conservation Foundation. It functions as a tool created by conservation agencies to help tourists see which experiences are best for the wellbeing of the animals. Their mission is “To promote responsible stewardship of wild dolphins in coastal waterways,” and the easy-to-remember acronym describes rules to integrate when viewing dolphins. “S” stands for stay back at least 50 yards, “M” reminds us to move cautiously away from a dolphin showing signs of distress, “A” is to always put your engine in neutral around dolphins, “R” is to refrain from feeding, touching or swimming with the wild dolphins, and “T” is to teach others to be dolphin smart. Consumers should keep an eye out for tours which are certified Dolphin SMART, and be sure to implement the rules outlined by dolphin and whale conservation organizations when going out on their own boats.

Naomi Rose makes a good point about the intentions of many tourists when buying tickets to interact with dolphins: “People swim with dolphins because they want a magical experience, or they may believe they are supporting conservation efforts.” However, we have seen that these particular interactions are not conducive to human or animal safety. Thoughtful information about the impact of these activities published by marine conservation organizations will better help individuals to make educated decisions about which experiences they choose to engage in, and as a result encourage them to fully commit to the wellbeing of the dolphins they hope to see.