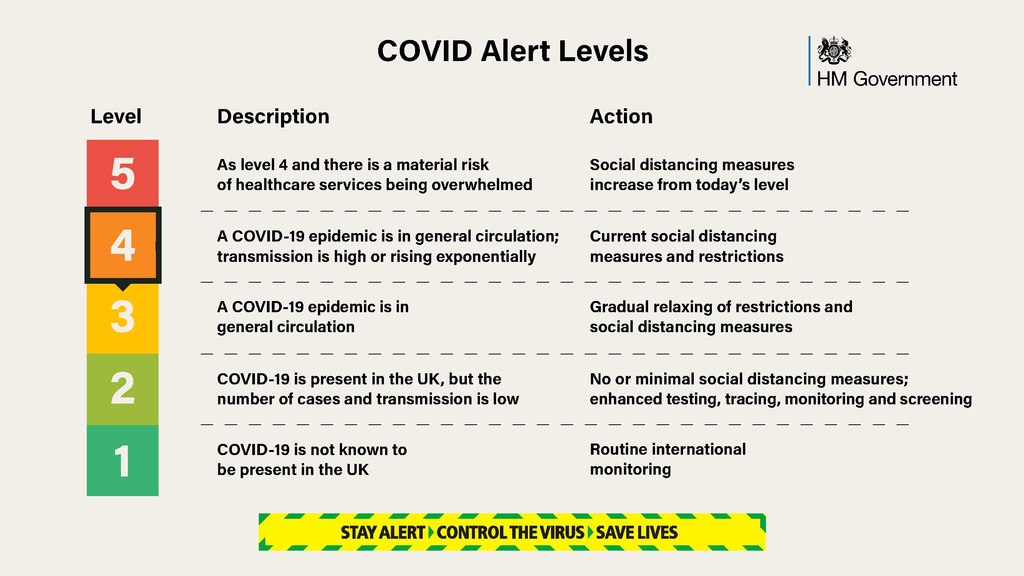 As states around the country ease lockdown restrictions, some are putting into place systems advising people about threat levels. In some states, these are color-coded systems that strongly resemble the Homeland Security Advisory system, put into place by George W. Bush to inform people about the risk of threats from terrorism after the September 11th terrorist attacks.

It’s important to remember that there were lots of serious problems with the Homeland Security Advisory System, and it was eventually abandoned and replaced. Many of the problems had to do with the fact that color-coded systems are vague by their very nature. People have a sense that red means “stop” and green means “go.” Very few people will investigate the situation further. As a result, these systems are easily manipulated for political purposes. Color-coded systems don’t encourage careful, responsible thinking about risk. They encourage behavior motivated by sentiment rather than reason, and sentiment is easily coerced. Politicians tend to be excellent at cultivating certain kinds of common sentiments that drive political behavior and the Homeland Security Advisory System roused both fear and xenophobia. These are powerful forces and invoking them caused people to make voting decisions that they might not otherwise have made, to support wars they might otherwise have found unjustified, and to accept unprecedented privacy violations on the understanding that they were being protected from imminent harm.

Color-coded responses to coronavirus operate according to similar principles. If people want to know the current level of danger posed by coronavirus, they should be paying attention to the relevant data. How many new cases is a state discovering each day? What are the hospitalization rates? How many people are dying? These color-coded systems are not responsive to these important considerations. For example, there was recently a major outbreak of coronavirus at the JBS meatpacking plant in Hyrum, a city in Northern Utah. The outbreak was the biggest hotspot yet discovered in the state. At this point, 287 workers at the plant have tested positive for COVID-19. This meat packing plant refuses to shut down or to give employees meaningful time off to heal.

Hyrum is in Cache County, and despite the unknown extent of the spread, Cache County remains in the yellow “low risk” zone. In fact, even in light of the outbreak, the Cache County Council voted to request that the county be moved to the green designation. As one councilperson put it, “I’m in the age group that’s most likely to die, but I’ve had a good life and I say let’s get on with it. That may sound like I’m being pretty casual about it, but that’s the way I feel.” If an area like Cache County requests a green designation on the basis of these kinds of considerations, the system is not responsive enough to actual data.

The Cache County example also illustrates the point that these vague, color-coded systems track not a set of facts, but a set of values. Many states have decided that thriving economies are more important than the lives of the vulnerable, but they haven’t exactly made this value judgment explicit so that people can evaluate it and respond accordingly. Instead, the values are obscured by color designations that look for all the world like they are based on public health considerations.

Instead of motivating people with fear, coronavirus color-coding systems encourage a different form of cognitive bias—wishful thinking. People across the country are sick of lockdown. They are exhibiting quarantine fatigue. They are sick of travel restrictions and of being prevented from engaging in their favorite consumer activities, especially during the summer. The fact that coronavirus cases have reduced dramatically in places like New York is causing the national curve to flatten. This doesn’t tell us anything encouraging about what is happening across the rest of the country. People have self-interested reasons to interpret the numbers favorably, even though there is no evidence-based justification for doing so. These warning systems also undercut good critical thinking practices in another way—they encourage people to disregard the advice of experts on infectious disease. The best available evidence we have now suggests that people should wash their hands regularly, maintain social distance from others, and wear a mask in areas where social distancing is difficult. It’s hard to get people to engage in these practices regularly anyway, and it is even more difficult to convince them that they should be doing so when their county is in a yellow or even a green risk designation.

At least in Utah, these systems do track some data, but not the data people might be inclined to believe. They are not tracking information relevant to whether people are actually safe to participate in social and consumer activities again. Instead, decisions are being made on the basis of how many hospital beds are available in a given area. The concern is not about whether people will contract the disease, but about whether health care systems will be overwhelmed if and when they do. This isn’t a metric we would stand for in other cases. Consider the following analogy. City officials are aware that the water at the local beach is infested with dangerous man-eating sharks. They are tasked with making recommendations about the safety of getting in the water. Tourism to the beach generates a lot of revenue every year, so it is in the state’s interest for the water not to be infested with man-eating sharks. Officials determine that the health care system is well equipped enough to treat people for shark bites, so they advise people that it is safe to swim in the water. Presumably, residents would think that this was an unconscionable decision and there would rightly be a degrading of trust in the public officials that were so callous with people’s lives.

The Homeland Security Advisory System was eventually replaced with the National Terror Advisory System, which was designed to “more effectively communicate information about terrorist threats by providing timely, detailed information to the American public.” Both terrorism and public health are high information issues about which it is difficult for the public to be fully informed.  Nevertheless, we should encourage people to be engaging with actual data rather than with colors that lull them into a false sense of security.