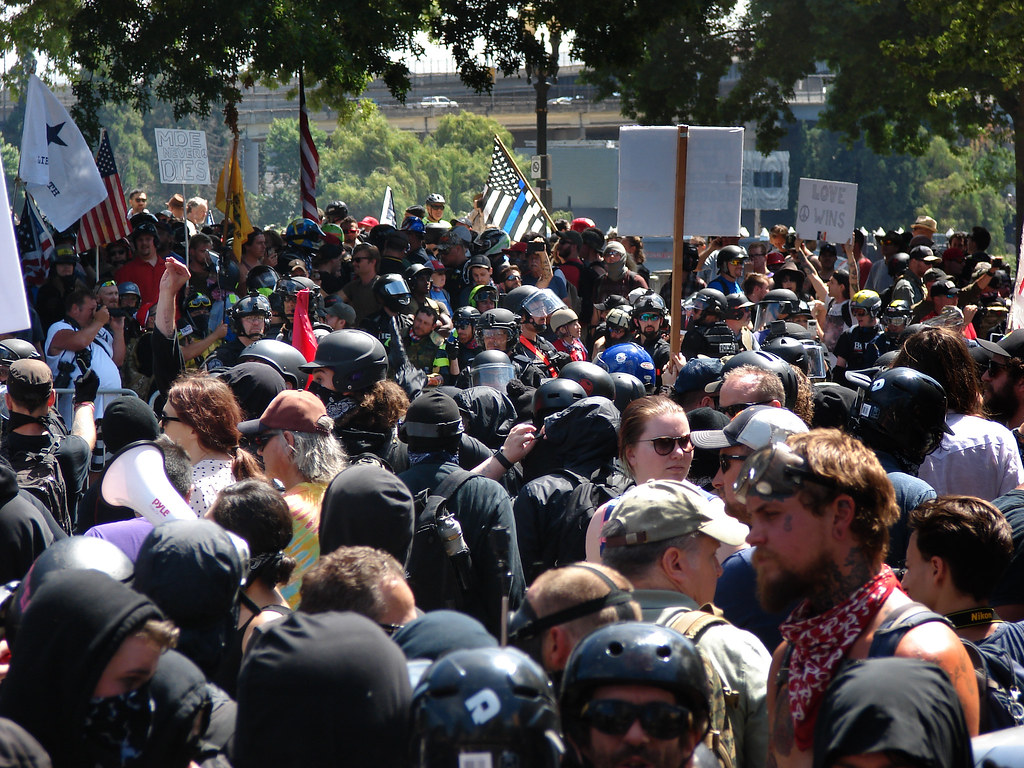 In the wake of the April 27th, 2019 shooting at the Chabad of Poway synagogue in San Diego County, California, fears of a rise in modern antisemitism continue to grow. The gunman that opened fire on the congregation’s Passover worship—killing 60-year-old Lori Kaye and wounding three others—posted an “open letter” filled with political conspiracies, racial slurs, biblical scripture, and Christian theology to the website 8chan shortly before the attack. The gunman’s rhetoric and motives classify him as a member of the alt-right: “a range of people on the extreme right who reject mainstream conservatism in favor of forms of conservatism that embrace implicit or explicit racism or white supremacy.”

For the most part, the internet is the primary radicalizing force for alt-right members. Website chat-rooms like 8chan and Gab, flaunting the value of free speech, attract people hoping to share their odious views and plan acts of violence. In corners of the internet, hate and ignorance combine for deadly affect. In his Prindle Post article, author Alex Layton examined the role that antisemitic political conspiracy played in the October 27, 2018 attack on the Tree of Life synagogue in Pittsburg, noting that the shooter “bought into [and was motivated by] a conspiracy that the Hebrew Immigrant Aid Society (HIAS) was leading the caravan of refugees who have been migrating from Honduras to the U.S.-Mexico border in recent weeks.” These antisemitic political conspiracies are characterized by what’s known as “secondary antisemitism” where the roles of perpetrator and victimhood are reversed. Prindle Post author Amy Elyse Gordon analyzed how secondary antisemitism was used in the manifesto of the Tree of Life synagogue attacker, saying, “This . . . rhetoric of victimization, including his claims that Jews were committing genocide against ‘his people’ . . . moments before he shoots up a crowd of morning worshipers, is the idea that the real relationships of victimhood are being obscured. This statement reads like a pre-emptive self-absolution for a mass shooting as an act of self-defense.” Political conspiracies and secondary antisemitism certainly motivate attackers, but an underexamined area of influence on alt-right terrorists and their sympathizers may actually lie in the disparate texts reflecting debate and diversity within early Christian tradition.

The Berkeley Center for Religion, Peace, and World Affairs notes that ideas of “traditional Christianity” have heavily influenced the rise of the American alt-right movement, but that “it is important to note that it is almost exclusively an aesthetic phenomenon and not a theological one. Actual Christian theology, in general, is quite hostile ground for the theories of scientific racism . . . and blood and soil ‘volkism’ favored by the alt-right to take root.” The claim of a primarily aesthetic connection between Christianity and the alt-right is to say that Christian symbolism is being exploited to create the appearance of Christendom within alt-right worldviews. For example, the Christian Identity movement—one of seventeen Christian hate groups listed by the Southern Poverty Law Center—is based on the postulate that only European whites are the descendants of the Lost Tribes of Israel. The movement, then, is built on an aesthetic of Judeo-Christian tradition despite the fact that its white supremacist reading of the bible is entirely unfounded. While alt-right terrorism certainly fabricates a Christian aesthetic, how deep are the theological roots of antisemitism on which they base their ideology?

Antisemitism is a complex, vile, and ever-evolving prejudice against the Jewish community. Antisemitism manifests itself in many ways, but one major example stems from the early Christian idea that the Jewish people were responsible for the murder of Jesus. Despite the fact that only Roman authorities had the power to condemn people to death, the canonical gospels depict the Jewish people as demanding the crucifixion Christ. The Gospel of Matthew, even portrays the Jewish crowds as verbally accepting the responsibility for the death of Christ: “When Pilate saw that he was getting nowhere, but that instead an uproar was starting, he took water and washed his hands in front of the crowd. ‘I am innocent of this man’s blood,’ he said. ‘It is your responsibility!’ / All the people answered, ‘His blood is on us and on our children’” (Matthew 27:24-25). This passage was cited verbatim as justification for the attack on the Chabad of Poway synagogue in the shooter’s open letter.

Professor of Hebrew and Judaic studies at New York University, Annette Reed, says that the diabolization of the Jewish people was “just one of a broad continuum of different [rhetorical] strategies by which followers of Jesus made sense of their relation to Judaism.”

Christianity was not made legal in the Roman empire until 313 CE when emperor Constantine issued the edict of Milan—roughly three hundred years after the Crucifixion. Downplaying the role of Roman authorities in the death of Christ would have been advantageous for a religion attempting to gain political and cultural acceptance in Rome. At this time, the Christian tradition was also working through tensions of self-identification and began to define itself as separate from Judaism.

At the heart of the separation between early Jesus followers and Judaism lies an anxiety about Christianity’s responsibility for antisemitism. John Gager, Professor of Religion at Princeton University, writes, “The study of relations between Judaism and early Christianity, perhaps more than any other area of modern scholarship, has felt the impact of WWII and its aftermath. The experience of the Holocaust reintroduced with unprecedented urgency the question of Christianity’s responsibility for anti-Semitism: not simply whether individual Christians had added fuel to modern European anti-Semitism, but whether Christianity itself was, in its essence and from its beginnings, the primary source of anti-Semitism in Western culture.”

Embedded within the very identity of Christianity lies a troubling cause of antisemitism: the idea that Christians have replaced the Jewish people as the people of God. The Epistle to the Hebrews stands as one example of this idea—called supersessionism. The Jewish Annotated New Testament (second edition) says Christianity “understood itself as having replaced not just the covenant between Israel and God, but Judaism as a religion . . . Supersessionist theology inscribes Judaism as an obsolete, illegitimate religion, and in the New Testament this idea is articulated no more plainly than in Hebrews.”  Hebrews argues for the superiority of Christ over Jewish tradition—one point in a complex navigation of Christian-Jewish relations by early Jesus followers. However, the Christian view of Judaism as an invalid religion coupled with a scapegoating of the Jewish people for the Crucifixion of Christ can and has been read to justify egregious acts of violence.

Instead of asking if antisemitism ‘exists’ in the earliest thoughts and writings of Christ-followers, it may be more helpful to ask if the New Testament motivates antisemitic thought—whether it’s ‘there’ or not. Professor Reed points out that glaring anti-Jewish messages in the New Testament existed within a context of  “inner-Christian debate in which there were also others who were stressing instead the Jewishness of both Jesus and authentic forms of Christianity.” These anti-Jewish sentiments should then be understood within the context of the early Christian movement to separate itself from Judaism. Mark Leuchter, a Professor of religion and Judaism at Temple University, says, “Once the New Testament became holy specifically to Christians, the original context for debate was lost,” allowing the New Testament to become “justification for anti-Jewish violence and hatred . . . in ways that many Christians don’t even realize.”

The Chabad of Poway synagogue shooter was a member of the Orthodox Presbyterian Church—an evangelical denomination founded to counter liberalism in mainline Presbyterianism. After reading the Christian theology present in the shooter’s manifesto, Reverend of the church, Mika Edmondson, said, “We can’t pretend as though we didn’t have some responsibility for him — he was radicalized into white nationalism from within the very midst of our church.”

Also in response to reading the shooter’s manifesto, Reverend Duke Kwon of the Presbyterian Church in America says, “you actually hear a frighteningly clear articulation of the Christian theology in certain sentences and paragraphs. He has, in some ways, been well taught in the church.” To address the violent and growing crisis of alt-right, domestic terrorism in the United States, the Christian church must do more than simply condemn such acts. Christians, especially conservative, evangelical denominations whose political ideology engage alt-right views, should recognize that their teachings can and are being conflated with white nationalism. Practicing Christians are quick to defend the Bible in the face of criticism, but in this case there is more at stake than reputation. The connections between alt-right ideology and Christianity go dangerously beyond simple aesthetics. The reason Christian aesthetics are so widely co-opted by proponents of white supremacy is because early Christian scripture and the very identity of the Christian tradition has roots in anti-Jewish sentiment. Those who choose to ignore this reality become complacent in its tragic consequences.