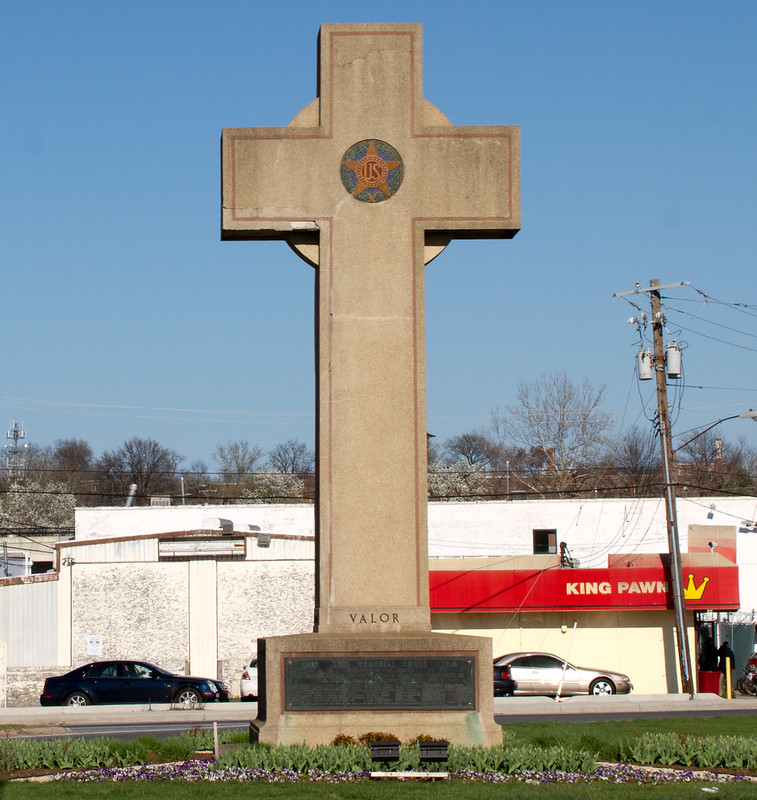 In 1925, a 40-foot stone cross was erected in Bladensburg Maryland. The cross was built by the American Legion and is known as the Bladensburg Cross or, more commonly, the Peace Cross. It was built as a monument to honor the 49 men from Prince George’s County who fought and died in World War I. The design of the monument is a simple white cross, which was a fairly common style in cemeteries at the time of its construction (though some argue that the cross was a central symbol of the war). Construction initially began on public land, but when the project ran out of funding, the American Legion took over and completed construction in a private capacity. In 1961, the state obtained the land through the state’s exercise of its eminent domain power for the purposes of constructing a highway. The memorial now stands on a highway median on state land and is maintained by Maryland-National Capital Park and Planning Commission. In 1985, the commission spent $100,000 in taxpayer money to renovate the monument. At that time, the state conducted a ceremony during which the monument was rededicated to veterans of all wars. In 2008, the legislature set an additional $100,000 for renovation of the deteriorating monument, but the general consensus is that at this stage the monument is beyond repair.

A plaque on the monument expresses commitment to belief in one God.  It reads:

WE, THE CITIZENS OF MARYLAND, TRUSTING IN
GOD, THE SUPREME RULER OF THE UNIVERSE,
PLEDGE FAITH IN OUR BROTHERS WHO GAVE
THEIR ALL IN THE WORLD WAR TO MAKE THE
WORLD SAFE FOR DEMOCRACY. THEIR MORTAL
BODIES HAVE TURNED TO DUST, BUT THEIR SPIRIT
LIVES TO GUIDE US THROUGH LIFE IN THE WAY OF
GODLINESS, JUSTICE, AND LIBERTY.
WITH OUR MOTTO, “ONE GOD, ONE COUNTRY AND
ONE FLAG,” WE CONTRIBUTE TO THIS MEMORIAL
CROSS COMMEMORATING THE MEMORY OF THOSE
WHO HAVE NOT DIED IN VAIN.

Establishment Clause cases are often decided according to familiar precedent. That standard is the Lemon Test, established in the 1971 case Lemon v. Kurtzman. This test has three prongs. First, the statute must have a secular legislative purpose. Second, its principal or primary effect must be one that neither advances nor inhibits religion. Third, the statute must not foster an excessive government entanglement with religion. The Fourth Circuit court concluded that The Bladensburg Cross violated prongs two and three of this test.

The Supreme Court reversed the decision of the Fourth Circuit.  The court declined to use the Lemon Test. Instead, in his opinion, Justice Alito focused on facts about the historical background of the monument, identifying four main reasons that assessing historical monuments is different from assessing monuments that are newly constructed.  First, he claimed that, when monuments are old enough, it is difficult to know the precise intentions behind their construction. Second, he claimed that symbols can take on additional meanings over time. Third, he suggested that the message of a monument may evolve over time, and finally, he said that when a monument has existed for long enough in a community and has become part of the everyday lives of those living in the community, the removal of the memorial may no longer be seen as neutral.

In her dissent, Justice Ruth Bader Ginsberg contested the idea that the cross was a symbol for anything other than Christianity.  She said from the bench, “The Latin cross is the foremost symbol of the Christian faith, embodying the ‘central theological claim of Christianity: that the Son of God died on the cross, that he rose from the dead and that his death and resurrection offer the possibility of eternal life.’ The Latin cross is not emblematic of any other faith.”

The court is somewhat bound by legal precedent, though they can and do reinterpret and even reinvent precedent as they go.  This controversy gives rise not only to legal questions, but, more fundamentally, to moral questions.

The historical features of our community have value. They provide the community with reminders that the lives they live now are made possible by the efforts and struggles of countless others who came before. They provide a sense of shared narrative, community, and even family. They honor the dignity and encourage an attitude of respect for those who have died.

On the other hand, there are many symbols of respect and honor that are not explicitly religious in nature. The claim that the use of religious symbolism by the state is not problematic because the memorial in question was built a sufficiently long time ago strikes many as nothing more than a fallacious appeal to tradition. As Justice Ginsberg points out, there is no confusion in our largely Christian culture when it comes to what a cross stands for. What’s more, the intended message is not inescapably lost to history—it’s carved right onto the monument itself. It reads, in part, “One God, one country, and one flag.” This is simply not the message that should be sent by a country committed to refrain from endorsing any particular religion. We are not a country committed to advancing the idea that there is one God and one God only.

The fact that the memorial was rededicated to veterans from all wars is important.  The state continues to provide funding for a memorial that is dedicated to all veterans, but that, in design, demonstrates respect only to the Christian veterans of war. While Justice Alito is concerned that removing the memorial now would not be a demonstration of neutrality, it is hard to see how the state’s continued taxpayer-funded maintenance of a Christian symbol to honor all veterans of all wars is an act of religious neutrality. The monument is in bad condition, but  perhaps the $100,000 reserved to preserve it would be better spent in the construction of a new memorial with a more inclusive design in a more appropriate location.