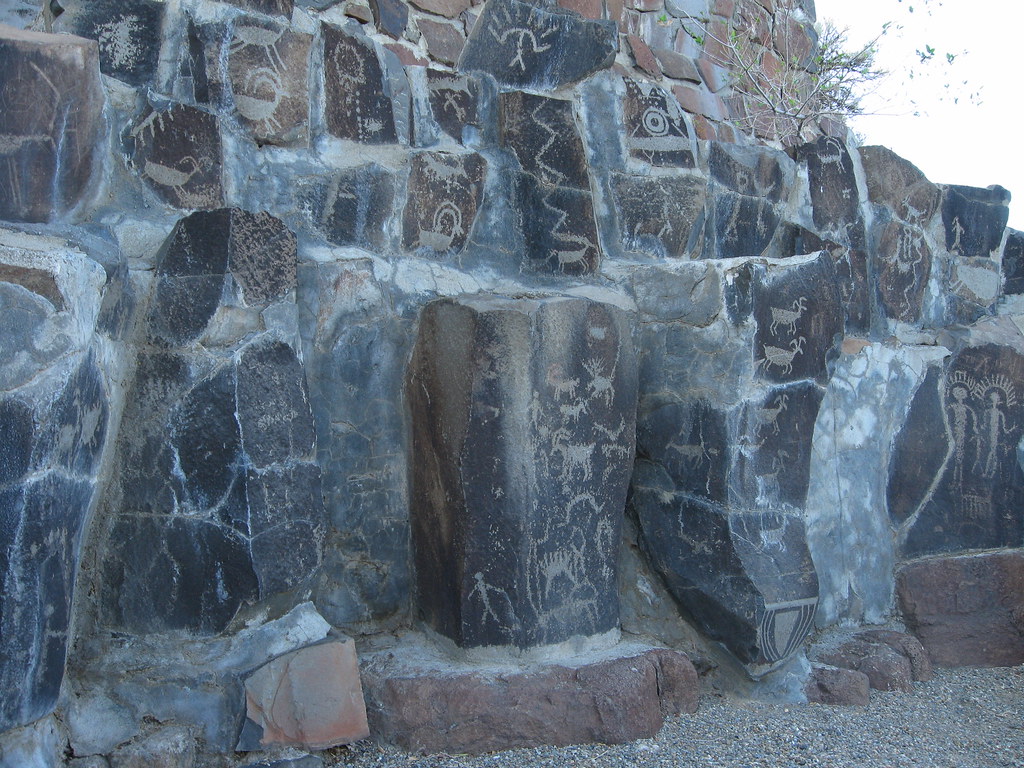 The Australian continent has been continually inhabited for at least 60,000 years. The Aboriginal or First Nations people of Australia are the longest surviving continuous culture(s) in the world, though their traditional lifestyles, languages and connections to country have been severely degraded by European settlement at the end of the Eighteenth Century. The Burrup peninsula, in the north-western corner of Australia, is home to a vast gallery of petroglyphs, or rock carvings, which tell a story of human habitation that stretches back tens of thousands of years, well before the last ice age to the time when Neanderthals still inhabited Europe.

Known as Murujuga in the local Aboriginal language, the site contains more than one million petroglyphs across 36,857ha of the peninsula and surrounding Dampier Archipelago. The petroglyphs of the Murujuga peninsula “have been considered to constitute the largest gallery of such rock art in the world.” The most recent petroglyphs were carved in the 1800s, before the Yaburara People (the artists and traditional inhabitants of the area) were murdered or driven off the land in a period of sustained colonial killings in 1868 known as the Flying Foam massacre.

Among its treasures Murujuga contains pieces of rock art that are some of the oldest known examples of art by prehistoric humans. The oldest of the petroglyphs at this site date back some 40,000 years. Among many things the Murujuga petroglyphs depict, there are pictures of some species of megafauna, such as the giant flat-tailed kangaroo, which became extinct around 30,000 years ago. The Murujuga site is also home to the first known image of a human face in history, carved about 35,000 years ago. The value of these ancient carvings, not only for Australia’s First Nations people, but also for all of humanity, is inestimable.

However the northwest of Australia is also home to massive iron ore, oil, coal, mineral and gas reserves, as well as other heavy industry. Industrial scale mining in areas including the Burrup Peninsula has, from the early twentieth century, contributed to Australia becoming one of the per capita richest developed countries in the world. Thus it comes as no surprise that the preservation of the Murujuga rock art has been subordinated to economic and corporate interests. In the 1960’s development of deep-water ports to transport iron ore was carried out without any survey work, as museum recommendations on preservation following survey work on nearby rock art had hindered other proposed developments. “A great deal of rock art was destroyed on the peninsula in the 1960’s” writes Robert Bednarik, an archaeologist who, since the early 2000’s has been arguing for greater steps to be taken for protection so that the petroglyphs may be saved from further destruction.

These developments, along with those of and around the original town of Dampier, where coastline was bulldozed and filled in, including a major site on which the power-station was erected, has destroyed an estimated 20 to 25 percent of the population of petroglyphs. The Murujuga rock art is now under threat from chemicals associated with mining, and nearby fertilizer plants. The site currently sits adjacent to the largest gas refinery in the Southern Hemisphere.

In 2018 the Western Australian government formally committed to pursuing World Heritage status for the Burrup peninsula and together with traditional Aboriginal native title land owners signed off on an application to have the site listed under the UNESCO world heritage programme.

The importance of gaining world heritage status for the Murujuga rock art is that world heritage status is a strong catalyst for better protection and management. It is also a strong statement of what we value and why. Present in the very idea of world heritage is a sense of reverence for the achievements of human life, civilization and culture through time, and the idea that relics of such achievements from the distant past teach us all something about what the human journey has been. The importance of protecting the Murujuga rock art lies in its value to humanity – as a record not just of human history as something in the past, but as a testament to human creativity.

The Murujuga gallery is a place of enormous anthropological and archaeological importance. But unlike other sites of prehistoric art, such as the ancient cave paintings in Spain and France, it is part of a living cultural tradition. For Australian Aboriginal people, places of special sacred significance, and objects and artifacts produced by ancestors, form part of a living cultural tradition, in which ancestors are ‘present’ – captured in the notion of Dreamtime with its complex understanding of place and time in which myth, narrative, past and present mingle.

But the possibility of a successful application leading to official world heritage listing is dependent on there being a good chance the site can be preserved. This aspect of the application already looks shaky, as the West Australian government is apparently not prepared to make sacrifices to industry, current or future, that would put the interests of the petroglyphs above those of industry.

The WA government is currently pursuing further industrial development alongside the world heritage listing. A briefing note to premier Mark McGowan leaked to the media last year warned that the timing of the latter was “critical” to ensuring industrial development continued. Regulators in Western Australia are considering proposals for two new chemical plants on the Burrup peninsula that would increase air pollution. A Senate report has warned emissions from heavy industry on the peninsula could damage the carvings, prompting rock art experts to call for a halt to new industry approvals until an accurate picture of the damage being done to the petroglyphs can be assessed. Any plans to increase industrial development in the region could damage the rock art and undermine efforts to secure world heritage listing. UNESCO has already indicated that the current level of industry on there may impinge on the possibility of World Heritage listing.

Consider the analogy between the destruction of  Murujuga and the worldwide outrage at the destruction of the Bamiyan Buddhas by the Taliban in 2001 along with the heartbreaking destruction of Palmyra by Isis in 2016. These actions caused a widespread global sense of shock both at the loss of irreplaceable historical and cultural treasures as well as at the barbarity with which they were destroyed. Is it any less barbaric to fail to prevent the slow destruction of the Murujuga petroglyphs, through insidious neglect and capitulation to industry?

The ethical issues are clear here, and clearly connected to the line that can be drawn from the colonial attitudes to and barbaric treatment of Australia’s First Nations people, (exemplified in the governments’ historic disregard for sites of important cultural significance for Aboriginal people) to the corporate colonial interests of resource giants being allowed to continue the destruction of cultural heritage.

Those advocating for the preservation of the Murujuga petroglyphs face a difficult fight to protect these beautiful, delicate and ancient artworks, which reach as far back as human history, from the industrial juggernauts of fossil fuel mining and heavy industry destroying our collective human future.