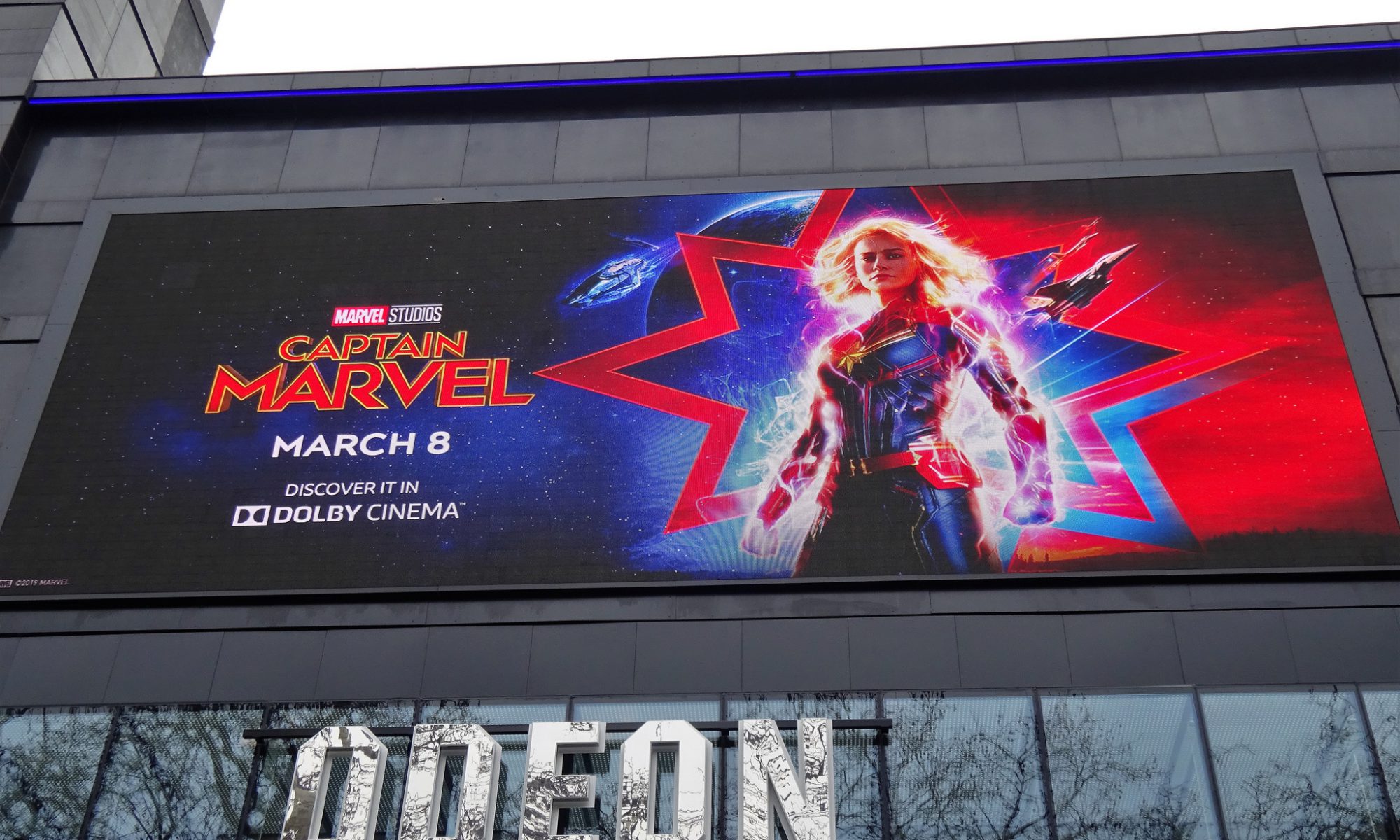 Captain Marvel, Marvel’s newest superhero flick, had a very successful opening weekend at the box office, despite backlash from Internet trolls and diehard comic book fans leading up to the release. Most of the negative responses have been what one might expect for Marvel’s first female-led project; many complained that Brie Larson sported stoic expression in the film’s poster, or that the feminist slant of the promotional material ended up “isolating the audience” (a baffling statement, as though the film was only meant to be viewed by men). Despite these complaints, the film has received overwhelmingly positive responses from female viewers.

This is hardly surprising, as film was clearly marketed as another fissure in the glass ceiling. It’s premiere date was set for International Women’s day, and Brie Larson even went so far as to call the project “the biggest feminist movie of all time.” In interviews, Larson expressed her hope that Captain Marvel will inspire a generation of young girls to pursue careers as pilots, saying, “I really do hope that it inspires girls and women – that if that’s the path that they want to take, that they know that it’s available to them.”

But the film has received negative responses from a more progressive quarter as well. Some critics have called the film military propaganda for the U.S. Air Force, denouncing it as little more than a flashy and expensive recruitment ad targeted at women. This reading has been bolstered by the film’s marketing strategy. Ads for the Air Force played before many screenings of the film, specifically linking the heroic character of Captain Marvel (who is herself a former Air Force pilot) to real members of the armed forces. In one, a female pilot proclaims that “Every superhero has an origin story. We all got our start somewhere. For us, it was the U.S. Air Force.” Real army pilots were included in press tours and other promotional materials, and were also used as extras on set. Dr. Roger Stahl, a professor of communications at the University of Georgia, said of the film in an interview with Los Angeles Magazine, “[The military is] killing a few birds with one stone with Captain Marvel. They’re recruiting, they’re rehabilitating the image of the Air Force, and they’re appealing to an elusive but desirable demographic.”

Modern propaganda is much harder to spot (and therefore much more insidious) than blatantly biased World War II posters and idealized statues of dictators from autocratic nations. It’s also especially damning when used as a label, which is why the army has tried desperately to distance itself from it. Phil Strub, a former navy officer who currently works as a liaison between the DOD (Department of Defense) and Hollywood, often consults on blockbuster films like Captain Marvel. When asked if military-sponsored films should be classified as propaganda in an interview with Outline, he rather defensively said,

“I associate [the word propaganda] with something that is not truthful. Something that is put together deliberately to mislead, to brainwash people, to twist the real. They whip [true and false] together in a smorgasbord. That’s propaganda. And maybe you’d accuse me of being too pro-military but to me, the movies we work with, they’re morale-improvement. We don’t say, ‘OK! Let’s see what we can do to exploit this opportunity!’ We’re not trying to brainwash people! We’re out to present the clearest, truest view.”;

The military’s official stance on Captain Marvel falls pretty closely in line with Strub’s viewpoint. The Air Force has denied that the film is a subversive attempt to boost enlistment, but claims that they worked with the production solely to ensure the military was given as “accurate and authentic” a portrayal as possible.

We should also understand that Captain Marvel isn’t the first big-budget film (or even the first Marvel film) the government has had a hand in. Iron Man, the very first movie in the Marvel cinematic universe, was backed and largely shaped by input from the DOD. The 1986 film Top Gun was also used to rehabilitate the public’s view of the military in the wake of Vietnam, boosting recruitment numbers by a considerable amount. However, almost none of these films have faced backlash to the same degree that Captain Marvel currently is. This might be because the recruitment is specifically targeted at women now, which not only indicates how the demographics of our armed forces are shifting but how much more of the population is being targeted by these efforts and implicated in warfare.

However, it’s pertinent to ask if the actual message of the movie itself conflicts with its purpose. As Elena Levin points out, the Skrulls, an ostensibly villainous race of shape shifters that Captain Marvel is pitted against in the first half of the film, are eventually revealed to be

“a refugee group being hounded across the galaxy by the military of a fascist hegemony […] that denies them their basic dignity […] The movie doesn’t just show the galaxy from the Skrull point of view, it asks viewers to identify with them. Like the Skrull, people conceal themselves in order to survive in an oppressive world. When they defend themselves, the oppressors call it war.”

Captain Marvel eventually joins the Skrulls and protects them from the Kree, the fascist hegemony she was brainwashed by in the beginning of the film.

There are some flaws in the movie’s anti-war message, though. Dr. Lawson, a defector from the Kree, professes that her aim is to end all wars, not win them. And yet Lawson, it seems, can only do this from within the United States military, which she works for as a research scientist after leaving her home planet. Despite this, the film ultimately sympathizes with those disenfranchised by imperialism, and Lawson’s goal (strange as her methods may be) is still portrayed as a pacifist one.

The conflict between message and purpose raises a number of interesting questions. Is it possible for a movie to be military propaganda and also advocate against war, or does the recruitment goal render the anti-war message hollow? Is the goal of the propaganda merely to inspire positive emotions associated with the Air Force (which it certainly does; the colors of Captain Marvel’s uniform are chosen because of their association with the Air Force), so therefore it doesn’t matter if it’s wrapped up in an anti-war package? Furthermore, is it ethical for us to feel empowered by this movie?

On the one hand, something about the film smacks of white feminism, namely in it’s disregard of the horrific experiences women of color from other nations have had with the U.S. military. This goes beyond general statements on the evils of imperialism, which the film certainly offers. Dr. Elizabeth Mesok, a researcher who studies gender in the military, said of the film, “If we’re going to talk about women’s equality and women’s empowerment but we’re going to divorce it from a conversation about the rights of Afghan women and the safety and security and wellbeing Iraqi women or women in Yemen, then that’s not a conversation that I think is politically fulfilling.” It might be compared to what what Sarah Banet-Weiser calls “empowerment feminism,” of the kind of feminism that encourages self-confidence and success under a capitalist system to the detriment of economic or political autonomy, which ultimately reinforces rather than dismantles patriarchal and white supremacist values. In that sense, we might hesitate before surrendering to the emotional high of the film.

On the other hand, the emotions elicited by the film are potent and may be understood separately from the pro-military message. There’s a wonderful moment near the end where Captain Marvel goes up against her former mentor, played by Jude Law, without giving in to the rules he tried to impose on her in the beginning of the film. He encouraged her to be emotionless and fight within the restrictions he provided her with, but she ultimately realizes that she has nothing to prove to him and triumphs over him her own way. It might be pointless to dismiss such genuinely uplifting moments as irredeemably tainted by their association with propaganda, and acknowledge their value for female audiences who may come away with no more interest in the Air Force than they went in with.

Like all films, we have to view this one with a critical eye, and understand both its actual purpose, how it’s meant to influence us unconsciously, and what we might consciously chose to take away from it.