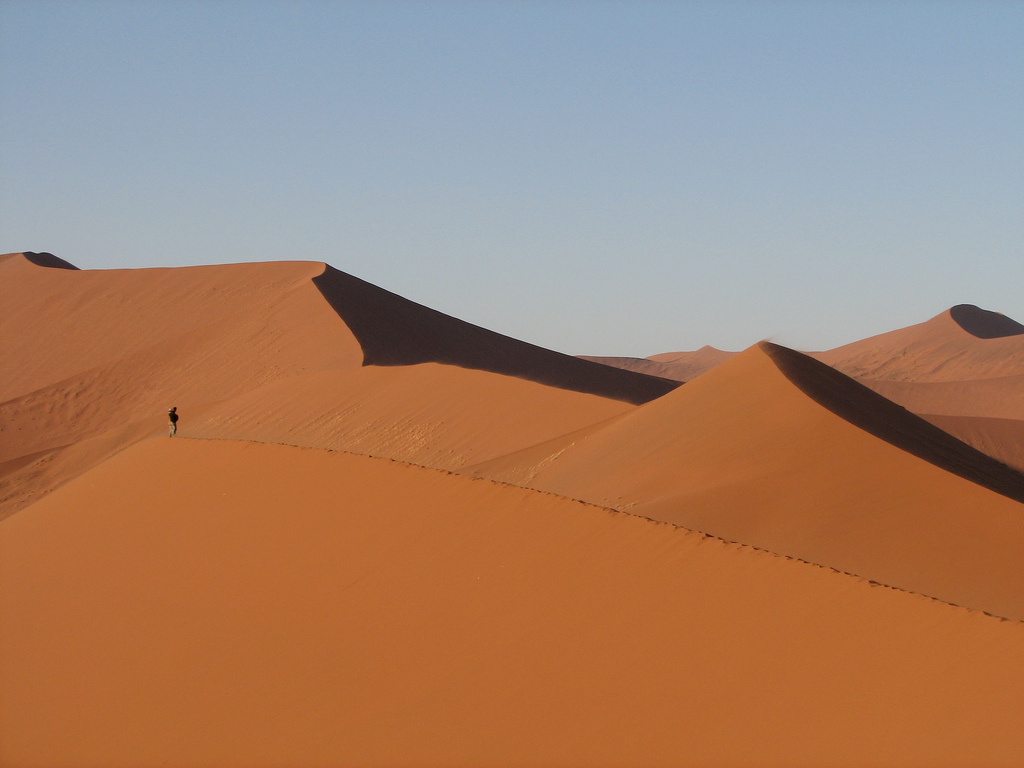 In early 2019, Namibian artist Max Siedentopf revealed his newest sound installation: six solar-powered speakers hidden somewhere in the Namib Desert with an mp3 player programmed to repeatedly play one song – Toto’s quadruple platinum 1982 hit, ‘Africa.’ Dubbing the project ‘Toto Forever,’  the artist explained to the BBC “[I] wanted to pay the song the ultimate homage and physically exhibit ‘Africa’ in Africa…Some [Namibians] love it and some say it’s probably the worst sound installation ever. I think that’s a great compliment.”

With nearly 500 million recorded listenings on Spotify (and over 447 million views on YouTube), Toto’s rock-pop smash hit remains as unusually popular with contemporary fans as it was when first released nearly four decades ago. Dozens of covers circulate online, redone in genres ranging from heavy metal to 8-bit electronica to jazz saxophone, and ‘Africa’ has been featured in television shows like South Park and Stranger Things, tributed by celebrities in home movies, and sampled heavily in Pitbull’s ‘Ocean to Ocean’ from the soundtrack of 2018’s billion-dollar blockbuster film Aquaman.

But what are the ethical implications of consistent sound pollution in an otherwise untouched ecosystem? Should the widespread popularity of ‘Africa’ in America allow the song to pollute Africa itself?

Although it is designed to withstand the harsh climate of Namibia’s coastal desert, Siedentopf admits that the environment will eventually “devour the installation entirely,” leaving the plastic components of the project to decay in the sand – however, long before this sort of waste becomes an issue, the persistent drum beat of the four-and-a-half minute song will inevitably affect the local environment for the worse as it, among other issues, drives away animals, thereby disrupting the natural balance of the ecosystem.

Sometimes called the “forgotten stepchild of the environmental movement,” concern for noise pollution has increased as technological developments over the last century have led to ever-widening varieties of aural litter. Although activists groups like the Noise Abatement Society or the Noise Pollution Clearinghouse are often focused on the consequences for humans who cannot escape the sounds of traffic, phone notifications, emergency sirens, and the like, the broad ecological consequences of modern technology are also an area of real concern. Consider, for example, the NAS’s wind turbines campaign that aims to raise awareness about some unexpected side-effects of this green energy source that often sounds like, in the words of a family living near a wind farm in northwestern England, “a washing machine that’s gone wrong. Its whooshing drumming just goes on and on…it’s an audio version of Chinese Water Torture. The noise is such that it is felt as much as heard.’

While wild areas are often far from quiet themselves, it is not hard to imagine how the introduction of artificial sounds can adversely affect local populations. As Kirsten Parris and Robert McCauley explain, such noise “can affect an animal’s ability to hear or make it difficult for it to find food, locate mates and avoid predators. It can also impair its ability to navigate, communicate, reproduce and participate in normal behaviours.” Although the consequences of such disturbances can take time to present themselves, the ripple effects of food chain disruption can be catastrophic in the long run.

Often, environmental activism depends on something like cost-benefit analyses to determine how much inconvenience should be allowable in return for green initiatives; in the case of ‘Toto Forever,’ a largely conceptual artwork that has already started to fade from the public consciousness, the math does not seem difficult. Not only has whatever popular aesthetic value produced by Siedentopf’s piece already begun to fade, but that value must be weighed against the invasive effects of unnecessary noise on the local ecosystem of “one of world’s oldest and most biologically diverse deserts.” More importantly, this can be a case that draws popular attention more broadly to the ethical issues of noise pollution in general – something that “a hundred men or more” could certainly do something about.