Yertle the Turtle raises questions about justice, political rights, political authority, and the responsibilities a ruler has to their subjects.

Yertle the turtle is the ambitious king of the pond who decides he wants to expand his kingdom. Yertle orders the turtles to stand on each other’s back to form a tall throne, ignoring the complaints of the turtles at the bottom. He then sits atop this throne and proclaims that he rules over all that he sees. Eventually, Mack, the exhausted turtle at the bottom of the stack, burps, and Yertle’s throne and power crumble beneath him.

Dr. Seuss’s Yertle the Turtle raises questions about justice, political rights, political authority, and the responsibilities a ruler has to their subjects. Yertle’s treatment of the turtles, who are hungry and in pain, will seem obviously unfair to the kids, which is a chance to get them to talk about fairness and from there, political rights. Underlying questions are: how important is fairness for a good society? Does every individual have basic rights, and if so, what are they? Kids will likely have strong intuitions in favor of fairness, so one challenge will be soliciting reservations about fairness and then getting the kids to consider them. Here’s an example: it isn’t fair for one soldier to lose their life for the good of the country, but it might not be wrong for the government to send them to battle. Another challenge, if you choose to ask about what being fair means, will be finding disagreements about how to define fairness. A big one is the disagreement between those who say fairness is giving everyone the same things, and those who say fairness is giving everyone the same opportunities. This distinction may be beyond some kids, so pointing it out should be a judgment call.

If you don’t try to proceed by defining fairness, a good alternative is to turn the discussion to fundamental rights. A natural way to do this is by asking: if all the turtles were equally unhappy, hungry, and in pain, would that be a good kingdom? When someone says that all turtles deserve to be free from tyranny like Yertle’s, you can ask the group what other rights turtles or people have, possibly introducing the term right. Each suggested right can lead to more discussion if someone disagrees that the proposal really is a right of all people.

Yertle believes that if he sees something, then he owns it. Though this will likely seem like a silly idea to most kids, it leads to a second set of questions about ownership of property and colonialism. The big ideas raised here include: what does it mean to own something? How can we resolve conflicts in which people disagree about who owns something? Most kids will probably believe that owning something requires more than just being able to see the thing. For example, people own their cars because they bought them, and kids own their Christmas presents because they were given them as gifts. Most kids will probably conclude that, to own something, one must have consensual agreement from the previous owner that they no longer own it. However, two people or two groups of people might both feel that they own something, and resolving this conflict might prove to be a much more difficult issue for kids. Perhaps they’d think that owning something first gives someone the right to it, but kids might also bring up the idea of “finders keepers, losers weepers.” The issue of ownership directly relates to the history of the United States. Did Western Europeans take rightful ownership of the land, or did they take someone else’s property without their consent? Finally, this can lead to controversial and difficult questions about whether it is right to occupy land that was taken by force centuries ago. Do the descendants of settlers really own the land they live on? Introducing this question may require teaching some local history, and it may also be good to ask if any of the students know if they have Native American ancestry.

The third set of questions is about power and authority. The big questions here are: when should people follow the rule of a leader, and when should they not? What characteristics of a leader make him or her one that is worth following? Is disliking a ruler enough to warrant disobeying him? Obviously, there is a risk of getting overly political here. Still, kids might bring up historical examples like Adolf Hitler, which would be a good example of a relatively popular leader who should not be followed. Perhaps kids will bring up the idea that a leader should be moral and unselfish to follow. One of the issues here is that there is likely to be disagreement in society about whether a leader really is moral and unselfish enough to deserve to be followed. This will lead to questions about whether one’s personal opinions about a leader should determine whether or not one follows that leader. For example, usually about half the country doesn’t like the president, but is dislike enough to warrant not obeying? And on a level that is more personally relatable to children, kids can all recall a time when they did not like what a parent or teacher told them to do. Still, kids might disagree about whether disobeying these adults would be a good idea. This may lead to questions about incentives for obeying authority figures.

Mack protests that Yertle’s treatment of the turtles is unfair.

Yertle thinks that if he sees something, he rules over it.

The turtles obey Yertle’s commands despite being afraid and uncomfortable. 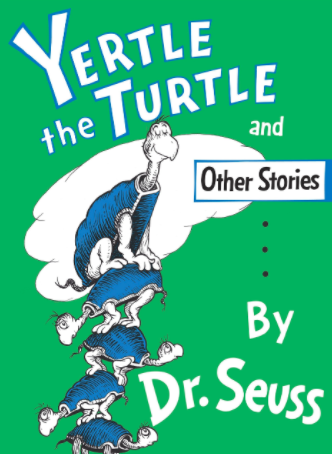