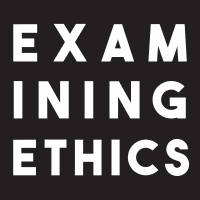 Philosopher Lauren Leydon-Hardy explores the ways that predatory grooming can interfere with the way that a person thinks about themselves and the world.

The views expressed in these episodes reflect the opinions for the individuals who voice them, and do not represent the opinion or institutional position of either The Prindle Institute or DePauw University.

Philosopher Lauren Leydon-Hardy explores the ways that predatory grooming can interfere with the way that a person thinks about themselves and the world.
▶ Listen Now

Ethics in Focus with Elena Ruíz and Nora Berenstain

Today on Examining Ethics, historian of science Lorraine Daston discusses the history of rules and their connection to deep-seated values.
▶ Listen Now

Philosopher Camisha Russell joins us on this episode of Examining Ethics to explore connections between Black Lives Matter and the ethics of reproduction.
▶ Listen Now

We're discussing the ethics of victims' rights with president of the Alliance for Safety and Justice Lenore Anderson.
▶ Listen Now

Pauline Shanks Kaurin, a philosopher and professor of military ethics at the U.S. Naval War College, joins us to explore the ethics of obedience.
▶ Listen Now

On this episode of the Examining Ethics podcast, political theorist Emma Saunders-Hastings explains the effects philanthropy has on democracy.
▶ Listen Now

Care and Institutions with Elizabeth Lanphier

Clinical ethicist and professor of philosophy Elizabeth Lanphier joins the show to discuss the relationship between care and justice, and what an ethic of care might look like in institutional settings.
▶ Listen Now

The philosopher Quill R. Kukla joins the show to discuss the ethics of city living and how people and cities shape each other.
▶ Listen Now

The Science of a Better You with Jim Davies

The cognitive scientist Jim Davies argues that it's possible to figure out how to do the most good for the most people and shares his insights on giving.
▶ Listen Now

Scott Hershovitz joins the show to discuss his work on the questions his kids raise about philosophy and ethics.
▶ Listen Now

On this episode of the Examining Ethics podcast, we explore disability and ethics with Georgetown University scholar Joel Reynolds.
▶ Listen Now

Philosopher Megan Fritts is on the show today to argue that the patterns we may see in the news aren’t actually all that meaningful.
▶ Listen Now

Kyle Fruh and Marcus Hedahl argue that island nations around the world are currently in an unjust war, not with other nations, but with climate change.
▶ Listen Now

Regina Rini joins us today to discuss why we might be disturbed when we learn about the role that psychology plays in our moral decision-making.
▶ Listen Now

The Women Are Up to Something: Benjamin Lipscomb

The philosopher Benjamin Lipscomb joins the show to discuss the unique friendship and work of four women who changed the face of moral philosophy.
▶ Listen Now

Before Jana Mohr Lone was a philosopher, she was a lawyer who worked with children. Now she uses philosophy to empower young people.
▶ Listen Now

On today’s episode of Examining Ethics, the philosopher C. Thi Nguyen explores the relationship of trust we form with the technology we use.
▶ Listen Now

C. Thi Nguyen argues that while transparency might root out public corruption, it also has a sort of chilling effect on the work itself.
▶ Listen Now