When Sophie Gets Angry-Really, Really Angry

Where does anger come from and how do we justify it? How should we deal with anger?

Sophie is playing with a toy gorilla when her sister takes it from her for her turn. Sophie gets angry, really really angry. She is about to blow up, but decides to climb a tree to calm herself.

When Sophie Gets Angry-Really, Really Angry… raises a few interesting questions about the nature of anger. When Sophie gets angry, she looks a certain way and is also ready to “smash the world to smithereens.” Powerful depictions like this raise questions about what anger is, its appearance, and the appropriate course of action in response to anger. This discussion on anger could also lead to a discussion on the expression of anger and political violence based on individual and/or collective anger.

First, this book probes us to question what exactly is anger is. The first impulse that Sophie experiences when she feels angry is the desire to take her anger out on the world. Is anger some form of madness that destroys the ability to think? Some philosophers present the opinion that anger is often accompanied by an impulse to achieve a degree of revenge in an unjustified fashion. In other words, people do not express anger at the right people. The idea of getting angry with the right person implies that the person has done or intended to do something that can incite anger. In return, the angry man expects a certain degree of satisfaction or even pleasure in seeking his revenge. However, Sophie wants to tear the world apart, and she does not aim to avenge her misery from people who angered her, namely her sister and mother. Thus, sometimes anger seeks revenge on the appropriate person, but at other times, it may not.

We also see that Sophie starts crying after she goes through a phase of anger. This brings us to the question of how anger is connected to pain. Most philosophers would agree that anger is often accompanied by pain. However, there may be three different mechanisms in which both of these emotions are externalized. In the first mechanism, anger follows pain. People who are suffering from poverty or sickness and have gone through painful times in life might reach a point of pain where they express anger because they are experiencing pain and suffering alone. This might be the case when citizens might engage in violent demonstrations because others show a certain disregard for their pain or suffering. Another mechanism of expression is when both anger and pain are expressed together. When someone dies, what one expresses is the pain of loss and anger at their circumstances simultaneously. Finally, a third potential mechanism may be when the phase of being hurt comes after the stage when anger is expressed. In this case, a person expresses anger until he has vented it all out; he is left with a much more long-lasting feeling of being hurt by someone. So we can discuss how Sophie expressed her pain and anger together or separately, and if so, in what order. Maybe Sophie adopted the third mechanism. Initially, she was angry for not being allowed to play the Gorilla. Alternatively, maybe she was hurt because her mother scolded her.

Once we identify what impulses are or are not a part of anger, we get to the question, why do people get angry? Some philosophers might say that Sophie had unrealistic expectations about playing with Gorilla. Some might claim that Sophie should not have gotten angry when her sister did take it away for her turn. This view holds that a reasonable person can reason with themselves and will be able to note and deal with unrealistic expectations. In this view, destructive emotions like anger are a result of an error in judgment.

Other philosophers may argue that anger is inescapable and that everyone will get angry sometimes regardless of their morals and intellect. While some people may appear unreasonable in the act of getting angry, other people might be perfectly justified in being angry. However, even people who have a valid reason to be angry might not seem perfectly reasonable in how they express their anger and vice versa. Thus, when Sophie was bursting with the desire to explode with anger, many people might say she is unreasonable for not allowing her sister her fair turn. Nevertheless, when Sophie’s anger did not get her the toy, she tried to calm herself. Does that mean that people can prove to be more reasonable in how they deal with their anger even if they seem to be unreasonable in the act of getting angry?

The Nature of Anger

Oh, is Sophie ever angry now!

She roars a red, red roar.

Then, for a little while she cries…Sophie feels better now.

Original questions and guidelines for philosophical discussion by Zuha Shaikh. Edited June 2020 by The Janet Prindle Institute for Ethics. 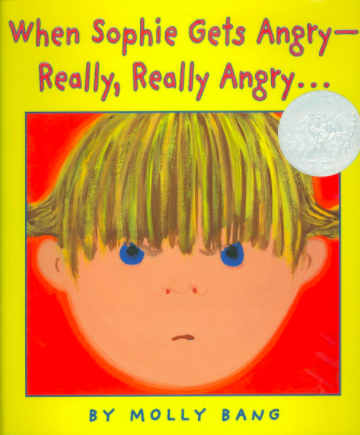