We Are in a Book!

What if you realized one day you were in the pages of a storybook? What would you do if you knew when the book was going to end? In We Are in a Book! by Mo Willems, Gerald and Piggie address the anxiety-inducing topic of death with characteristic zaniness.

In Mo Willem’s We Are in a Book, when Gerald and Piggie realize they are in a storybook, they at first delight in being read and being able to make the reader say funny words, such as “Bananas!” Eventually, however, when Piggie sneaks a peek at the final page of the book, they are thrown into dread. Gerald regrets that he only has so much time to laugh and say, “Bananas!” The main characters help guide children through a classic philosophical quandary: how might we consider death and endings?

Surrounding the problem of death is a more significant question: should we even consider death? Learning that the book ends on page 57 throws Gerald into an anxious terror lasting several pages.

Considering death and mortality may provide someone with a better appreciation for what they can achieve in their lives. However, one should also note that contemplating mortality could ruin one’s desire to achieve, leading them to believe their efforts are pointless in the face of death or an end. Why bother playing at all if you only have 20 minutes for recess?

Some philosophers, such as the Ancient Greek philosopher Epicurus, have tried to rationalize away fears of death. In his Letter to Menoecus, Epicurus stated that “When we are, death is not come, and, when death is come, we are not. It is nothing, then, either to the living or to the dead, for with the living it is not and the dead exist no longer.” In essence, he argues that since we only experience things while living, being dead cannot harm us: we will not be living and will be experiencing nothing, including harm. So, there’s no reason to fear death! Many argue that since non-existence before birth isn’t considered a bad thing, non-existence after death isn’t bad, either. Some, however, counter that because life is a good thing, birth is good for bringing goodness into existence, whereas death is bad for taking goodness out of existence.

There are two prominent views of death: that there is an afterlife and that death is the complete end of existence. These two views connect neatly to the mind-body problem. The mind-body problem arises from the inability to explain how mental processes (such as beliefs, actions, and thinking) are related to physical processes. How do these two things interact and influence one another?

Dualism refers to the view that mental processes are non-physical or immaterial in some way. Dualists believe that the mind and the body are not identical — that the mind or soul or spirit is more than neurons firing neurochemicals to one another. When arguing for the existence of an afterlife, Dualism is especially useful. The body may die, but the mind, distinct in substance, may go elsewhere. Monists, on the other hand, claim that everything is physical. The mind is purely physical, and all of our thoughts, emotions, and dreams are composed entirely of physical reactions.

Another philosophical topic that We Are In a Book! addresses is that of epistemology or the study of how knowledge is accumulated and of what it is comprised. At the beginning of the book, the elephant Gerald boldly postulates that somebody, a reader, is looking at the pair of friends. Piggie then looks out from the page, seeming to confirm this theory.

Assuming Piggie and Gerald cannot actually see the reader, their willingness to accept that someone is out there, even though they can’t see or hear them, makes for good philosophical material. While we typically ignore wild and unprovable “conspiracy theories,” most adults hold views for which they have no sensory evidence. Religious beliefs, such as a belief in God or an afterlife, fall into this category, but so too do beliefs in historical and scientific truths. One cannot see the signing of the Declaration of Independence with their own eyes, nor can the average person see electromagnetic waves. In addition to addressing the age-old problem of death, We Are In a Book! challenges its young readers to question how they know what they know, and why they believe what they believe.

Original questions and guidelines for philosophical discussion by Rinya Kamber and Jack Noble. Edited June 2020 by The Janet Prindle Institute for Ethics. 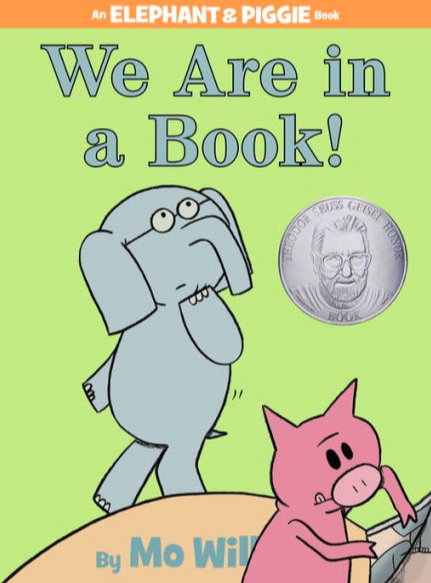