Those Shoes introduces a discussion about generosity, the conflict between altruism and selfishness, and about distributive justice.

Jeremy really wants a pair of black, high-top shoes. His Grandma tells him that they can’t afford the expensive shoes because he needs winter boots. When Jeremy’s old shoes break, his guidance counselor gives him a pair of shoes that everyone makes fun of–except Antonio. Jeremy goes to the thrift stores and finds a pair of those black, high-top shoes, but they are too small. At school, Jeremy notices that Antonio’s shoes are duct taped together at recess. Jeremy eventually decides to give his shoes to Antonio. When it snows, Jeremy remembers that he has new boots.

Toward the end of the story, we see Jeremy is faced with a dilemma–he sees that the only classmate who did not laugh at him when he was basically forced to wear the Velcro shoes a teacher gave to him was also the only other student who did not have the new, all-the-rage shoes. Not only that, but Jeremy notices that Antonio has his shoes falling apart. This introduces the idea of generosity. Jeremy is obviously upset that his feet do not fit into the shoes he wanted so badly, and when he sees the opportunity to give them to Antonio, he had to convince himself and tried to talk himself out of it more than once. Still, he ended up giving the shoes to Antonio. Does this make Jeremy generous? Is it possible to be both jealous/angry at a situation and still be generous in that situation, or do you have to have selfless reasons for what you are doing? There is also an argument to be made about the idea that Jeremy possibly felt like he had to give the shoes to Antonio since they did not fit him and Antonio needed new shoes. If this is true, would that still allow us to say that Jeremy was generous? Some argue that being generous is in the act itself and not in the reasoning behind your decision, while others believe that the reasons behind your actions also play an important role.

Throughout the story, we see more than one instance where Jeremy could have, and arguably should have, been more considerate for the well-being of others. When he wanted the shoes that his grandma could not afford, should he have been more concerned with his grandma being sad about not being able to buy him the shoes that he wants? When Jeremy has an argument with himself about giving the shoes to Antonio, should he have been okay with having nice shoes even though someone else did not? What about the extent to which we help others? Jeremy did end up giving his shoes that he bought with his own money to Antonio since his shoes were falling apart and the new shoes did not fit Jeremy, but was there some sort of obligation to do so?

In the story, most of the class has the same pair of black high top shoes except Jeremy and Antonio. It is important to note that Jeremy and Antonio wanted the shoes, but could not afford them. Is it fair that some people have the nice shoes while their classmates cannot afford them? There are those who would argue that it is fair so long as the people who got the nice shoes did not get them unjustly (did not steal them, lie to get them, etc.). On the other hand, people may argue that everyone should be on the same level (and thus, get equal distribution of all items) so as to reduce the feeling of superiority and account for the x-factor of income that some people (importantly children) cannot control. The larger question here is how should goods be distributed among people? What is our goal for society? Is our goal equality of goods, or equality of opportunity? Or perhaps it is not about equality at all, but rather making sure everyone has enough.

Original questions and guidelines for philosophical discussion by Lindsey Chavez and Mark Leedy. Edited May 2020 by The Janet Prindle Institute for Ethics. 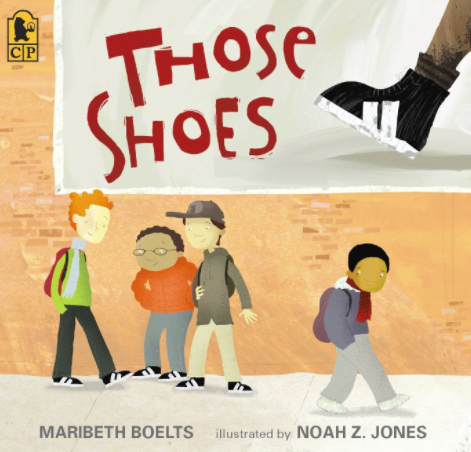