Let’s explore the concepts of pride and compromise with the Zax!

One day in the Prairie of Pax a North-Going Zax and a South-Going Zax run into each other. Both are trying to get to their desired locations, but neither will move out of the way to let the other one pass. While both stand facing each other–too proud to compromise–they fail to see that the world continues on moving, and time passes by.

Read aloud video by A Simple Life with Amanda

Pride is actually a very interesting term in the English language as it possesses both positive and negative connotations. We can think of pride in a positive sense, in the case that one is content and reasonably happy with what they have accomplished, and we can think of pride in a negative sense as being haughty, rude, and arrogant about one’s personal accomplishments. The story of The Zax raises questions as to whether pride is a beneficial or detrimental quality to possess and whether one should compromise with another individual.

There are two distinct philosophical views of pride: the Judeo-Christian view and Aristotle’s view. In the Judeo-Christian view, pride can be defined as a haughty attitude shown by people who believe, often unjustifiably, that they are better than others. This type of pride, also defined by Greek philosophers as hubris, is considered the most serious of the seven deadly sins. This is possibly because the gospel message is built on the concept of humility and sacrifice of one’s own life for the benefit of others. In Proverbs, a book found in the Old Testament of the Bible, we read that: “Pride goes before destruction, a haughty spirit before a fall” (Proverbs 16:18). Although we do not see any physical destruction of the Zax as a result of their inability to overcome their pride, they lose time and fail to progress as the rest of the world continues to, which is arguably even worse than physical destruction.

Aristotle claims that pride can be defined differently, as “the correct level of respect for the importance and value of your personal character, life, efforts, or achievements.” This is the type of pride that Aristotle considers not just a virtue, but rather “the crown of the virtues.” He feels it is necessary and noble for an individual to have pride since it means that they consider themselves worthy of great things, but not more than what they deserve. It is good to have pride and for one to have confidence and be satisfied in what they feel they can accomplish. This type of pride gives individuals the ability to behave autonomously within society. Autonomy is very important since it provides individual freedom; autonomous individuals can choose their own moral code, their personal career path, and who they wish to marry, etc. From this point of view, one may argue that, in refusing to let the other pass by the Zax are simply both standing for their personal values and maintaining the autonomy they deserve.

Neither the South-going Zax nor the North-going Zax are willing to move from their designated path to accommodate the other. Their failure to do so–arguably due to the type of pride they each possess–prevents them from making progress and arriving at their desired locations. One may argue that they should have compromised, and had either simply taken a step to their right or left, they would not remain standing in the same location while years pass and progress by other individuals was made. This is very true; their inability to see the advancement that could be made in the future had they compromised debatably cost them a lot of time. One may contend, though, that had either Zax moved out of the way for the other, they would have lost their individual autonomy. This is also true; philosopher Immanuel Kant argues that if one loses their autonomy that they may be thought of as a means to an end rather than an end in and of themselves, and thus, their independent decisions will no longer respected. Therefore, in the case of the Zax, one must determine the opportunity cost of the situation and thereby decide whether the Zax should compromise so that progress can be made, or whether neither should compromise because their individual autonomy is more important.

The Zax asks us to confront the concepts of pride and compromise. We must determine whether pride is a positive or negative quality to have and whether the Zax should have comprised in order for progress to be made at the risk of sacrificing their autonomy.

“Then the North-Going Zax puffed his chest up with pride. ‘I never,’ he said, ‘take a step to one side’”

Original questions and guidelines for philosophical discussion by Sarah A. Keating. Edited June 2020 by The Janet Prindle Institute for Ethics. 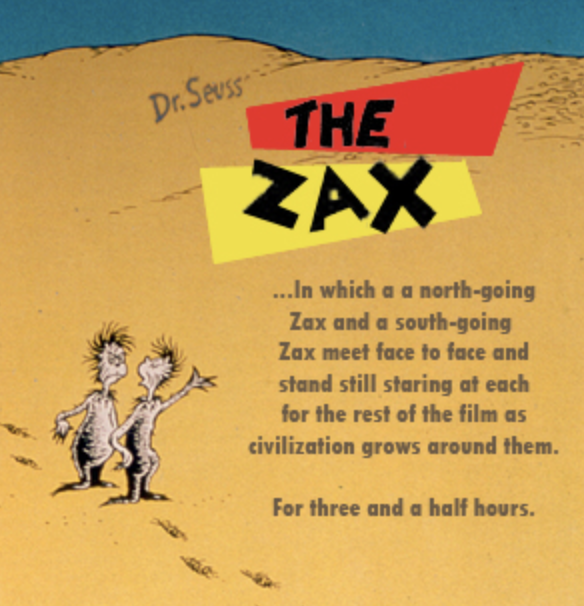