The Trouble with Cauliflower

The Trouble with Cauliflower explores the ideas of luck, superstition, and expectations.

Mortimer is convinced that cauliflower causes bad luck. When he eats a stew with cauliflower in it anyway, he does in fact have bad luck the next day. Yet, when he eats his friend’s “vegetable surprise” casserole, without knowing it contains cauliflower, he has a wonderful time at the fair. This story explores the ideas of luck, superstition, and expectations.

Throughout the first portion of The Trouble with Cauliflower, Mortimer’s statement that “whenever I eat cauliflower, I have bad luck the next day” seems to play out as Mortimer expects it to. The day after he eats cauliflower stew he has a day where everything goes wrong. He stubs his toe, spills his juice, and fails his driving test, amongst other mishaps. Yet, when Mortimer unknowingly eats cauliflower, the following day is a good one; he has a fun time at the fair and wins a free pizza. This portrayal of luck as something that is created by expectations leads into an interesting philosophical topic: What is luck? Does it exist, or is it an excuse for things that do not go the way we hope they will? If luck exists, where does that leave our free will?

A “belief” in luck is mixed into everyday practice and parlance. We use the phrase “good luck” to wish someone well, people discuss rabbit’s feet, or shamrocks, or lucky pennies, or have lucky items of clothing, or other objects. While many, perhaps most, people would say that they “don’t believe in luck,” we do use luck to explain situations and events that don’t have another clear cause. This is especially true when we judge a situation as being caused by “bad luck.” It gives a moral loophole for situations that are somehow outside of the actor’s control.

For example, two individuals (we’ll call them Anna and Bobby) were each driving down the road following every traffic rule to the letter. Anna carefully navigates a sharp turn with no mishap, but just as Bobby comes around the same turn a dog runs out in front of his car and is killed. The “bad luck” position would argue that because each of them were driving at the same speed and following every traffic rule, Bobby cannot be held morally responsible for the death of the dog because it was “bad luck;” that is, caused by something outside of Bobby’s control. While the death of the dog was unfortunate, it was not really Bobby’s fault. The opposite position would hold that Bobby’s action was morally wrong because he hit and killed the dog despite the fact that it was outside of his control.

Some things in the world are outside of our control, and this leads to moral uncertainty. Everyone can agree that it is wrong to kill a dog, but if that dog runs in front of your car while you are driving, are you less blameworthy for its death? Luck can be an explanation to help us retain our belief in moral truth in a world of ambiguous situations.

Along with the overall concept of luck, its existence and usefulness in society, The Trouble with Cauliflower looks at how our expectations shape our experiences. Mortimer expects to have bad luck, which makes him overly nervous for his driver’s test, making him unable to drive well enough to pass. This result can be explained as cause and effect. On the other hand, Mortimer also spills juice and stubs his toe, both things that do not have a clear cause. These seem to be simply “bad luck.” Yet, when Mortimer unwittingly eats cauliflower, and therefore is not expecting bad luck, not even these small misfortunes befall him. If luck is real, how can anyone be held responsible for his or her actions; yet, if it is not, how can seemingly random misfortune be explained? These questions are the basis of a philosophical discussion which is interesting to encourage children to explore.

“It’s just that whenever I eat cauliflower, I have bad luck the next day.”

“Cauliflower is bad luck! I never should have eaten that stew.”

Mortimer did not pass the [driving] test… “I will never eat cauliflower again!” Mortimer moaned.

Original questions and guidelines for philosophical discussion by Elizabeth King. Edited May 2020 by The Janet Prindle Institute for Ethics. 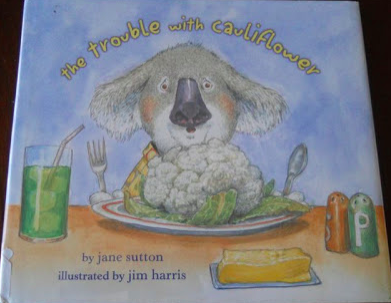