It Could Always Be Worse

It Could Always Be Worse introduces relativism, arguing that our interpretation of experiences matters more than the experiences themselves.

When a poor unfortunate man can take the pains of his cramped, noisy, impoverished existence no longer, he seeks the advice of his rabbi, who tells the man to do some very strange things. Will the rabbi’s advice actually work? Will the poor unfortunate man ever get a decent night’s rest again?

It Could Always Be Worse provides a sweet reminder that things are not always as bad as they seem. Life is hard for the poor family in the story and the father can take the loud, distracting, and cramped quarters of his shack no longer. So what does a clever rabbi do to show the man that things are really not so bad? He tells the father to do things that will make the situation worse! Philosophically speaking, an interesting theme that emerges in the story comes with the realization that while the life conditions are the same for the old man at the beginning of the story as they are at the end, something else has changed. It must have, for at the beginning of the story, the man is overwhelmed with frustration at his inability to get a decent night’s sleep, and at the end, he is sleeping soundly. So what changed? It would seem that the old man’s perspective changed. It wasn’t that his conditions were less cramped or less difficult since in the end, his home is exactly like it was at the beginning. To cause this change in perspective, the wise old rabbi tells the old man to bring all of his animals into the hut with him and his family. Of course, additional problems abound as the situation inside the cramped hut reaches a fever pitch. Only when things reach this boiling point, does the rabbi tell the man to let all the animals out of the hut and back into the yard.

But if the situation in the farmer’s house is externally exactly the same at the end as the beginning, and all that has changed is that the man has realized how much worse it could be, why then is this enough to change the climate of the house? How exactly does a change in perspective do this, and more importantly, what does it tell us about the world? Ultimately, it might be that one’s perspective of a situation can dramatically change how one feels about the situation they are in; that even if we cannot change the external conditions of an unpleasant situation, we can actually change the situation by changing our perspectives. The interesting thing, again, is that nothing in the external world of the man’s life has changed. What has changed is something inside of himself. When he goes to the rabbi initially, he desires advice about how to change his external surroundings so that he can be at peace. But the rabbi instead, by showing him how much worse things could be, gets the man to change something inside himself. This seems to suggest that our perspective has a lot of power in shaping how we experience things. In short, we do not seem to be passive recipients of the world we encounter, even when we find ourselves with very little control over that external world. If perspectives have this kind of influence, then one might suggest that our experience of the world comes partly from the information we receive from the world, and partly from within ourselves as subjects of those experiences. In short, the suggestion in the story seems to be that we add just as much to our experiences from within as outside forces do. Of course, this is a historically debated point. Two philosophically inclined psychologists Gibson and Gregory engaged in just such a debate. On the one hand, Gibson believed that our experience of the world comes just from what we receive from the world, and that’s it. Gregory, on the other hand, believed that our own perspectives added something to our experiences that may not have actually been out there in the world. Bringing this back to the story, if it was really the case that our experience of the world comes solely from the world itself, then the old man should have been just as miserable at the end of the story as he was at the beginning. But he was not. Thus, it seems that if the story’s message is correct, even when everything seems bad, we just need to reflect on all the ways it could be worse, and we can change our perspective, which will in turn concretely change our experience of the world.

The man goes to the Rabbi for advice at the beginning of the story.

The family appreciates the calm and quiet at the end of the story.

Original questions and guidelines for philosophical discussion by Elena Betts and Jayme Johnson. Edited June 2020 by The Janet Prindle Institute for Ethics. 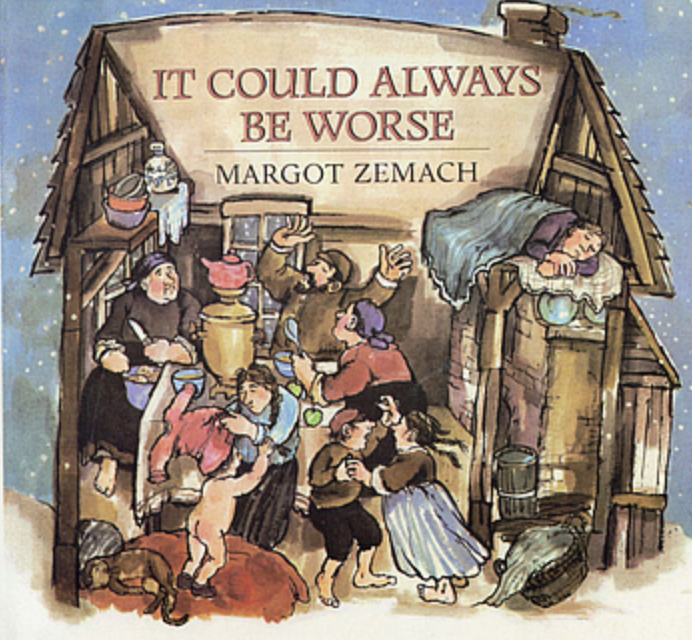 Some of the books on this site may contain characterizations or illustrations that are culturally insensitive or inaccurate. We encourage educators to visit the Association for Library Service to Children’s excellent resource guide for talking to children about issues of race and culture in literature. They also have a guide for navigating tough conversations.