A young boy has decided to squish an ant and can think of many reasons why he should. But the ant has his own reasons for why he shouldn’t. The boy has to make a decision: to squish or not to squish?

Hey, Little Ant, by Phillip and Hannah Hoose, raises some interesting issues about the role of respect in ethics. One broad important question raised by the book is: what makes something or someone worthy of respect? In the story, a young boy wants to squish an ant. The ant, on the other hand, does not want to be squished. The ant argues that ants are indeed creatures that should be respected and not squished. This raises the issue of the proper treatment of animals. Are some animals morally worth less than humans? Are humans and animals equally worthy of respect? Should all beings be treated the same? Do all creatures have certain indisputable rights?

Some philosophers put forth the idea that in order to be worthy of respect one must have the capacity to be rational. They argue that since humans are rational, humans deserve moral respect. Other philosophers argue that holding rationality as the fundamental criteria for respect does not explain why mentally incapacitated humans deserve moral respect. And so some different criterion is correct.

Some philosophers argue that sentience is a better criterion for respect since it guarantees that non-rational humans and rational humans are equally morally important. A sentient being can experience pleasure and pain, so if animals are also sentient then they deserve moral respect. But what kind of treatment is respectful of animals’ status? What kind of behavior towards an animal is morally acceptable? For example, is it morally okay to eat a cow? Or, can you squish an ant? Some philosophers draw distinctions between humans and animals to try to determine what rights, if any, belong to each. If humans have the right not to be gratuitously harmed, do animals have that right too? Is this a moral right that all animals have or just some animals? People treat different kinds of animals differently. Many people would be appalled at the notion of torturing a puppy, but are fine with killing a cow. Where does an ant fit in?

In Hey, Little Ant, the boy observes that ants are unlike humans. He reasons: humans are big and ants are small, humans have feelings and ants do not, and humans have meaningful relationships while ants do not. Discussing Hey, Little Ant provides an opportunity for children to consider the claims made by the boy and the ant. Children can consider whether or not their points are right, and whether or not their points are good reasons to squish or not squish the ant. A good way to begin discussing these issues would be to list the reasons that the boy gives for squishing the ant, list the reasons that the ant gives for not being squished, and list any other reasons the children can think of for either squishing or not squishing the ant that the book does not mention. Then you can ask whether or not these reasons are true and whether or not they are good reasons.

The book raises other interesting ethical issues as well. Is it okay to do something just because you can? The boy obviously has the power to squish the ant, but does that mean he should? What is the relationship between power and responsibility? Another topic raised by the book is peer pressure. If all your friends say you should do something, does that mean you should do it? Does their opinion matter? How much should it matter?

The boy looks down at the ant and calls him “a speck.”

The boy and the ant offer reasons why they are either different or similar.

The boy has the power to squish the ant if he wants.

The boy’s friends pressure him to squish the ant. 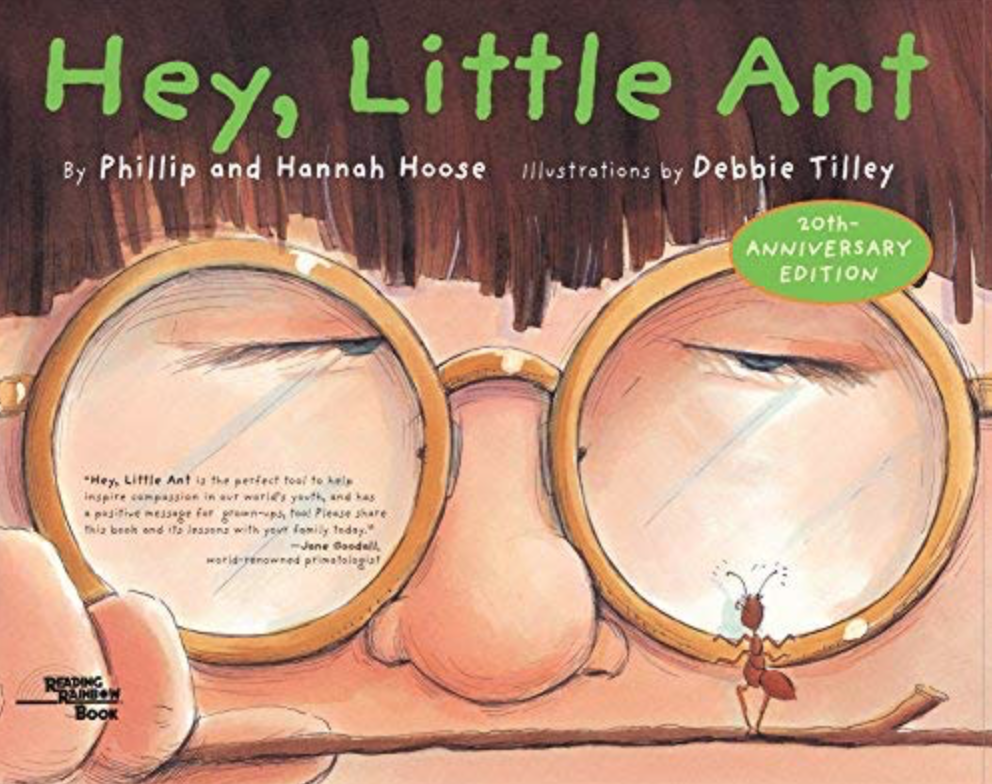