Harold and the Purple Crayon

Harold and the Purple Crayon examines a number of difficult questions about the nature of reality.

Harold thinks it over for some time and decides to go for a walk in the moonlight. This may seem unremarkable, but it is not. There is no moon. There is nothing to walk on. There is nowhere to go. The only things that are real are Harold and the purple crayon.

The overarching theme of Harold and the Purple Crayon is deciphering reality. As a rather ambiguous idea, the discussion of “reality” will throw the children into a fun and active topsy-turvy discussion of what it means to be real, and how one gives objects the power of reality. In a world represented by a blank page, Harold is free to draw his surroundings with his big purple crayon. Is Harold playing make-believe? Is that different from what is real? The questions in this set revolve around the children’s perception of reality. Harold interacts with his drawings in a very “real” way.

The first question in this set addresses a secondary character that follows Harold throughout the story: the moon. The idea of the moon as a constant in the night sky is one children tend to agree with. What complicates this situation, however, is the fact that when the moon is absent in Harold’s world, he draws it with his purple crayon above him in the “sky”. This is left the children to question the validity or reality of Harold’s world. If Harold can draw a moon in the sky, it seems that he could not possibly be existing in the “real” world. And furthermore, he must simply be pretending because, as the children may point out, no one could draw a “real” moon in the sky. Or could they? What makes the moon we observe any more “real” than Harold’s moon? This line of questioning leads the children to discuss the relationship between perception and reality. Must things be experiential in order to be real? Or can they exist simply in our minds? In philosophical study, this may seem similar to the debate of the empiricists versus the rationalists. Rationalists like Descartes tended to believe that the reality of objects was in our ability to rationally understand them. At the same time, empiricists like Locke felt that the interaction with objects in a physical way gave them a sense of universal reality. Obviously, the children will not be familiar with this philosophical distinction, but through the debate and discussion over the reality of Harold’s objects, they can come to know the issues involved.

The second and third question sets revolve around Harold’s experience. As the questions in the second set indicate, Harold seems to be in danger during part of the story; he may even be afraid of the objects he draws. For some of the students, this may indicate a level of reality that is not at first apparent. To have feelings, either sensory or emotional, about an object indicates that the object holds some form of power over its observer. This power is translated to designate a level of “reality” as compared to the surrounding world. Then the task is outlining the differences or definitions that make something real. These qualities in Harold’s drawings further blur the line between what is presumably the “real” world outside of the story. When Harold falls from the hill that he climbs, and when he stumbles into the ocean, he has drawn, it seems as though his life is seriously in danger. This fear is a form of power Harold has passively given to his drawings.

On the other hand, one may question if that gives the ocean or the rock the physical reality to harm Harold. Physical reality and the scientific properties therein sometimes indicate a kind of absolute reality that is independent of Harold. The children can then begin to explore the idea how we know whether objects continue to exist when no one is there to observe them. The physical properties, such as atoms and molecules seem to give objects a sense of absolute reality. However, the majority of people will never see a tree at a purely molecular level; they will see a tree as brown bark and green leaves, using subjective measurements that exist within each individual. The students will then be able to draw their own connections about whether believing in something or fearing it gives it reality for the observer and consequently an absolute reality independent of the observer.

In the third question set, the conclusions from the second set can be reevaluated. Although the emotions or physical danger that Harold may experience as “real”, where do they exist? In this stage, the children can begin to question the idea that Harold could be dreaming this entire purple-crayon-created world. If Harold is dreaming all of this, it seems easier to swallow: we as an audience can attribute these “fantasies” to something we know and also experience. However, the next step in the debate is a discussion of the reality of dreams. Are dreams “real” in the way we have previously defined the term (see question set 1)? The students may then choose to reevaluate their definition of “real”.

In the fourth question set, we begin to discuss the idea of Harold as a character in these drawings. If these are Harold’s drawings and they belong to him, could accidents happen within them? In this way the students will continue to discuss and stretch the reality of Harold’s world. The role of ownership is undefined in the story and in the lives of the children themselves. Do people have control over the events that occur in their lives, are they purely accidental, or can they be attributed to another force? The students can describe Harold’s accidents and relate them to their own in a connection that will help them to understand the concept universally.

The fifth question set explores how Harold also is subject to being lost in his own drawing, lost in the world he created. He travels on a long and perilous journey to find his bedroom window, and when he finally does, the audience is left to wonder whether he even needed to walk through the cities of windows to find his own at all. If this crayon gives Harold the power to create his bedroom anywhere, then it is strange that he is so intent on searching for his “real” window. Being so submerged in his own creations might give Harold an ultimate sense of power and reality, but at this point of the story, as Harold frantically searches for his window, he fears that he cannot escape the world he has created. This leads the students to question the world “outside” of Harold’s world. They can compare themselves with Harold and thus apply his story to their own existence.

The final question set asks the children to address an event common to their own lives and understand the role of reality in it. All the children are likely to relate to Harold’s nine-pie picnic, in that they have enjoyed pretending to have a picnic with pretend food. However, in the illustration and description of the book, it is obvious that Harold is drawing the pies in one moment and then has supposedly eaten them in another. This picnic is reminiscent of a make-believe tea party that you throw for you and your stuffed animals to enjoy. In this case, it is a hungry moose and a deserving porcupine that interacts with Harold. For the children who may have previously defined Harold as un-realistic, this is an example intended to make them define their positions. What is going on in this story? Is it make-believe, a dream, reality, or something else? Encouraging the students to back up their beliefs with reasons and evidence will help them to formulate and understand this debate-style dialogue.

And he set off on his walk, taking his big purple crayon with him. We know that Harold wants to go on a journey under the moonlight, but when he does not see the moon shining, he uses his purple crayon to draw a moon in the sky.

When Harold falls into the “ocean” that he draws, do you think his life is in danger? Do you think he could drown?

The boat seems to save Harold from drowning. Do you think that what is happening to Harold is real?

When Harold steps over the edge of the mountain, he begins to fall through the air. Do you think that it was an accident?

If Harold is drawing his own world, why does it take him so long to find his window?

Harold draws himself a picnic with nine different pies.

Original questions and guidelines for philosophical discussion by Claire Bartholome. Edited June 2020 by The Janet Prindle Institute for Ethics. 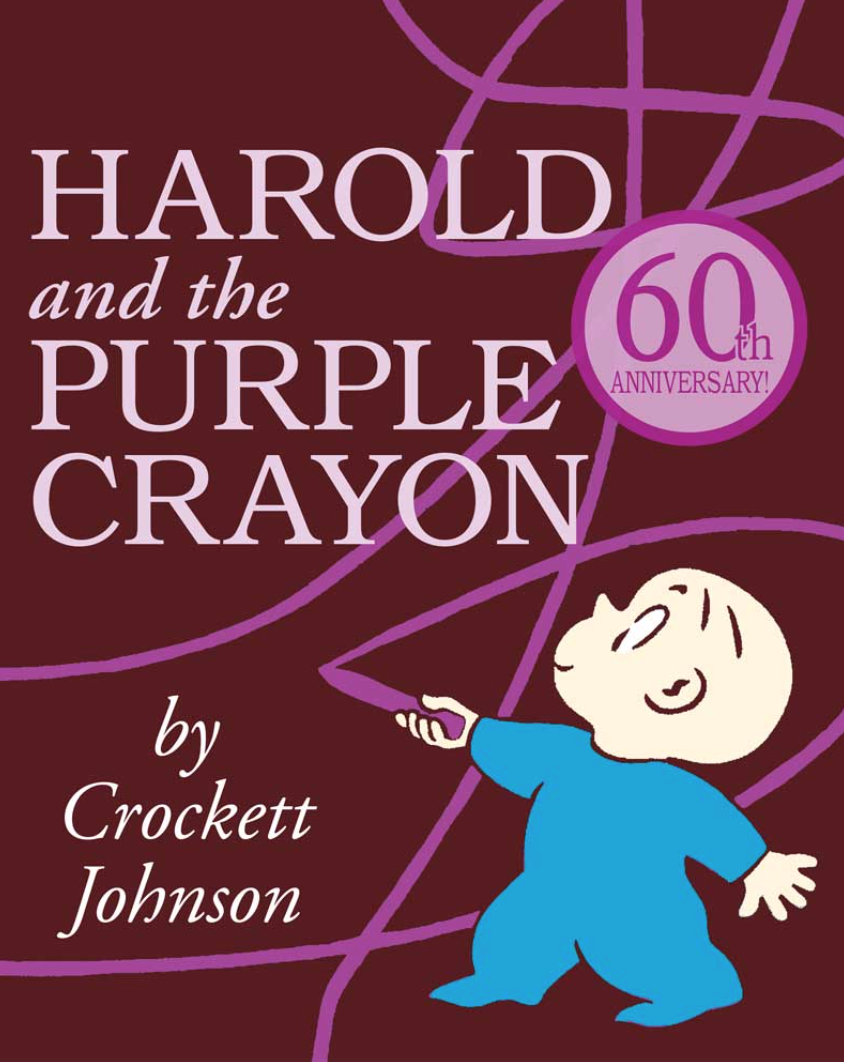