A pigeon’s bus-driving aspirations help us to explore the responsibility to keep promises, persuasion, and the value of punishment.

In Don’t Let the Pigeon Drive the Bus, a bus driver begins the story by expressing to readers the importance of not letting the pigeon drive the bus while he is gone. However, the persuasive pigeon spends the entirety of the book trying to talk us into letting him drive the bus.

Mo Willems’ Don’t Let the Pigeon Drive the Bus raises numerous philosophical issues, ranging from moral responsibility and blame, persuasion, and even punishment. One key option that readers of the story have is whether or not to encourage the kids to respond to the pigeon as he demands permission to drive the bus. The kids will probably enjoy responding “No!” to the pigeon’s endless stream of questions and comments, such as “I tell you what: I’ll just steer” and “I bet your mom would let me.” (Note: Of course, allowing the kids to respond could increase distractions and time spent on reading, if they keep chattering on after yelling back at the pigeon. But putting them in the position of saying no is a great way to set up later questions like, “why did you say no when the pigeon said such-and-such?”)

The pigeon is quite similar to an immature child. The children in class, get to play the role that their parents usually play: being responsible for ensuring that the pigeon does not do anything stupid. The first set of questions addresses moral responsibility and responsibility for others. Central questions in this section include: if we let the pigeon drive the bus, are we morally responsible for any negative result? If the pigeon does not crash, are we as morally culpable as we would be if it does crash? How important is it to consider the effects of our actions on other people? When do we and don’t we have a good reason to blame someone? Kids will possibly disagree on whether or not the pigeon should be blamed for wanting to drive the bus, but they may be able to draw from their own experiences that the answer is no. After all, should parents blame their kids for their desire to watch television? Probably not. Should parents blame their kids for wanting to drive their car? Probably not. It’s probable that most kids will tend to blame whoever allowed the pigeon to drive. The person who let the pigeon drive is smarter and wiser than the pigeon after all, and they were also the one who was told what to do by the bus driver. Without much difficulty, you could lead them into a discussion about who deserves the blame in various situations. Kids will probably conclude that the person who deserves the most blame for something bad is the person who has the knowledge and ability to prevent it from happening. Alternatively, you could steer them towards questions of responsibility. These would try to get at what it is to be responsible over someone (a kid or a pigeon). Why are we at fault if the pigeon drives? What if the bus driver hadn’t said anything to us?

Another big topic raised in the book is the issue of persuasion. The pigeon tries to convince readers to let him drive the bus by using a ton of tactics: making compromises (“I’ll just steer”), making promises (“I’ll be careful”), acting sad (“I never get to do anything”), suggesting games (“Let’s play drive the bus”), getting angry (“LET ME DRIVE THE BUS”), and even making bribes (“I’ll give you five bucks”). The central questions in this section are: to what degree should we resist against being convinced to do something or to believe something? Should a person’s method of convincing matter? Kids will immediately conclude that the pigeon’s efforts of persuasion should not be met with approval. The kids will be able to draw upon their own lives to think of times when being convinced is a good thing and bad. It’s a good thing to be convinced by your parent to wear your seat belt and a bad thing to be convinced by your friend to punch someone.

Additionally, kids will likely conclude that it is better to believe people who have previously established themselves as trustworthy, although other, more deep philosophical issues could come up here. For example, there is the issue of whether the person making an argument should matter or whether the argument should stand or fall on its own merits: you could ask, what the difference might be if it was your teacher telling you to let the pigeon drive the bus rather than the pigeon itself. However, what if you still knew it wasn’t safe? What if your mother told you so? This section may prompt children to think about rationality. They may recognize that, to be convinced of something, evidence and/or good reasons should be required. Your mom can give you good reasons to make sure to eat lunch every day, which is why it’s good to be convinced that eating lunch every day is a good thing. A question to prompt this could be: what could the pigeon do to convince us it’s safe to let him drive? You might hear: show us his driver’s license, provide evidence of past driving, and so on. Then, there are good follow-up questions, like, when do you need evidence to believe someone?

The final section addresses punishment, and relates to a hypothetical question raised by the book: what if the pigeon had been allowed to drive the bus? How should we address the pigeon’s wrongdoing? What is the purpose of punishing people? There are a few methods of punishment that result in different outcomes, and this conversation might guide kids to understand the differences between retributive punishment, rehabilitating punishment, or punishment that protects society from a person’s wrongdoing. After asking about what punishment the pigeon deserves, you could start with: do your parents punish you? Why? When they respond “Because I did X, which was bad,” ask, “Did you deserve punishment for that?”, “Did it make you less likely to do it again?” and so on. Another tack could be: suppose the pigeon drove the bus and we had to punish him. Why would you punish him — because it was bad or so that he wouldn’t do it again? Another compelling question for the kids could be: suppose you did something small and were sent to your room all day without meals! What’s wrong with that? From their indignation, you could try to draw responses like “the punishment was too harsh,” and get them talking about the right way to fit the punishment to the crime. Finally, to get at rehabilitation, you can ask: if we punish the pigeon and he drives another bus, was there any point to the punishment? What’s a time you learned a lesson from a punishment? Are you grateful for that? All told, the ideal result of this philosophical discussion would be the recognition that punishment is given to people for a variety of reasons, and that protecting society, rehabilitating the criminal, and retribution are all, on some level, valid things to consider when doling out punishment.

The pigeon wants to drive the bus, but we aren’t supposed to let him.

The pigeon tries many different ways to convince us to let him drive.

Original questions and guidelines for philosophical discussion by Teddy Willard and Soren Schlassa. Edited June 2020 by The Janet Prindle Institute for Ethics. 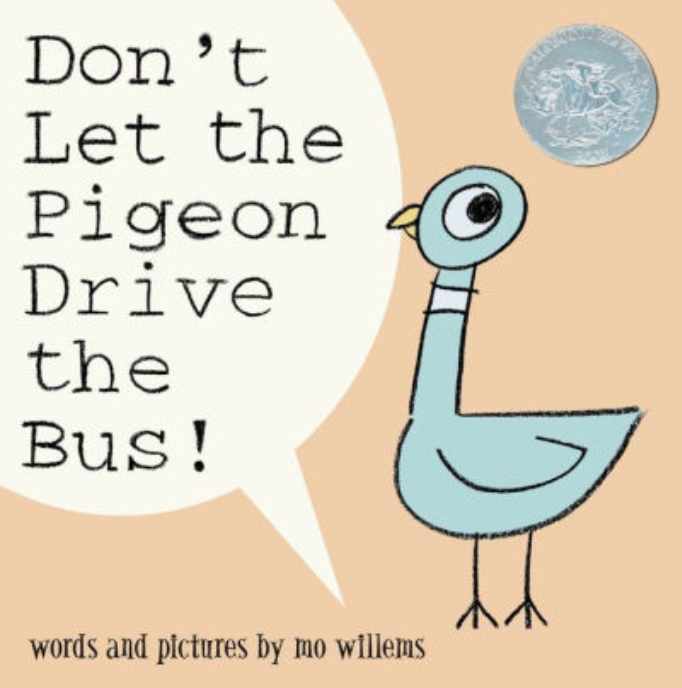