Bartholomew and the Oobleck

What’s oobleck? Why does Kind Derwin want it so badly? And what will happened when it hits the ground?

When King Derwin grows tired of the same four things always falling from the sky, he asks his magicians to create something new. They say they will and that it will be called oobleck. The next morning the pageboy, Bartholomew Cubbins, sees oobleck falling from the sky, causing problems all over the place. He tries to stop it the best he can, but it is only when he gets King Derwin to take responsibility and apologize that the oobleck stops falling.

Dr. Seuss’s Bartholomew and the Oobleck provides many philosophical topics that could be discussed in the classroom. It poses questions about greed and desire, authority, the environment, and how things are perceived as right or wrong. While some of these topics may seem difficult to grasp, children should be able to latch onto them easily with examples from the book, because these are aspects of their lives that are developing. Children are presented with all sorts of authority figures in the form of parents, teachers, and places where there are special rules; thus, they will have plenty to say on their views of authority.

The book opens with King Derwin growing tired of the same weather year after year. The first philosophical topic comes from his desire for a new type of weather and his belief that he deserves to have it. The questions should allow for a discussion about desire and how it can affect people around you: can desire be placed over higher ideals? Ask the children what they think about wanting new things and if that’s all right. Depending on their age, children might have very liberal views of desire: many of them may see nothing wrong with always getting what they want; work with this belief and see if there is a point where they eventually agree that a person can want too many things and may not appreciate what they already have. Try to bridge this desire to greed. If we allow our lives to be run by desire, can this be seen as a form of greed?

The second question set explores social philosophy and the nature of authority. What–or who–gives rulers the right to rule? Reasons could range from divine right to a ruler only being necessary when needed to do what is right for the people. King Derwin serves as a perfect example to get children discussing authority figures and what makes a good king, or what gives a king the right to rule. Hopefully you can connect these ideas to other authority figures in the children’s lives. They might have parents and teachers in their lives that they want to talk about. Ask them to explain how they feel about these authority figures, and what makes them good or bad people to make decisions for others.

Social philosophy is further explored in the third question set with a discussion about the ways that one can or should govern. The world has never had one universal type of government. Views vary on what legitimizes a government or gives it the right to govern. Many children might not be familiar with the variety of forms of government in the world. Some examples could be dictatorships and how all the power is left to a single person; democracy, in which an elected body represents the will of the people; or communism, in which every person in the society is equal. You may want to explain some of these basic ideas to the children even before beginning the discussion (more examples can be found here). If you choose not to introduce those types of government, then the discussion will probably focus on the ideals behind certain types of government (e.g. democracy represents the people so the children will likely say something along the lines of “I think the people should get to choose what happens, not the king”). These questions could also serve as a starting point when teaching children about the different types of government in the world.

In the fourth set of questions, the focus is on environmental philosophy. The oobleck wreaks havoc on the kingdom. Both the kingdom’s people and animal residents are harmed; however, this harm was caused by human action. This harm parallels humans’ relationship with the environment and how they should treat it. It also asks the question of if there are consequences for not treating it in the right way. Do people have certain responsibilities to the environment, or is it something that they can use in whatever way they wish? The children will likely agree that humans do have responsibilities to the environment, but try to get them to elaborate on why and what those responsibilities might be.

The final topic is ethical philosophy, which covers similar ideas to the questions in the previous set. It’s brought up by the King’s apology at the end of the story, which raises issues of when one should take responsibility for their actions, how and when they should help those in need, and when they can decide what is best for others. This set focuses on how the King’s apology magically fixes everything. Try to get the children to think about whether apologies can always make things better and if they are always a good thing. Part of this question set ties in to the previous sets dealing with authority and government.

The Nature of Desire and Greed

At the beginning of the story the King is tired of the usual weather.

The Nature of Authority

The King is obeyed for most of the book.

How Should We Govern Ourselves?

This story takes place in the Kingdom of Didd.

Our Relation to the Environment

The magic that creates the oobleck is made up of some gross stuff.

When the King says sorry, all the oobleck goes away.

Oobleck is a real substance that has been named after the oobleck in this story. It is simply 1 cup water, 1.5-2 cups corn starch, and a few drops of green food coloring (or any amounts with the same ratio). An activity would be to set out a large sheet of plastic wherever you’re working and make some with the children. Let them play with it for a while. (If possible, an oobleck fight would be ideal.) Then ask the kids how they would feel if this stuff fell from the sky.

Original questions and guidelines for philosophical discussion by Marek Buchanan. Edited June 2020 by The Janet Prindle Institute for Ethics. 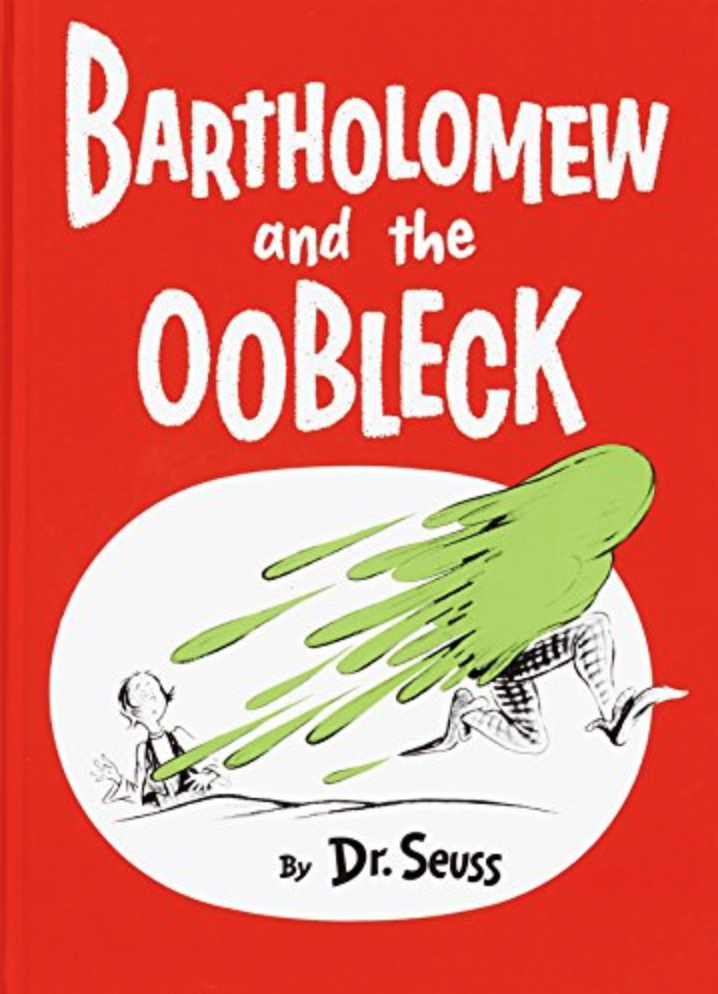