A Bad Case of the Stripes

This is a story of an insecure girl who learns to be happy with her identity.

A Bad Case of Stripes is the story of Camilla Cream, a girl who loves lima beans and worries about others’ opinions of her. On the first day of school, Camilla wakes up to find herself completely covered in rainbow stripes! If the stripes were not bad enough, Camilla’s skin develops everything people suggest she has – someone says “checkerboards,” another says “bacteria,” and she breaks out in checkerboard pattern and bacteria tails. When the doctor, specialists, experts, and many others cannot figure out what’s causing the stripes, a little old woman appears with what just might be the cure.

The core theme of A Bad Case of Stripes is learning to be yourself and being comfortable in your own skin… literally. Philosophically speaking, the book deals with the issue of identity, spun in several different ways.

Camilla is introduced as a girl who worries a lot about what people think of her and whether they like her, and as a result, her sense of self is highly malleable. In fact, her insecurity manifests itself by turning her skin stripy. When Camilla goes to school the day after the stripes appear, she and her classmates realize that whatever they say to her becomes a pattern on her skin. This continues until one woman, in a misguided attempt to cure her, tells Camilla to “become one with [her] room.” At this point, Camilla appears to merge with the walls and bed of her room. The careful reader or listener will realize that Camilla’s body is trying to please everybody she meets, thus making her a victim to the power of suggestion. Whatever they say about her becomes reflected in her, and, subsequently, Camilla realizes she has to be true to herself and her own desires.

The story raises the question of whether or not it is important to care about what people think, as well as what the consequences of such worrying are. At some point, Camilla becomes almost unrecognizable, and though she does not appear to lose her sense of self, our perception of her changes. In this way, the function of identity is raised: is it something one defines for oneself or is it something that is defined by others? Throughout the book, Camilla visibly and physically changes many times. She is always called “Camilla,” but it seems that by the time she has morphed into the walls of her room, there is really no recognizable Camilla left. Thus the question must be asked, is she still Camilla Cream?

The philosophy of personal identity has occupied many minds throughout history including the philosopher John Locke, who spent a great deal of time considering what it means to have an identity. He concluded that identity is linked to consciousness of self. Although it is controversial, the idea of self-consciousness persists and is addressed in A Bad Case of Stripes. Because she remains conscious of who she is even when she is transformed into the walls of her room, Camilla, at least in Locke’s theory, never loses her identity.

An alternative theory of identity is essentialism. Aristotle believed all things had “necessary” and “accidental” properties. Necessary properties are what a thing requires in order to be that thing; accidental properties are properties that are true of a thing, but are not required in identifying that thing. As far as identity goes, the book prompts us to think about what aspects of Camilla’s identity are necessary and what are accidental. It would seem her physical identity is an accidental property, as it changes, and she still believes herself to be Camilla. However, the old woman calls Camilla in girl form the “real” Camilla. Does that mean her human form is somehow a necessary part of her identity? These are some of the many topics within the bounds of the philosophy of personal identity.

A Bad Case of Stripes can also be used to discuss bullying. Camilla is teased by her classmates and talked about on the news, both of which affect her mental and physical states. Whether or not what the reporters do is bullying is an interesting question. The media is supposed to objectively present facts, but are there times when news reporting crosses a line? The reporters’ behavior may seem invasive, but one must consider whether or not the reporters have a moral duty to share stories like Camilla’s with the public.

The way Camilla’s classmates treat her is a matter of ethical concern. Camilla’s classmates are a textbook example of children who tease other children, thus acting as bullies. Bullying is a serious ethical issue, but philosophers debate what it is that makes bullying morally wrong. How does bullying hurt someone? What should a person do when he or she sees bullying occurring? These are the kinds of moral issues about bullying presented by A Bad Case of Stripes.

A Bad Case of Stripes offers a wealth of topics to be plumbed in philosophical discussion – self-perception, identity, and bullying. Because of this, one has the option of tailoring the reading and discussion experience to best benefit the students.

Camilla Cream loves lima beans but refuses to eat them because people tell her they are gross.

Camilla develops “a bad case of stripes,” which seems to change as people try to figure out what is wrong with her.

Others’ Perceptions and Bullying

Camilla’s classmates laugh at her and call her names, and the news reporters set up outside to gawk at her.

Original questions and guidelines for philosophical discussion by Jo Fletcher. Edited June 2020 by The Janet Prindle Institute for Ethics. 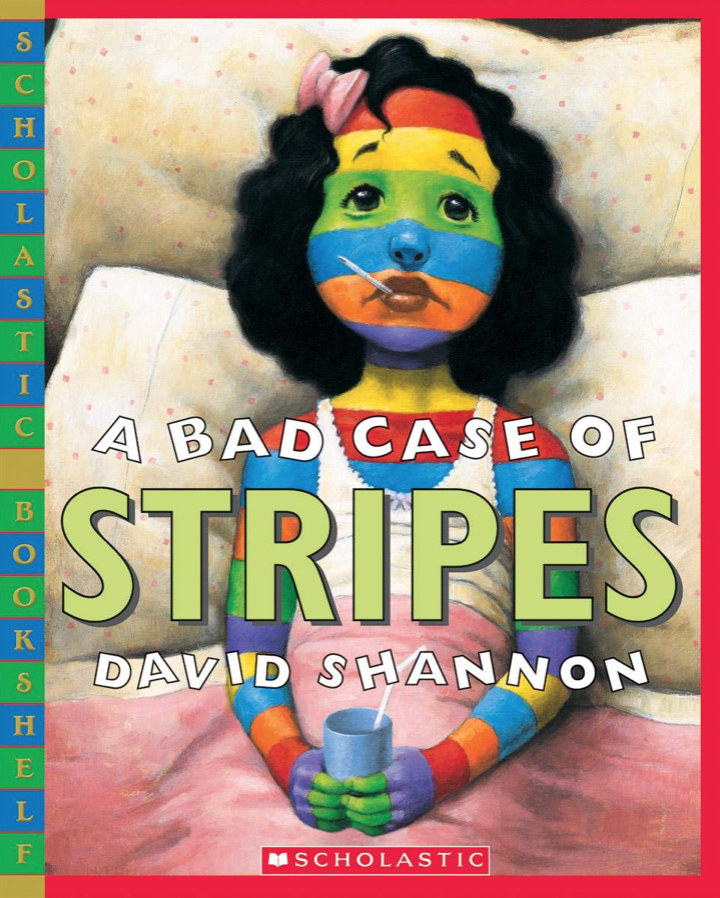