Abuela will spark a wide-ranging discussion about ideas like human enhancement and immigration.

Rosalba boards a bus with her Abuela. Rosalba talks about how her Abuela’s first language is Spanish. Spanish words are scattered throughout the story, and Rosalba translates these words for the readers. While they are in the park looking at the birds, Rosalba wonders what it would be like if she could fly. All of a sudden, Rosalba is soaring in the sky, and her Abuela joins her on this newfound adventure. The rest of the story follows Rosalba and her Abuela as they fly across New York City, sightseeing and enjoying their time with one another.

Abuela is a bilingual children’s picture book that raises important questions about human enhancement and immigration. Since the majority of the story is spent following Rosalba and her Abuela as they fly through the sky, Abuela asks us to consider what it would be like if we could fly. Flying is only one kind of human enhancement, which can be thought of as an improvement that conquers the limitations of the human body. Many human enhancements exist in the world that we might not initially consider: for example, think about how wearing glasses might give you better eyesight, getting braces might help you to have straighter teeth, working out allows you to become stronger and faster, or even practicing to improve at an instrument.

The example provided by the book is an excellent kick-off for philosophical conversations. Ask the children, have you ever imagined that you can fly? Would you like to fly like Abuela and Rosalba? If you could have any power in the world, what would it be? If you do have a power or an ability, are you still human? How would others see you? Is it better to fly or be invisible? Or perhaps to never die? Is it fair for only you to have this power, or should everyone have the same power? These are just some questions that could get you and your kids thinking about concerns involving human enhancements.

Also present in Abuela are questions about immigration status and state control, both of which are a central topic in immigration philosophy. Why should someone like Abuela leave her home to go somewhere else? What roles do immigrants play in society? How are they treated, and why are they treated in this way? Why is there a backlash against immigrants? How do countries decide who can immigrate to the country? What is a permissible system that countries can use to determine the admittance of immigrants? These are all questions that can be considered when thinking about immigration. Some people consider immigrants as “other” because the country they currently reside in is not their original home. In Abuela, the author embraces immigrants through the pictures. When Rosalba is on the bus, the people around her are of all different ethnicities. This trend of diversity continues throughout the entirety of the story, evident in the illustrations.

The two very different topics of immigration and human enhancement are presented in Abuela. Human enhancement can involve very playful examples while also diving into serious topics that ask questions about morality and ethics. Immigration can be a very personal topic, so classmates should be reminded to respect one another’s responses and experiences.

Rosalba mentions that “Abuela speaks mostly Spanish because that’s what people spoke where she grew up before she came to this country.” She says, “Abuela and I are always going places.”

Rosalba wonders, “What if I could fly?” Rosalba and her Abuela soar through the sky, over New York City, as they continue on their adventure.

Flying can be referred to as “human enhancement.” “Human enhancements” are things that change the way humans can act or live. Usually, people want an enhancement because they think it would improve their lives.

Original questions and guidelines for philosophical discussion by Daniel Quintero and Emma Goidel. Edited May 2020 by The Janet Prindle Institute for Ethics. 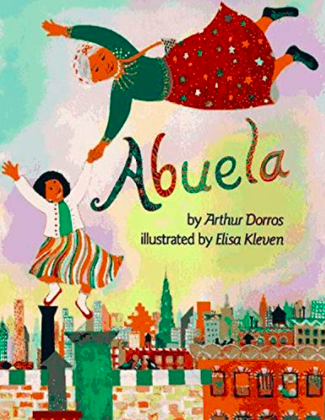