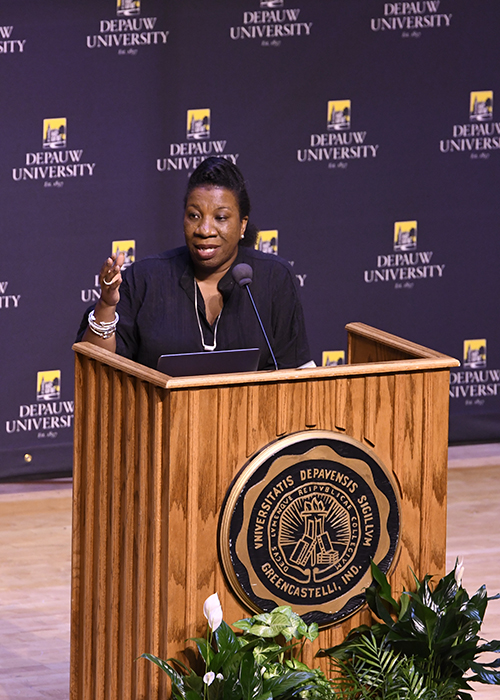 On September 6, Tarana Burke, Founder of the “me, too.” movement, came to DePauw University. Speaking before an audience of nearly 1,000 at Kresge Auditorium, Burke told students about her background and described pivotal moments in her life.

She said she grew up in an “average working class family from the Bronx” and experienced a “rich, cultural [and] historical upbringing.” While Burke was active in community organizing at a young age, it was not until college that sexual violence became her focus. She recounted how Maya Angelou’s “Why the Caged Bird Sings,” prompted the realization that she was sexually abused as a child.

Experiences at the 21st Century Youth Leadership program shaped Burke’s outlook on how to address sexual abuse. More than a decade prior to the #metoo appeared on Twitter, Burke started a Myspace page for victims of sexual abuse, where she witnessed the prevalence of sexual violence across the world.

While the hashtag gained notoriety following the allegations against Harvey Weinstein, Burke expressed words of caution about its virality. “Viral is the media hijacking the actual movement,” she said. Burked lamented the media’s shift in focus from the victims to the perpetrators. “This movement is about survivors,” she said.

One of the immediate goals of the “me, too.” movement is to create a comprehensive database of resources for community healing. The first phase of this website will roll out in October.