Some of the puzzling and intriguing issues that arise when discussing the process and nature of existence are a mystery.

Yellow and Pink is a story about two wooden figures who attempt to figure out how they came to be. As they become conscious of their presence in the world, they begin to wonder how they got there and how they can know this for certain.

Yellow and Pink is a story about two wooden figures who attempt to figure out how they came to be. As they become conscious of their presence in the world, they begin to wonder how they got there and how they can know this for certain. Yellow and Pink consider a series of possibilities, in which Yellow attempts to use science to explain how they got there while Pink remains skeptical of the whole idea. Pink continues to doubt and question Yellow’s explanation that emphasizes the role of accidents in creation. Ultimately, they both agree that there are some questions that they cannot answer.

This story deals with the philosophy of religion and the philosophical arguments surrounding the nature and existence of God in relation to the creation of beings. In thinking about creation, Yellow and Pink discuss issues that adults and children alike can relate to. Many of the most puzzling and intriguing issues that arise when discussing the process and nature of existence prove unanswerable. Discussing this book with children provides them with the opportunity to explore the many views and opinions that exist surrounding the question of creation and the existence of a higher power. While religion is often a controversial topic, presenting it in a philosophical manner will provide children with a safe environment in which to discuss with fellow students their ideas, concerns, and questions about religion and its applicability to their personal lives.

As the final page of the story suggests, Yellow and Pink are wooden figures that exist because a man has made them. This man crafted them with similar materials, yet gave them slightly different forms. Even though the children reading the book may come to conclude that the man indeed did make the wooden figures, the fact that Yellow and Pink themselves do not come to this conclusion proves interesting. This aspect of the story leaves room for speculation and evaluation of the figures’ existence.

Yellow and Pink also discuss the nature of accidents, and whether or not they could have come to be purely out of an accident of nature. It is often difficult to distinguish between what is an accident and what is not an accident, and this question will captivate children of all ages. While trying to work out what can and cannot be considered an accident, children can critique Yellow’s explanation of how he came to exist. There seem to be certain conditions that may or may not enhance the likelihood that the figures came to be simply by accident. These may include perfection of form, length of time, and the ability to sense. All of these elements of the story can be used to examine and define the presence of accidents within our daily lives.

Additionally, after developing a basis for understanding accidents, the question about how the world itself was created can be addressed. This can be thought of in relation to a higher power and whether or not God played a role in the creation of the world. Most children like to reason that everything has a cause, but this becomes difficult when we start thinking about things on a larger scale. This perplexing problem is one that many philosophers have attempted to make sense of since the notion of causality must be examined in terms of the very first cause. Within the area of religion, philosophers have greatly debated over the existence or non-existence of God. In discussing the possibility of a higher being with children, this book proves useful in presenting some possible arguments for the existence and non-existence of a “creator.” The issue of religion captivates most children, as they are constantly trying to figure out what they believe. In taking into account Yellow’s and Pink’s respective opinions, those of their classmates, as well as those that have been told to them by parents or other authority figures, children can begin to think critically about the topic of religion. Ultimately, no conclusion is necessary, for by allowing children to generate ideas and examine possibilities the discussion will prove most worthwhile.

The Nature of Creation

Pink thinks that Yellow’s form is admirable and that someone must have made him.

The Meaning of Accidents

Yellow thinks that they were just an accident and that they somehow just happened.

The Nature of Accidents

Pink accepts Yellow’s explanation for how one of them came to be, but he does not understand how the same series of accidents could happen twice.

Pink wants to know why he and Yellow are so different if they happened to come to be in the same manner.

The Possibility of a Creator

At the end of the story, a man comes over and picks up Pink and Yellow, but Yellow and Pink do not know this man.

The Origin of the World

Yellow and Pink wonder about how they came to be, and they try to use the world around them to help them understand.

Original questions and guidelines for philosophical discussion by Marielle L. Amrhein archived here. Revised by Ariel Sykes. Edited May 2020 by The Janet Prindle Institute for Ethics. 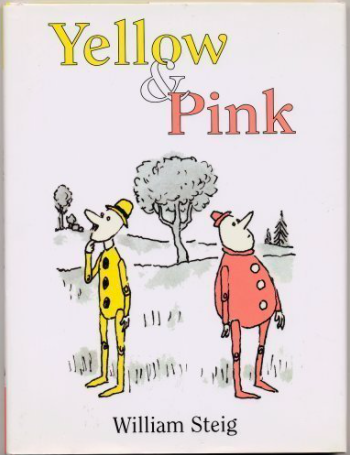