The polar bears of Churchill, Manitoba live their lives in fear of climate change. A bear named Winston, renowned for his leadership and bravery, rises above them all to take charge and save their homes on the ice. Winston proposes that global warming is not the fault of polar bears at all; there was nothing that they did to make it worse, except for Winston’s smoking habit. Winston decides to protest the humans who caused climate change, but Winston’s wife refuses to join until Winston can quit his smoking habit.

Three key themes of leadership, blame, and war can be explored during the facilitation to introduce politics to a younger audience.

Leadership here is presented as a flawed concept. First, Winston is the apparent leader simply because he is the strongest. There is no form of election or representation of other bears as possible candidates, which suggests that Winston’s leadership is similar to that of a dictatorship in which he determines all the actions of the other bears with their full cooperation. Winston’s leadership is never questioned by any polar bears except for the ones who are closest to him. Winston’s wife and cub are the only ones to oppose Winston and because of their opposition, significant changes are made. They could be seen as being representative of the voice of the minority. This is especially relevant to children, because it promotes their importance in the way decisions are made around them. Children themselves are a minority, because they are often sidelined by the decision making done by adults.

This story also explores themes related to blame and responsibility. It is not solely the fault of humans that global warming has increased; it is also the fault of the polar bear’s leader, Winston, who smokes. If the children are able to acknowledge the transition from Winston’s smoking habit to a much greener alternative, they will have just learned the ability of self realization in which they themselves can revise their own positions in the light of someone else’s criticism. Furthermore, the polar bear’s projection of blame onto unsuspecting tourists resembles the inability to take responsibility for one’s own action or the inability to identify the actual source of causation and mistaking the causation as something that is “most likely” the culprit. When identified, the children learn not to jump to immediate conclusions and instead to appreciate the process of responsible action, free from blame and guilt.

War here is a metaphor for the polar bear’s struggle against the humans in a fight to preserve their homes. Overlaps between the historical Winston Churchill and the fictional Winston of Churchill as well as current leadership can be explored to identify the traits prominent in a real leader during wartime and during a peaceful setting. In this way the children can compare the leadership they know to previous leaders to really understand the measures that were taken during the war without actually having to know the atrocities that happened.

Winston was a fierce, brave bear, and when Winston spoke, every bear listened.

Ice is melting because it’s getting too warm around here…

We will fight for our ice. We shall never surrender.

Original questions and guidelines for philosophical discussion archived here. Edited May 2020 by The Janet Prindle Institute for Ethics. 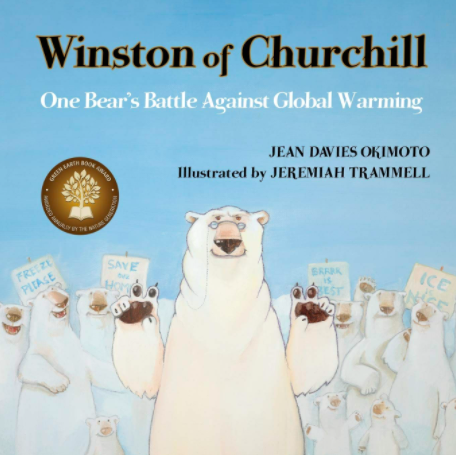