Who Is the Beast?

In thinking and discussing the concepts of difference in this book, fear becomes central to the conversation.

Tiger looks into the pond and begins to wonder if he is “the beast” all the jungle animals are afraid of. When the tiger goes back to the jungle animals to find out if he is the beast, they see he discovers that he shares some of the same characteristics with each of the other animals.

In the children’s story, Who is the Beast by Joseph Baker, there are two main philosophical themes to be extracted. The first is the philosophical question of fear including its dimensions and its core essence. The second is the question of difference and the perception of the “Other.” Both of these questions are particularly pertinent in today’s world when misunderstanding and fear motivate social problems.

In thinking and discussing the concepts of difference, fear becomes central to the conversation. Understanding fear and its effects on the individual is the first step in understanding the self and, ultimately, society. Without pondering fear one cannot grasp the core essence of the philosophical question of difference, because fear is often the main motivation behind the creation and perception of difference. Fear, acting as a natural reaction to the unknown, has programmed the individual to perceive the unfamiliar as an Other, Beast, etc., consequently viewing the unfamiliar as a threat and, therefore, an enemy. It is fundamentally important to the discussion to make the tie between fear, irrationality, and emotion. Fear is an emotion first and foremost, and is therefore not always susceptible to logic and rational argument. This reality triggered by fear springing from the unknown results in the dynamic combination that contributes to fear being the natural source of the perception of the “Other.”

The role fear plays in the creation of the unfamiliar is key to understanding and unlocking the negative dimensions of the “Other.” Through understanding and acknowledging fear and its central role in difference, thereby releasing its power over us, we can begin to explore and understand what initially scared us. Once fear has dispelled its inherently defensive attitude, the individual is open to seeing the world anew. With renewed perception the groundwork for tolerance and understanding is laid; and in removing fear, possibilities for growth abound.

In the story, each of the jungle animals are scared when they see the beast.

Each of the jungle animals sees a different piece of the tiger that makes them think they have seen a beast.

Tiger looks into the pond and begins to wonder if he is “the beast” all the jungle animals are afraid of.

When the tiger goes back to the jungle animals to find out if he is the beast, he discovers that he shares some of the same characteristics with each of the other animals.

At the end of the story, the tiger and the other jungle animals realize they are all beasts.

Original questions and guidelines for philosophical discussion by Brianna R. Armbuster. Edited May 2020 by The Janet Prindle Institute for Ethics. 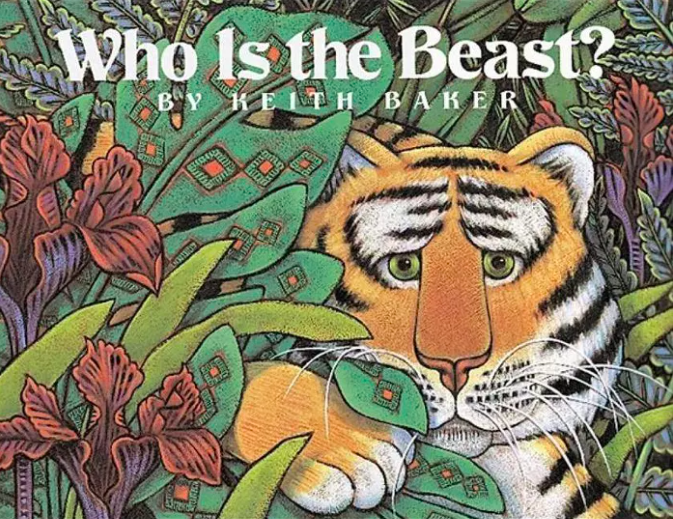