What Do You Do with an Idea?

What Do You Do with an Idea? will spark an abstract discussion on the nature of ideas and creativity.

This story is about a child who one day discovers he has an idea. He wonders where the idea came from, but he feels afraid to tell others about his plan because they might think it is silly. Instead of giving up, the child decides to nurture and feed the idea. Something magical happens—the idea bursts out into the world, bringing with it a miraculous change.

Read aloud video by Storytime with Will

What Do You Do With An Idea is a story that addresses some of the most intriguing philosophical questions. The book’s delightful illustrations and thought-provoking narrative are enchanting. The concept of an idea can be hard for a child to grasp at first, so it is suggested that you begin by giving various examples of past inventors whose ideas turned into real, tangible inventions. Here are some suggestions: Sarah Goode, who invented the first folding cabinet; Whitcomb L. Judson, who invented and constructed the first zipper; Thomas Edison, who invented the first light bulb; the Wright Brothers, who invented the first successful flying plane; and Zora Bell, who at seven years old became the youngest person to create a mobile app game.

Can you think of a time when you had a sudden flash of insight and wondered, “Hey, where did that come from?” or “Wow, that could work!” With this wonderful tale, a young boy suddenly finds himself with an idea. The idea follows the boy around, occupying much of his attention. Once a plan has been created, it is often hard to forget. Ideas have a way of sticking around, nagging at us from the back of our minds. By demanding our attention, an idea can feel real, like it is alive. In the story, the young boy finds that his plan requires attention. He begins to feed and play with his concept. It makes the young boy happy to care for his idea. With the boy’s encouragement, the idea starts to grow bigger. Ideas can have an element of excitement to them, and when we engage with ideas, we get pulled into a sense of purpose.

However, there are times when we doubt our ability and our ideas. The young boy experiences this kind of self-doubt. As the idea grows, the boy becomes uncertain of himself and skeptical about whether his plan is viable. How do we determine if an idea is good or bad? What makes one idea different from other thoughts that we have? What makes an idea creative? What motivates us to pursue innovative ideas? Another element of an idea is its creativity. Having an idea involves a creative process that requires attention, commitment, and effort to communicate something purposeful in life.

Consider how varying cultural values affect receptiveness to people’s ideas. Who deems an idea appropriate? Is an idea only relevant if it meets a certain standard? How can educators recognize creativity in students and help them to engage with the creative thinking process? In the story, the boy is afraid that other people will laugh and think his idea is silly. How many of us can remember times in our lives when we voiced our ideas to others only to be told that it is no good and a waste of our time? What makes an idea simple and another more complex? Sometimes it is the “not so good little ideas” that merge with other approaches to create brilliant ideas! Many famous inventors throughout history have been told that their ideas have been silly. Yet they refused to listen to the naysayers and in turn have brought to fruition ideas that have made a significant positive change in the world.

A fun follow up would be for the children to come up with an idea for an invention. Then have them write or draw it on a small slip of paper. Place the paper into a plastic Easter egg. They later can role play their idea of their invention.

One day the boy finds himself with an idea.

The boy walks away from the idea, and it follows him.

The boy tries to ignore his idea, but he finds he can’t stop thinking about it.

The boy finds something magical about his idea and is happier when it is around.

The idea bursts out into the world.

Original questions and guidelines for philosophical discussion by Carol Chandler and Meghan Murphy. Edited June 2020 by The Janet Prindle Institute for Ethics. 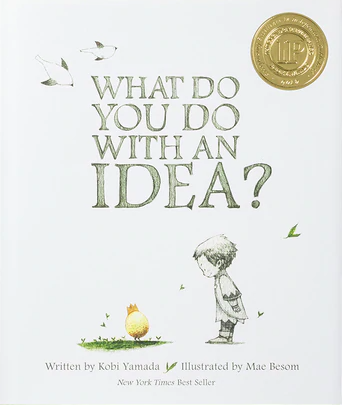