The True Story of the Three Little Pigs

This story raises questions about criminal justice, how we determine the truth, the significance of intent, and about prejudice.

Alexander T. Wolf was framed! All he wanted to do was borrow a cup of sugar to make a cake for his granny. Unfortunately, a bad cold and some unfriendly neighbors land Al in a heap of trouble. Now in jail, Al recounts what really happened to the Three Little Pigs.

In this book, the Big Bad Wolf (who asks to be called Al) recounts his version of what really happened in the story of The Three Little Pigs. He claims that he had gone to the pigs’ houses to borrow a cup of sugar, and they refused. He also happened to have a cold, and his sneezes knocked down the poorly constructed houses. The destruction of the houses killed their respective inhabitants and, since Al didn’t want to let good food go to waste, he ate them. Then, at the brick house, the police and reporters (who are pigs in the illustrations) caught up with him. The reporters changed the story to be more interesting, and he was put in jail. Obviously, this story differs from the traditional version of The Three Little Pigs.

The most salient philosophical issue this story raises is whether or not it is possible to determine the truth about an event that has occurred. In The True Story of the Three Little Pigs, Al presents an account of events that differs from the traditional version of The Three Little Pigs. The difference between the accounts leads one to wonder which version, if either, is the truth. In philosophy, there is some disagreement about whether we can ever know for certain what actually happened. Some philosophers believe that every individual’s experiences are influenced by his or her thoughts and feelings. If this is the case, then no two individuals will remember the same event the same way. As a result, there is no way to determine which perspective accurately reflects the actuality of events because there is no way to remove the subjectivity of experience from the account. Other philosophers disagree and argue that it is possible to figure out what has occurred objectively. Looking back at the story, we can consider which version of the story is true and if it is even possible to answer that question.

Another issue that The True Story of the Three Little Pigs leads us to consider is whether a crime must be committed intentionally. In the story, Al claims that the pigs’ deaths were accidental. He implies that because his acts were unintentional, he should not be in trouble. Some people may argue that an accidental act can still be criminal; others maintain that without the intent to commit the act, the act is not a crime. In our legal code, we take intent into consideration and treat accidents differently than intentional acts. By looking at Al’s case, we can consider whether or not an accident can be a crime.

In The True Story of the Three Little Pigs, Al is recounting his version of events from jail. This brings up an interesting philosophical issue: how do we respond to a crime? In our society, we put criminals in jail; however, this is not the only way to handle a criminal. Some people feel that jail does not address the issue appropriately. There are those who argue that it would be best to rehabilitate a criminal so that the individual will not commit any more crimes in the future. Others feel that a criminal should be punished and that punishment will only be meaningful if it relates to the crime committed (for example, a vandal would be punished by having to clean up everything that was vandalized). Proponents of the jail system believe that it is ideal to isolate criminals in order to protect society. You can look at Al’s case and consider whether or not jail is the best way to respond to his criminal acts.

The final issue The True Story of the Three Little Pigs brings up is the status of marginalized groups in society. When looking at the illustrations in the text, it becomes clear that Al is living in a society of pigs. Minority groups are often stereotyped, scapegoated, and treated poorly by the other groups in society. You can attempt to figure out whether or not Al is being treated fairly and talk about how people from marginalized groups should be treated. Specifically, when analyzing this story, you can discuss how bias affects the judicial process and what makes a trial fair.

The story Al presents is very different from the traditional version of The Three Little Pigs.

Al claims to have knocked down the pigs’ houses by accident.

Al is sent to jail for his crimes.

Al is the only wolf in a society of pigs. All of the reporters and police are pigs. 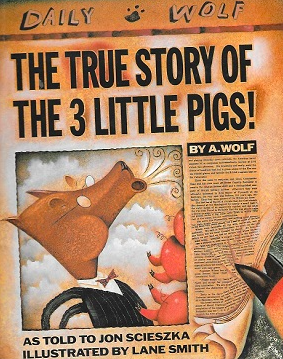