The Story of Ferdinand

The Story of Ferdinand raises questions about conformity, the ethical treatment of animals, and the value of peace vs. aggression.

A peaceful bull lives in a pasture with his mother and other young bulls. All the other bulls like to run and buck, but Ferdinand likes to sit under his favorite tree and smell the flowers. When five men come to take the biggest and roughest bull away, Ferdinand stays calm and content. Suddenly, a bee stings Ferdinand. Startled, he loses control, bucking and fussing more than anyone else! Assuming that he is a very fierce bull, the men take Ferdinand away force him into the fighting ring. They become very angry and surprised when Ferdinand refuses to fight.

Our society puts a lot of emphasis on teaching children to make ethical choices, but it would be difficult for any of us to determine a clear set of criteria that makes an action right or wrong each time. The Story of Ferdinand is an example of a young protagonist who grows up very comfortable in his own skin and with his own decisions, but is soon confronted with difficult situations that challenge his peaceful way of life.

Children, especially males, often grow up socialized to believe that they should be tough. Amidst a cohort of young bulls who like to fight each other, Ferdinand is the lone, sensitive bull who prefers to sit and smell the flowers. At first, when Ferdinand’s mother sees all the other young bulls playing and sees Ferdinand behaving differently, she worries that he is lonely. But when she understands that he is happy, she relaxes. Ferdinand’s mother ultimately decides that it is fine for Ferdinand to be different, but her initial concerns reflect the underlying ethical question of whether it is beneficial for a person to conform to norms. Some argue that norms originate outside the self and thus should not govern how the individual behaves, while others maintain that norms serve an important role in regulating our behavior to best serve the interests of society.

Students will often decide that it is completely acceptable for two different groups (or a group and one outlier) to enjoy different things. Some argue that it is important for peers all to behave the same way in certain situations. The discussion on conformity can focus specifically on peer pressure and bullying, which is especially appropriate in a school setting. If everyone else around you is doing something, can you assume that it is acceptable behavior? When phrased this way, it may seem that the answer is clearly no. However, given specific situations, our answers may become more complex. For example, it seems like people should act the same way when playing games. After all, we model our behavior on those around us, and so it can be difficult to determine when to follow and when to “go your own way.” One interesting activity would be to go around the circle and have students think of a time in which they did something different from everyone around them. One could structure an entire session on the nature of being different and the ethical issues it raises.

The second question set deals specifically with interactions between species. Humans use animals for human purposes, such as food, clothing, medical experimentation, etc. Most humans view themselves as somehow more important than all other animals. But, it is difficult to justify why it may be so. Most students will agree that Ferdinand should not have been taken away for bullfights, but they may disagree about whether or not his species is morally important and if so, why. Some people reason that species membership is an arbitrary distinction that should not be the basis for how one is treated, no more than should race, gender, ethnicity, and so on.

The third question set deals with peace in general, which should certainly be considered regarding interactions between humans and non-humans, but also among humans themselves. Children are taught from an early age not to fight, but it is sometimes difficult to tell what this means. What about fighting in self-defense? In considering Ferdinand’s reaction to the bullfighters who want to stick him with pins and spears, students can debate ways to respond when someone else initiates a fight. Most argue that it is allowable to defend oneself against attack. Some, though, maintain that violence is never or almost never acceptable, like the advocates of ahimsa. The term means “no harm,” a Sanskrit term that is the foundation of many Eastern philosophies. A subscriber to ahimsa, like Mahatma Gandhi, a peace activist and celebrated pioneer of passive resistance, would maintain that a nonviolent response is always more appropriate. Another major 20th century proponent of nonviolent resistance is Martin Luther King Jr. While we teach the general mantra, “don’t fight,” television, video games, and other forms of entertainment can portray a violent lifestyle as a norm and sometimes as something to admire and emulate. Perhaps some forms of fighting can be acceptable form of play, like when children wrestle together. However, does this mean that there is something wrong with not enjoying rough play or violent video games? Parents and educators have been disputing through the ages whether violent play and entertainment is healthy or not; here is a chance for children to add their voices to the debate.

All of the other bulls with whom Ferdinand grew up like to run and fight, but Ferdinand wants to live peacefully.

Ferdinand wants to stay with his mother and sit quietly under his favorite tree, but the five men come and take him away for the bullfight.

Most everyone in the story except for Ferdinand enjoys fighting. 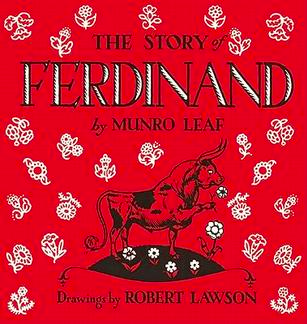