The Paper Bag Princess turns traditional fairy tales on their heads to raise questions about gender roles, identity, and happiness.

An unconventional princess named Elizabeth happily prepares to marry Prince Ronald. Before they are able to marry, a dragon swoops down, burns down the castle and everything with it, and kidnaps Prince Ronald. Elizabeth puts on a paper bag and sets off to save Ronald. Elizabeth outwits the dragon by asking him to perform feats of strength until he passes out. When Ronald sees Elizabeth in a paper bag rather than beautiful princess clothes, he is disgusted. Ronald tells her to come back when she looks like a “real princess.” Elizabeth responds by telling the prince he’s a bum.

The Paper Bag Princess begins by taking a scene present in almost all fairy tales and promptly shakes things up by having the prince kidnapped and the princess going to the rescue. This brings up valuable questions about gender roles and fairy tale norms–why princes aren’t always kidnapped and princesses are. As we move more into gender roles, the book poses a similar topic by having Ronald call out Elizabeth for not looking like a princess. This brings up questions about what it means to be in a role such as a princess, leading into the greater topic of one’s identity in general. On the final page, we see Elizabeth joyfully heading into the sunset, still in her paper bag, and leaving behind the prince. Here the book asks us to wonder about the nature of happiness. It serves as a jumping point for asking, “What makes us happy?” and “What does it means to be happy?”

As a “Paper Bag Princess,” Elizabeth strays far from the standard image of a princess, and the little philosophers will have no trouble seeing this. Ronald tells her, “Come back when you are dressed like a real princess.” Discussion can begin by asking: “What are some common differences between princes and princesses?” and “Why do we expect them to act and look differently?” The children will probably be familiar with the fairy tale tropes of strong princes saving weak princesses, and it will be helpful to have them think of stories they know in which the prince saves the princess. Following this, it would be useful to ask for physical, and then behavioral, descriptions of differences between Elizabeth and other princesses. Elizabeth saves Ronald, instead of vice versa. Why is this unusual? After some discussion from the children, it is easy to segue into questioning whether the roles of prince and princess are natural or something that exists because we say so. You can create strong discussion here by asking about definitions of other gender roles, like “Can you name some roles that are meant for mostly men and mostly women?” If the students aren’t coming up with anything, provide some suggestions like nurses, firefighters, or police officers. Discussion could also center on more child-sized roles, which they may find in games like playing house, playing with dolls and action figures, and playing sports. After identifying gender roles, we can challenge the value of these roles by asking “Is it okay for us to say that most nurses should be women? Or that most women should take care of children? Why or why not?” Or, “Is it okay if we decide that some games are for girls and some games are for boys?” A good followup question to this would be “What if you were a boy and wanted to take care of children or a girl and wanted to be a firefighter?” This helps break down the complicated discussion of gender into very accessible scenarios with which the young philosophers will be familiar.

Social roles are the expectations, responsibilities, and behaviors we adopt in certain situations, which are then reinforced by society. Do gender roles, and other social roles, determine our identity? What does it mean to fill a role? We can begin to work with these questions by looking at the ways Elizabeth’s and Ronald’s identities are determined in the story. Elizabeth tells Ronald that although he looks like a “real prince,” he is in fact a “bum.” What does she mean? To be a “real prince” do you need to look like a prince? Act like a prince? Feel like a prince? Here, you can talk about aesthetics, and how they fit into identity. Things are determined by how we perceive them, and aesthetics makes a large part of our perception; but it could be argued that aesthetics constitute not only how something is perceived, but also what it is. This story, however, seems to lean in the other direction, toward the arbitrariness of aesthetics. If the students sympathize with Elizabeth, you might expect them to answer that how you act is more important than how you look–you have to act like a prince to be a prince, and Ronald is not a prince, because he is neither brave or nice. You can push the conversation further by asking, “If Elizabeth still felt like a princess and thought of herself as a princess, would she be a princess?” Similarly, if one decides that Elizabeth acts in the way a princess should act, is this enough to make her a princess? What if the rest of the kingdom doesn’t agree? What if she doesn’t agree? Good discussion comes from the book by asking, “Is Elizabeth still a princess when she is outsmarting the dragon? Why, if she doesn’t look like a princess and she isn’t acting like a typical princess? At the end, is she still a princess?” It is good to point out here that she has taken off her crown by the final page. Does this mean one can choose to be a princess or, indeed, any social identity? This would be a good time to ask the children to think of their own lives and the roles they fill as students, siblings, friends, etc. In each of these roles, do you have to look, act, or feel a certain way? And finally, do these roles matter to you?

Elizabeth’s happiness plays a huge role in The Paper Bag Princess. Not only does her happiness work to justify her non-conformist act of leaving Ronald, the story is bookended by two illustrations of a happy Elizabeth. Working chronologically through the story creates an opportunity to discuss the meaning of this happiness. When asking about Elizabeth’s life before the dragon attack, it is important to show the picture on the first page as evidence for the argument that she is happy in the castle. Here, one should try to have the students answer the question: “What do you think her life was like before Ronald was taken? Was she happy? Why or why not?” This becomes a foundation for asking about Elizabeth’s happiness throughout the rest of the story. The question “Is Elizabeth happy after the castle is burned down?” pushes into a deeper question about what it means to be happy.

Discussion can be created by pointing out all of the illustrations where Elizabeth is smiling when tricking the dragon and also noting that there are no pictures of Elizabeth sad. Asking “Can someone be happy with just a paper bag? Or do they have to be comfortable to be happy?” brings out further questions about if happiness is entirely subjective in a manner that is easily accessible for growing philosophers. Now observe the last illustration of Elizabeth dancing into the sunset. Clearly Elizabeth is happy, but why? And is this happiness different from, or more valuable than, the happiness of the first page? One philosophical theory that may suit the message of the story is perfectionism, which characterizes human good in terms of the development of human nature. According to this view, one’s life goes well to the extent that one actively uses one’s mind and skills. From this perspective, would Elizabeth still have been happy in the castle sitting around doing typical princess things? When asking this question, it is useful to point out the first and last illustrations in the book to guide a comparison of Elizabeth’s happiness. Finally, we might ask, “Why is Elizabeth happy leaving Ronald? Should Elizabeth be happy?” and “Is she happier now than at the beginning? Why or why not?” In closing, ask students to think of their own lives: “What makes them happy, and why?”

Original questions and guidelines for philosophical discussion by Alyk Kenlan and Maya Ben-Shahar. Edited June 2020 by The Janet Prindle Institute for Ethics. 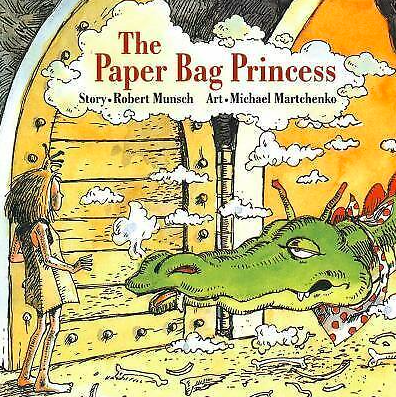