Instead of staying at home, Little Blue went out looking for his friend Little Yellow. They played together, had a lot of fun, and ended by looking like Little Green. When this happened, their parents couldn’t recognize them. The story is a journey in which the parents of Little Blue and Little Yellow and the readers realize what actually happens when blue and yellow mix.

Leo Lionni’s seemingly simple Little Blue and Little Yellow is packed with philosophical content and raises questions about multiple philosophical issues. While all the parts are interconnected and overlapping, the questions are divided thematically into three parts. Each part addresses a distinct concept in philosophy: friendship, knowledge, identity, and the material constitution of things. You can talk about any or all of them.

When Little Blue and Little Yellow hug each other, they merge into Little Green. Since they are best friends, their new color represents a merging of their two individual colors. This raises the question of what friendship is. Do friends have to become completely like each other to be good friends? If not, then what do they have to have in common to be friends? Can you be friends with someone with whom you share no common interest? Is a person who is really different from you actually a better candidate for friendship because their differences might provide lots of interesting things to discuss? These questions can lead to a more abstract discussion of why a person needs friends in her life. Could a person lead a fulfilled life even if she had no friends? These are significant philosophical issues that play a crucial role in children’s lives.

In epistemology (the study of knowledge), knowledge is classified as justified true belief. The story brings up the basic yet important issue of the nature of our beliefs and how new information impacts our beliefs. When the parents assert that Little Green is not Little Blue, they exhibit their belief about their child. This begs the question: is their belief justified and true? That is: did Mama and Papa Blue have the knowledge that Little Green was not Little Blue? Most philosophers would argue that this was simply a belief that was not true or justified. Epistemology tries to understand how we know the things we know. Additionally, it tries to ensure that the things we know are true, because otherwise, they are just beliefs. For example, the book raises the question of whether is it true that Green is not Little Blue. Lionni leaves the decision to the reader. Additionally, the beliefs we hold are molded by the information we have. Once the parents hugged the other color and witnessed what happened, they understand better. The acquisition of new information can have an impact on what we think and can change our beliefs.

The formation of Little Green raises questions about what things are made up of. Metaphysics, the study of the nature of reality, deals with this issue of material constitution. Philosophers are divided in their views on this topic. Some believe that parts are more important than the whole. I will explain this by using a simple example. When you make vegetable soup, the constituents are the vegetables and the broth. The soup is simply a different form of the two put together. This illustrates that things only change from one form to another and never go in or out of existence. This concept is known as mereology in philosophy. The alternative view is that the whole is more important than the constituents. This is illustrated by the example of mixing blue with yellow to create green. The parts cease to exist when the whole is created. Once you mix them, blue and yellow stop existing, and a new color green is created. In the story, this concept is questioned when Green is created, but Blue still feels like Blue. The story raises the question of which category the creation of green goes under but leaves the decision to the reader.

What makes Little Blue who he is? This raises questions about the fourth concept the book deals with: identity. What makes a thing what it is (its identity) can be understood by thinking of how much of it you can change before it becomes something new. This issue is dealt with in metaphysics. Philosophers have tried to understand how much a thing can change before it becomes something different. They have done this by dividing the properties of a thing into two categories: essential properties and accidental properties. Essential properties are those that, if changed, the thing is no longer the same. Accidental properties are those that can be changed without changing the nature of the thing. While most philosophers agree on this division, the disagreement arises on which properties go under each category. For instance, some people might think that the taste of an apple is an essential property. But rotten apples that don’t taste like fresh apples are still apples. Some people might think that the shape of an apple is what is essential, yet some apples are deformed and they are still apples. Therefore, while philosophers agree that the two categories exist, it is hard, if not impossible to know what property goes under which category. In the book, the color of Little Blue is what makes him ‘little blue’, but when he becomes green, he still goes to the house that Little Blue considers home. He looks different but feels the same. The story raises this question about identity but leaves the decision to the reader.

Little Blue has many friends, but his best friend is Little Yellow.

When Little Blue found Little Yellow they hugged each other happily.

When Mama and Papa Blue hugged Little Yellow, they became green, and then they realized what had happened.

Little Blue and Little Yellow were sad when their parents didn’t recognize them, and they cried big blue and yellow tears. Now think of things like vegetable soup and paint.

They cried and cried until they were all tears, and when they finally pulled themselves together, they were Little Blue and Little Yellow again.

Original questions and guidelines for philosophical discussion by Hina Jawaid and Thomas Wartenberg. Edited June 2020 by The Janet Prindle Institute for Ethics. 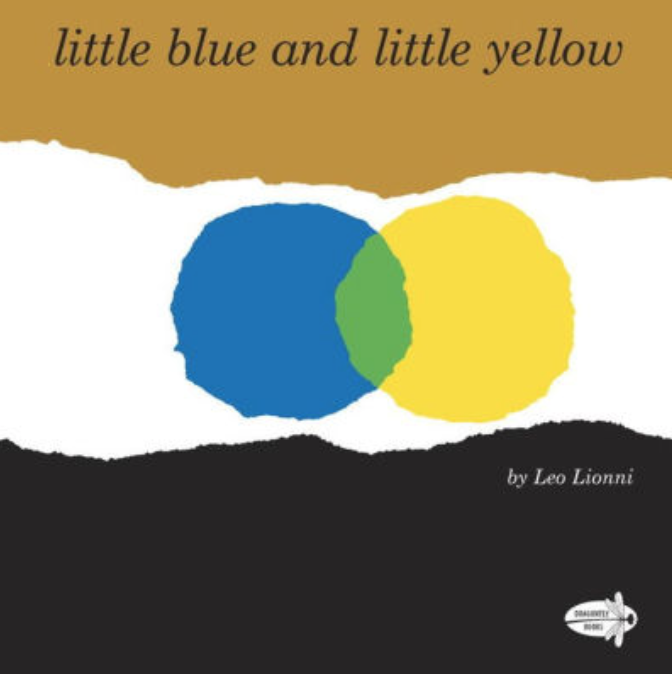