Fire Race questions our assumptions about the morality of stealing, and promotes the value of sharing and cooperation.

It is very cold and the animals of the forest have no way to keep warm. The yellow jacket sisters guard the fire on their high mountain, unwilling to share their fire with the animals. How will the animals stay warm? Will they steal the fire or freeze?

This story comes from Native American culture. There are many Native American tribes, and each tribe has many stories that have been told since long ago to teach important lessons. Fire Race is a story based on Karuk Indian folklore. It raises critical issues in ethics and political philosophy. In the story, three bees, the Yellow Jacket Sisters, have fire and will not share it. The animal community is in danger of freezing to death, so the animals steal fire from the bees to survive the winter. This story raises the ethical issue of whether the end justifies the means.

Ethics is the field of philosophy concerned with human behavior. Some ethicists hold that certain types of action are simply wrong because they violate moral rules. According to such theorists, stealing is wrong, so the animals acted immorally when they stole the fire.

Philosophers who contend nothing (including stealing) is inherently good or evil would argue that the rightness of an action depends on its consequences. On this view, the action that leads to the highest increase in welfare is the right one to do. Because this was a life or death situation for the animals, but the bees’ lives were not threatened as a result of the theft, it was not morally wrong for the animals to steal the fire.

The story thus presents an interesting case for thinking about which moral theory is valid. In addition, it raises the question of whether a person can be blamed for doing something that is morally wrong. If a mother, for example, has starving children and she has the opportunity to acquire food but only by stealing, is she still blameworthy when she steals? One possibility is that she is not culpable under the circumstances. Another possibility is that there are degrees of blameworthiness, and in this case the mother would not be held to a high degree of accountability. In this sense, one could say that the animals are wrong for stealing fire, but it was understandable under the circumstances, such that they are not held as accountable as they otherwise would be.

Another issue raised in Fire Race is cooperation. The animals cooperate in the story–but to what end? They work together for the survival of their community on one hand but steal to do it on the other hand. The philosopher Bertrand Russell said, “The only thing that will redeem mankind is cooperation.” Indeed, in social philosophy working toward a common vision/goal is the essence of a productive community. Still, the question of whose vision is being worked toward calls inclusion and marginalization into question. In Fire Race, one may argue that the bees represent tyrannical authority, greedily controlling resources. From this view, the animals are an oppressed population that becomes empowered through cooperative resistance. One could also argue that the animals’ cooperation is akin to mutiny or organized crime. Was this instance of cooperation heroic or iniquitous?

When the bees choose not to sacrifice their comfort for the good of the animals, the book suggests, “They are wicked and will not share.”

When coyote says, “Cooperate and work together, we can steal the fire,” is this cooperation to do something good or bad?

Other stories, like Robin Hood, portray the thief as the hero. The animals stole fire from the bees so they wouldn’t freeze. Is it always wrong to steal? 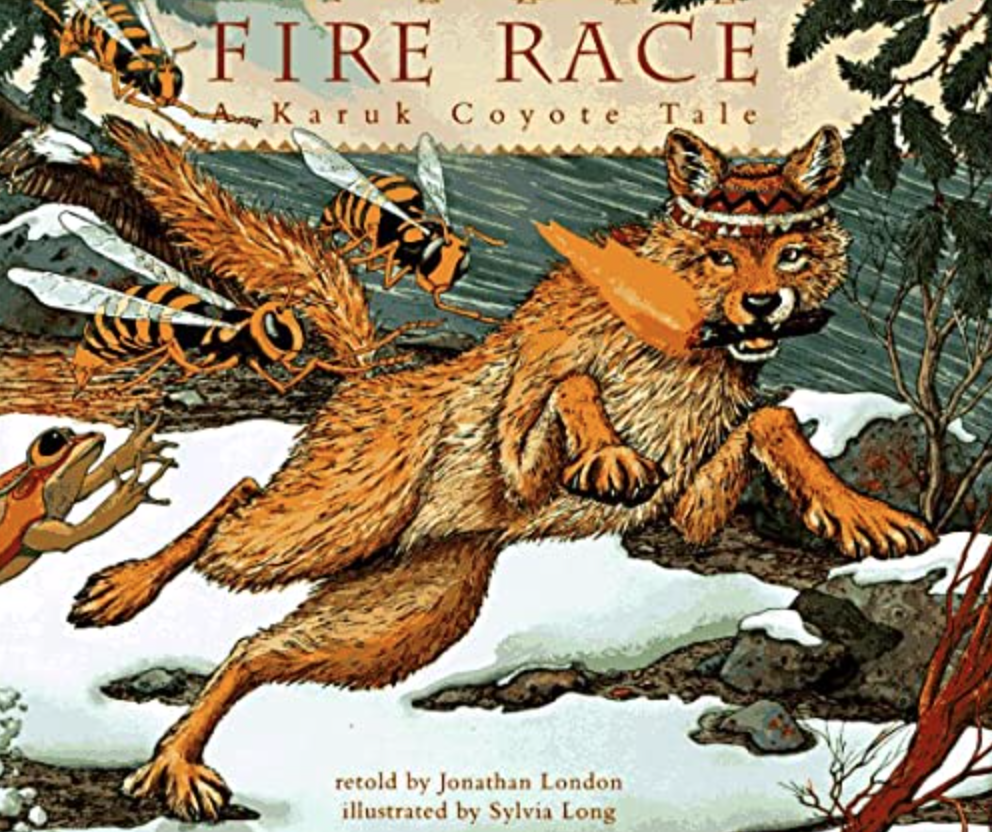