Emily’s Art explores questions of aesthetics and introduces the difference between subjective and objective judgments.

When her teacher announces an art contest, Emily wonders how the judge will know what painting is the best. When the judge likes Emily’s painting when she thinks it’s a rabbit but rejects it when she realizes it’s really a picture of a dog, Emily stops painting in sadness. Before long, though, Emily’s classmates, teacher, and Emily herself realize that “best” can rarely be measured or judged.

Emily’s Art by Peter Catalanotto is an important children’s book because it raises questions that include: What is art? Who is an artist? What criteria should be used to judge good art? How is art created? How is art viewed and interpreted?

In the prologue of the book, there is a conversation between the teacher, Ms. Fair, and her students. The first philosophical question set comes from this part of the book and addresses contests and subjectivity versus objectivity. The questions allow the students to discuss the differences between subjective things and objective things while comparing an art contest and a science fair. With a science fair, participants have to include a hypothesis, an experimental methods section, along with results and conclusion sections. By comparison, art contests typically don’t have quantitative criteria for judging. Because there more concrete criteria in a science fair, it is easier to judge, and not much opinion or emotion is involved. An art contest is difficult to judge because it deals with perception, interpretation, personal biases against subject matter, and expression.

The next set of questions explores the aesthetics of philosophy by discussing the definition of art, how to determine if Emily is making art, and if she’s an artist. The philosophical question has been a debate for modern-day philosophers and historical philosophers alike. With these questions, a conversation can be generated to discuss whether things like music, dancing, and singing are considered art. Is a blue square on a piece of paper artwork? Does art have to be man-made? Who gets to decide whether or not something is art? Further, what makes an artist? Must one be famous to be considered a “real” artist? If I say that I am an artist, does that mean that I am? If not, then what would I have to do to really be considered an artist?

The third and fourth question sets discuss the issue of judging in “Emily’s Art.” Moral philosophy is brought into question when the children debate whether or not the judging was fair in this book. The judge of the art contest makes the declaration that she is the judge because her cousin is married to an artist. This is not a necessary or sufficient reason for being the judge of an art contest. It doesn‘t matter who her cousin is married to; marital status doesn’t illustrate what kind of knowledge the judge has about art. This declaration brings up the issues of how a judge should be chosen, and also what kind of artwork should win a contest. The judge shouldn’t use her own prejudices against the subject matter to determine the ‘best’ painting. How should one judge artwork – is there ever a fair way to judge, or will bias always be involved?

The fifth question set discusses the meaning of the phrase “to hurt someone’s heart.” When Emily says this to the nurse, was she being literal or metaphoric? At this point, the students can go around in a circle and talk briefly about times that they can remember their heart hurting. What does it mean to have your heart be hurt? What was really going on with Emily, and why did her heart hurt? Is it worst to have your heart hurt or to hurt another part of your body like your leg? What are the differences between these two pains, and how does the ‘healing’ process differ?

The final philosophical topic allows the students to explore the issue of the artist’s intention versus the viewer’s interpretation. When the judge thinks Emily’s painting is of a rabbit, she thinks Emily’s painting is the best. When she is told Emily’s painting is really of a dog, which the judge fears, she chooses another painting as the best. One of the wonderful aspects of art is that it is hard to define, and another is that it will never be viewed or interpreted the same way twice. Art does not have to be interpreted exactly as the artist intended it. Also, maybe an artist shouldn’t even have an intention. One thought about art is that it is the product of emotional exploration. If this is true, then the artist cannot work on a piece with a final product in mind. Otherwise, it would not be true art, according to some philosophers. This story raises many important philosophical issues about art, and these issues should be discussed.

The nature of contests

In this story, Emily’s school has an art contest, and the students discuss different kinds of competitions.

In this story, Emily’s artwork is not chosen as the winner of the art contest.

In one of Emily’s paintings, she has four mothers. She said it was because her mother is so busy in the morning.

Who gets to judge?

In order for a winner to be chosen in the art contest, there has to be a judge. The judge in Emily’s Art is the principal’s mother. The judge says, “My cousin is married to an artist.” That’s why she’s the judge.

The nature of feelings

Emily goes to the nurse when she’s not feeling well. The nurse asks her what’s wrong.

The nature interpretation of art

The judge loved Emily’s picture when she thought it was a rabbit, but when Emily’s teacher told the judge it was a dog, she changed her mind and chose another picture.

Original questions and guidelines for philosophical discussion by Kate Vigour, revised by Lindsay Kurahara. Edited June 2020 by The Janet Prindle Institute for Ethics.

Have the students make a drawing like Emily that expresses their feelings about something. 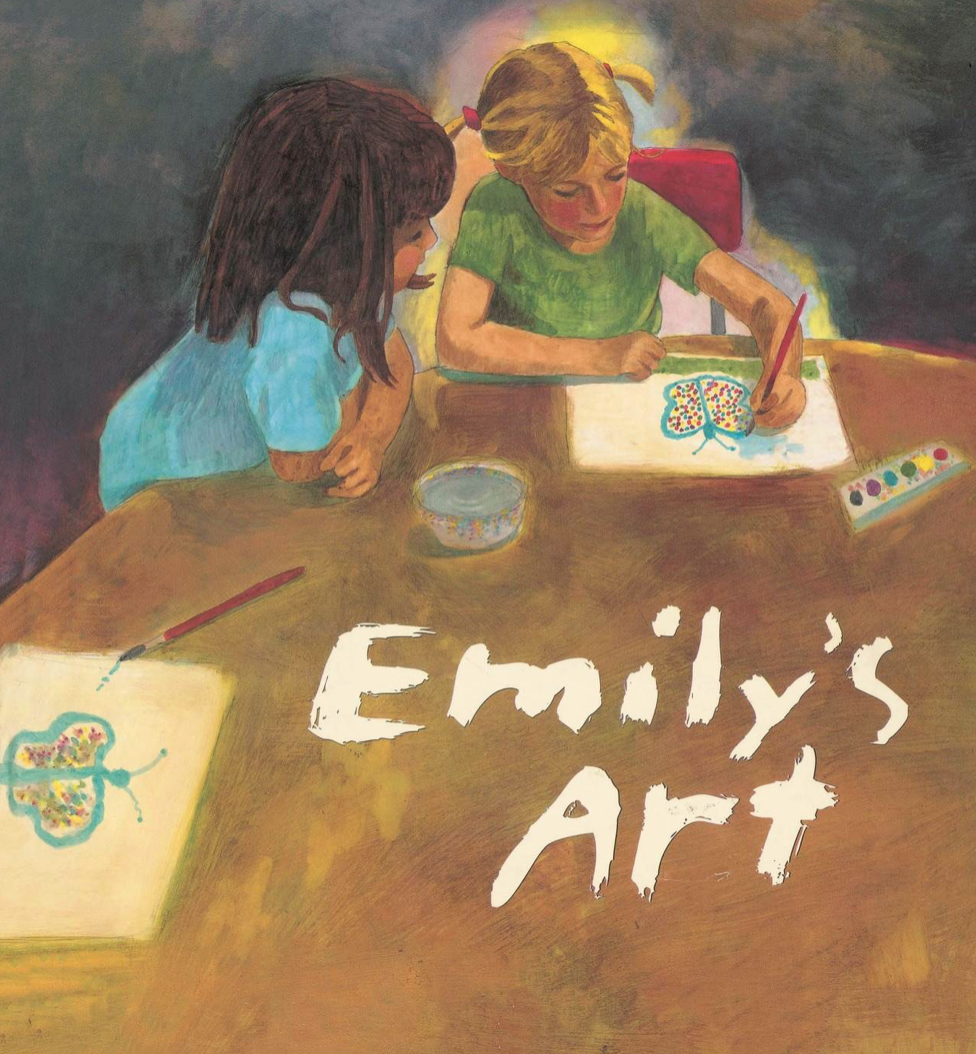