First People’s village sits at the foot of a mountain. All of a sudden, a fire consumes the mountain! Who will help put out the fire before it reaches the village? As the fire comes dangerously close, First Woman asks all the animals to help. But who can bring enough water to put out the whole mountain, and how will they do it? The animals and people have some serious problem solving to do.

Frog Brings Rain is a retelling of a Navajo folktale. While depicting the origins of rain, this story touches upon topics debated in ethics. A fire blazes on a mountain, and it is headed right for the village. “First Woman” asks various animals to help put out the fire. Some refuse, and some attempt to put out the fire and fail. Finally, Crane and Frog cooperate to put out the fire, and the village is saved. Frog Brings Rain offers a unique perspective in terms of questions regarding moral consideration of animals and bravery.

Speciesism is the notion that when humans view themselves as more valuable than other species, they practice a kind of prejudice that presents humans as the superior species and operates in a similar manner as classism, racism, and sexism. A different view is that humans are naturally superior to animals by virtue of rational capacities. Some with this view believe that by virtue of distinctly human capacities, we are responsible for being stewards of the environment and protecting animals. Others who view humans as superior to animals hold that animals’ lack of moral capacity means they have no moral worth, and therefore it is not morally wrong to dominate animals. The view put forth in Frog Brings Rain suggests that humans and animals are equals. In fact, the animals in this story come to the aid of the people by utilizing distinctly non-human capacities (natural flight, etc.). To this end, it may be argued that the animals in this story display superiority to humans.

Frog Brings Rain demonstrates two possible ways of interpreting bravery. One interpretation is possible when a small bird gets burned, trying to put out the fire on the mountain. First Woman calls him “brave.” What are the properties of bravery used as criteria for determining the bird is brave? It could be facing danger; it could be facing fear, perhaps going against the odds, or going against the grain and offering to contribute when others refused. Of all these qualities of bravery, are any necessary? Bravery can arguably be demonstrated without any one of these qualities.

A different way in which animals in Frog Brings Rain can be viewed as brave is in terms of standing their ground when they were asked to do something they felt was too dangerous to do. Perhaps the animals that refused to bring water to the mountain demonstrate bravery by staying behind to protect their homes and families. Frog Brings Rain offers a way to understand the essence of bravery from many angles.

Frog and Crane put out the fire on the mountain.

Three birds refuse to bring water. Robin Redbreast agrees, but gets burned trying, and fails to put out the fire because there wasn’t enough water. After, First Woman says, “You are brave. We will call you Tsidii Biteel Halchi’I, Robin Redbreast”

All the other animals had reasons for not bringing water. Nighthawk said he would hurt his eyes, and Beaver said he would lose his home. 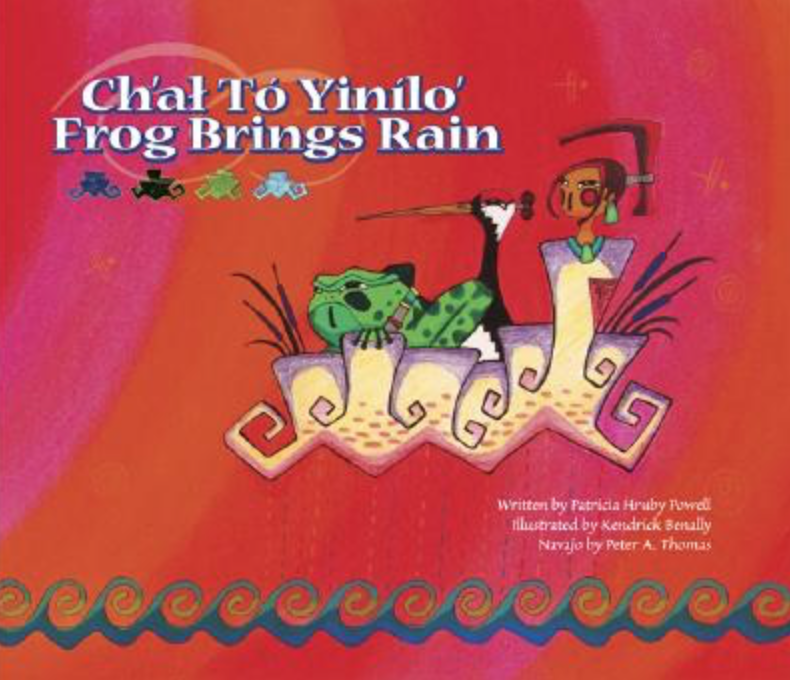