Bird is a fairly mature story exploring subjects of aesthetics, death and religion, and drug addiction.

Bird is the story of Mehkai, nicknamed Bird by his grandfather. Bird’s experiences are captured in his drawings – some of which are realistic representations of his surroundings, while others speak to Bird’s deepest hopes and desires. Bird’s life takes a downward turn when he loses his brother to drug addiction and shortly after his grandfather – a situation which forces him to look to his spiritually to find peace in his pain.

Bird addresses several philosophical ideas. Those ideas include, but are not limited to aesthetics/metaphysics (art and reality), religion, death and disappointment (doctrine of double effect/death as a process), and ethics (addiction). Bird speaks to the Black experience through the eyes of a child. “Bird’s” life is defined by his associations and interactions with his family and city life, which he translates into art. His translations reflect not only his emotions but also his desires, hopes, and fears. The author and illustrator are careful to use language and imagery to express Bird’s struggle with the transitory yet stagnant nature of Black life in the inner city.

Aesthetics is a field within philosophy that is concerned with the senses, most notably art and how art is judged. On Bird’s wall, we see his art: urban footwear that appear to be men’s shoes from different generation of wearers, a bird, men of the street, and a church. Bird’s drawings differ between those that reflect a “realistic” representation of his surroundings and those that project an imagined reality – the way Bird would like things to be. Philosophers differ on what constitutes art. Some believe that defining art should be left up to the viewer and the emotions it evokes; others argue that art is defined by the creation process; while some believe that the function of a thing defines it as art, yet some hold to the standard that the art should be a true reflection of society. The art displayed in the book calls all these differing arguments to question regarding what constitutes art. Is Bird’s grandfather correct when he says that his brother’s graffiti is not art? Is all art found in a museum? What about how Bird feels about his brother’s art – should this be considered when thinking about art? If we define art as specific to its function, what is the function of Bird’s art versus that of his brother?

Interestingly, all the images of Bird and his family are done in vivid rich colors while his surroundings, even his drawings, are primarily done in black and white or shades of gray. This contrast can be used to prompt discussion about how representation might change with the subject matter. The discussion leader might choose to delve further into how Bird’s drawings explore the nature and purpose of art – when, where, and why Bird’s drawings are projecting his hopes instead of the reality of his life and relationship with his family. This question set can explore whether or not Bird’s drawings help to get him through bad times, or whether they are merely escapist. Is Bird’s escape through his art/imagination, where things are the way he wants them to be (his brother drug-free, his granddad alive), helping or not? And what is the purpose of the different pieces of art?

The two philosophical issues concerning religion involve the existence of Heaven and the nature of death. The fact that Bird begins and ends on a religious theme is significant to the story. It should be one of the areas focused on during any philosophical discussion – birds are of great significance in both West African spiritual traditions and Judeo-Christian religious traditions, both of which place great emphasis on flight and the ability to return people to their original place on existence.

The image of Bird’s drawing on the opening pages of a church is symbolic of the Black community’s relationship to religion and spirituality and how it influences Bird’s interpretation of reality. If this is how Bird’s reality (and that of the Black community) is informed, is it fair to say that his drawings are imagined or fictional, and not based in reality? How is reality defined for different people? If others in society do not believe your beliefs, does that make them less legitimate?

Bird tries to fix his brother by drawing images of him as his “old self,” but finds that he is unable to do so. How does this reflect society’s view of drug addiction? Should drug addiction be treated as a crime handled by the criminal justice system, or should it be seen as a matter of public health and understood as something that affects entire communities? Some philosophers argue that addiction is not a disease or illness and is largely linked to one’s free will and moral responsibility. Consequently, we cannot “fix” addicts, but we can punish them to show that the decisions made of their own “free will” are morally wrong. Others argue that free will is determined by a specific set of conditions of access – where some have access to favorable conditions that make it easier to exercise their free will in a morally just way, others don’t. The children can consider these philosophical perspectives when answering the following: how can we evaluate the choices that Marcus made? Could the family have done anything to save Marcus? What obstacles could have prevented Marcus from making different choices? What obstacles exist to prevent Black men from exercising their morally justified free will? Though the book does not focus on the justice system and addiction, we can ask such questions as, “What is justice? Is justice in American society defined to the disadvantage of Black males in our society?”

Bird says, “That’s what I like about drawing – you can fix stuff that’s messed up just by using your imagination or rubbing your eraser over the page.”

Bird remembers when Uncle Son said he thought Granddad went to Heaven to keep his eye on Marcus.

Original questions and guidelines for philosophical discussion by Nicole Hylton. Edited June 2020 by The Janet Prindle Institute for Ethics. 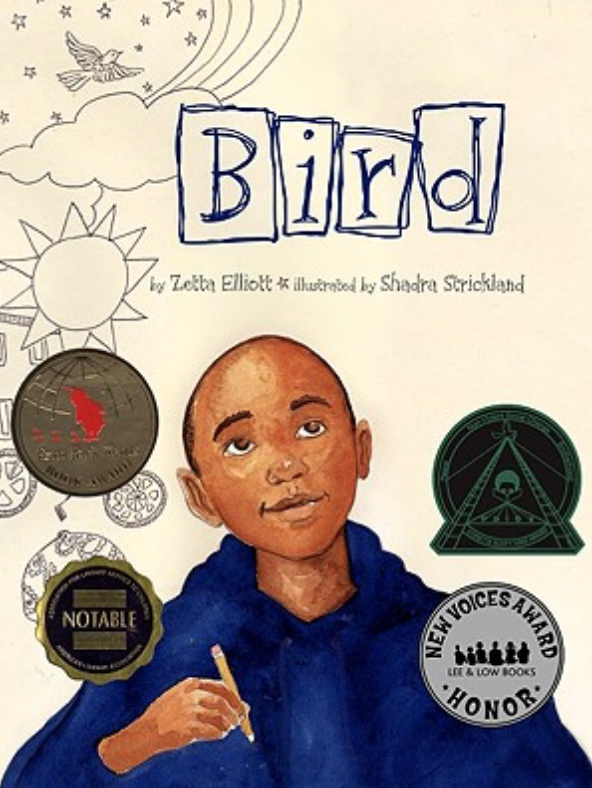