A same-sex penguin couple hatches an egg of their very own, offering questions about family structure, freedom, and identity.

And Tango Makes Three depicts the true life story of Roy and Silo, two chinstrap penguins who reside at the Central Park Zoo. One day Mr. Gramzay, their keeper, notices the penguins’ attempts at hatching a rock. Why not just hatch an egg? Because both Roy and Silo are male. Mr. Gramzay then provides them with a fertile egg and a chance to become a family. When the egg hatches, they name the chick Tango because “it takes two to make a Tango.”

And Tango Makes Three is a book that focuses on contemporary philosophical issues, three of which are addressed here: What constitutes a family? Is there an ethical dilemma regarding zoos? Is there a way to understand what makes a person a unique individual?

Throughout history, the idea of the family has changed. At one time, a family consisted of an entire clan of related people. Over centuries that definition has come to mean less a bloodline and more a nuclear family, which is traditionally taken to be a romantically linked heterosexual couple and their offspring. However, as a result of LGBT+ rights movements, the idea of the family is shifting again. This module will attempt to determine what it is that explicitly defines a family. Where does a non-traditional family, such as homosexual parents or adopted children, fit in? Does a family require that its members be biologically related? Ideally, one thinks of family as being connected and defined by love. In this case, what about three friends that live together and care about each other–are they a family? Is it even required for a family to live together?

In addition to the family unit, we can think about a broader philosophical issue: the ethics of zoos and, ultimately, the scope of freedom. The story talks about how families go to visit the Central Park Zoo for enjoyment. Is it fair to the animals to be kept in confinement all day long? In some cases, zoos exist to help preserve and rejuvenate endangered species. How does that fact affect the morality of the animals’ confinement? Wild animals manage to survive and procreate without human interference. Should they all be subject to captivity in zoos, or are they entitled to their own freedom? Because animals cannot consent to living in zoos, is it fair to assume that they would prefer a lifestyle in which their basic needs are easily fulfilled? Does the fact that human beings enjoy seeing animals in zoos justify animals’ captivity? This discussion questions whether humans have the right to continue to keep animals in zoos, or whether animals are entitled to their own freedom.

Finally, And Tango Makes Three addresses the question of individuality in its afterword. We all wonder what distinguishes us from everyone else. Tango has two dads. Is this fact essential to identify Tango as Tango? A student may think that the best way, if not the only way, to tell himself apart from another student is through physical characteristics: gender, hairstyle, or skin color. Is there a way to distinguish you from someone else in more than physical terms? For example, one rock is different from another identical-looking rock even though they share their physical characteristics. They were not formed in the exact same process, nor do they occupy the same space. Are historical differences enough evidence to account for our individuality? Identical twins would not share identical life experiences, but is that all it takes to distinguish one from the other, or is it something else? What could that something else be?

The Nature of the Family

And all the children who came to the zoo could see Tango and her two fathers playing in the penguin house with the other penguins.

There are forty-two chinstrap penguins in the Central Park Zoo and over ten million chinstraps in the world. But there is only one Tango. 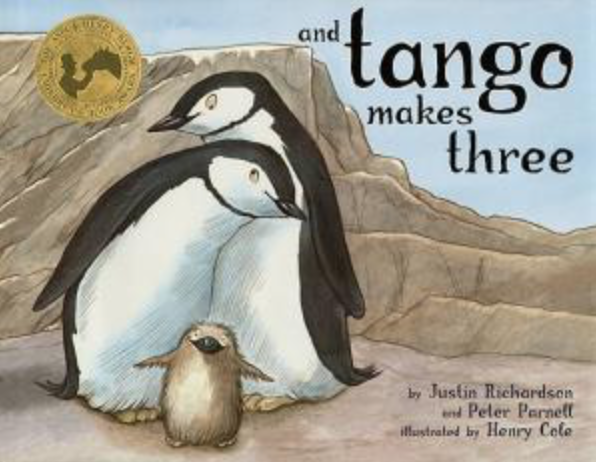