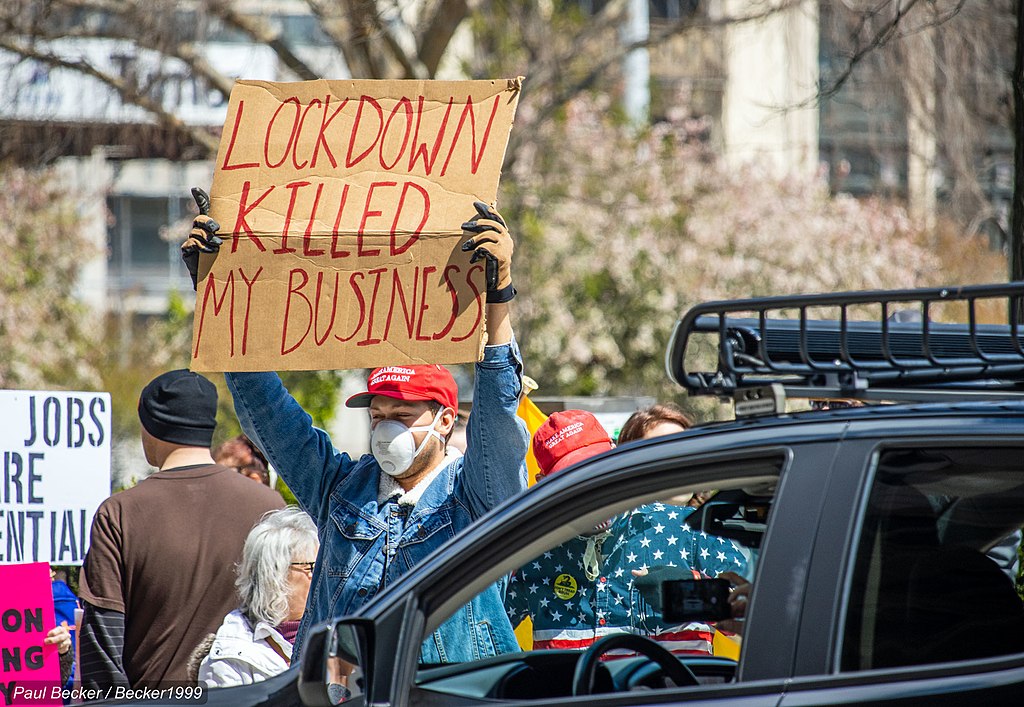 In the opening days of May, health care workers reported nearly 100,000 new cases of COVID-19 in the United States; in that same time, several thousand patients died of the disease. Nevertheless, as of May 4th, at least nine states have begun to loosen restrictions on movement in public spaces placed in response to the coronavirus outbreak, reopening beaches, restaurants, gyms, and other “nonessential” businesses.

As shouted by protestors from Arizona to Wisconsin to the White House, one explanation for rolling back the pandemic response, despite the spread of the pandemic itself showing no signs of slowing, is that “the cure cannot be worse than the disease.” Since March, more than 30 million Americans have filed for unemployment and these numbers indicate only a fraction of the economic fallout from the enforced quarantines. Thus far, almost no industry—from entertainment, to higher education, to oil production, and more—has escaped unaffected and, particularly with the globe teetering on the edge of a recession, it is far from clear what sort of long-term consequences of the shutdown lie ahead.

Certainly, with their tendency towards ultra-militarized displays of aggression and their often-explicitly racist messaging,  there is much that is inexcusable about many lockdown protests, but when CNN’s Don Lemon says that people unhappy with the lockdowns just “want a haircut” or “want to go play golf,” he seems to be unfairly painting all complaints about the shutdowns as if they are as ignorant as those clearly silly concerns. A “nonessential” locally-owned art gallery or specialty construction company forced to close to prevent the spread of the disease might, nevertheless, feel terribly “essential” to the people whose livelihoods depend on those businesses being open.

Of course, medical experts agree that easing “social distancing” restrictions at this point is premature and could very well lead to an even more serious spread of the virus. The moral calculation of “millions going bankrupt” against “tens of thousands dying” is not a problem I – or, indeed, anyone – could hope to easily solve. Both of these outcomes are clearly unacceptable and most policymakers around the world seem to be trying to chart a course between Scylla and Charybdis that keeps both threats as low as possible, simultaneously. But conversations about the pandemic seem to typically prioritize only one of these two political concerns (“saving citizens’ livelihoods” vs. “saving citizens’ lives”) at a time.

Much has been said recently (including by me) about “expertise in the time of COVID-19.” Certainly, spreading pseudo- and anti-scientific information is dangerous (particularly during a pandemic) and we should think carefully about how we think about the coronavirus. Trusting experts in matters of public health and safety is a crucial part of living in a large, well-functioning society like ours—pretending otherwise, even for looming existential concerns, is simply irresponsible. But, particularly for people whose exposure to the pandemic has been primarily economic—such as those citizens in less-populated states where the spread of the virus has thankfully been less severe—it can be understandably off-putting to have your most salient personal political concerns belittled (or even morally condemned) for the sake of other political concerns, no matter how objectively important both sets of concerns may be. To denigrate your perspective for the sake of “listening to the experts” (when the perspective of those experts is simply orthogonal to your concerns) might well only serve to provoke a backfire effect that leads primarily to greater levels of frustration at the experts being touted and suspicion of the information they share.

This, I take it, was one thing that the philosopher Hannah Arendt was concerned to avoid by her treatment of politics not simply as a process of governmental operations, but as “the place and activity of shared communication based on the distinct perspectives of equal human beings.” Rather than treat politics or political decision-making as an activity properly performed by specially-trained experts, Arendt argued that wherever people gather together “in the manner of speech and action,” they create a community with power to accomplish their political purposes. In her book, The Human Condition, Arendt explains how the development and preservation of public spaces wherein we can politically engage with each other is both a fundamental element of the human experience and a necessary precondition for civic freedom. Importantly, by “public space” Arendt does not just mean physical locations, but rather the realm of discourse wherein perspectives and concerns can be expressed, challenged, debated, and legitimated. When governments seek to restrict and restrain these sociological structures, they begin to take what she calls a “totalitarian” form, thereby precipitating all manner of further oppressions and human rights abuses (on this, see her The Origins of Totalitarianism).

Just to be clear: I do not mean to suggest that Arendt would necessarily be opposed to a mandated lockdown to prevent the spread of COVID-19 (and I certainly do not mean that Dr. Fauci or other healthcare workers are totalitarian oppressors!). Of course, Arendt held no principled animus against experts as such; she simply recognized that their expertise would have to be shared within the public space wherein others would be able to respond. Artificially constraining the operation of that public space—even for demonstrably moral purposes—is a necessarily troublesome notion. And from the perspective of people concerned about the dire economic consequences of the lockdown, forcing a conversational shift to a discussion of mortality rates and other healthcare issues might come off as just such a constraining move.

So, I think that Arendt’s realistic analysis of how our perspectives shape our participation in political structures can help to explain some of the curious disagreements about the response to the coronavirus pandemic, as well as the all-too-common tension in conversations about what we should do next. The clash of perspectives over what is “clearly the right thing to do” cannot simply be resolved with reference to a particular statistic (economic or scientific), but requires the sort of free speech and effortful conversation that Arendt considered fundamental to the human condition.

(I also want to note: I sorely wish that Arendt could respond to President Trump’s widely rejected assertion that “When somebody’s the president of the United States, the authority is total,” but that’s a different conversation!)