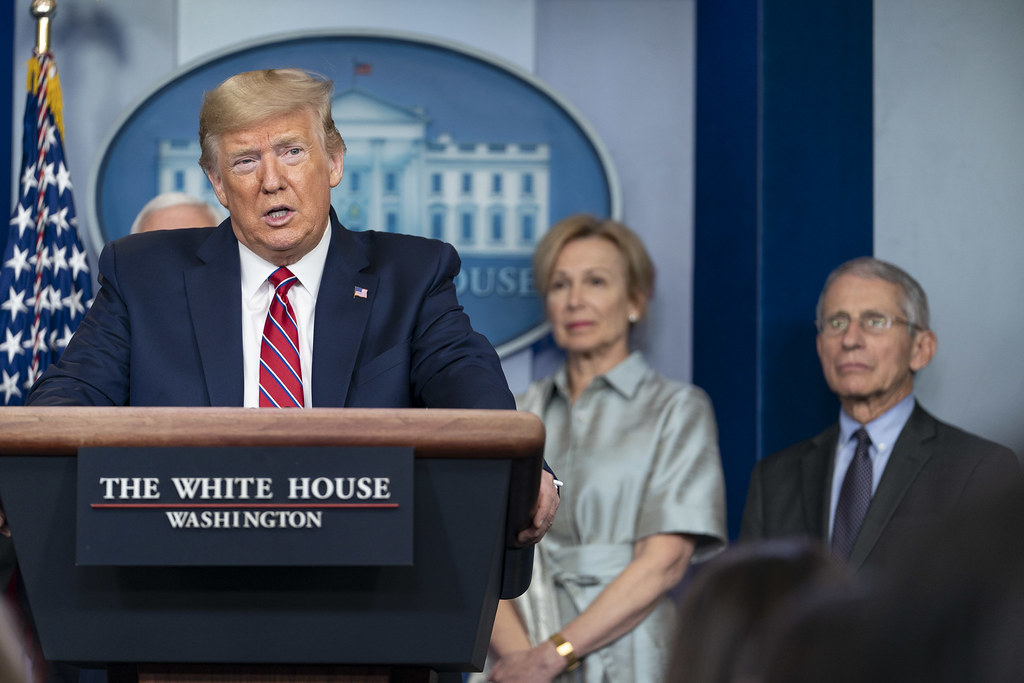 First, it was hydroxychloroquine, which Trump touted as the supposedly miracle cure for the coronavirus. In the weeks since, however, research has suggested that there is little reason to think that the antimalarial drug has any effect on the coronavirus whatsoever, and may in fact be actively harmful instead. Not deterred by a lack of any kind of expertise, knowledge, or common sense, Trump has most recently suggested that ultraviolet light or disinfectants may be a fruitful area of research in combatting the pandemic. With regards to the potential for ultraviolet light, Trump stated:

“And then I said, supposing you brought the light inside of the body, which you can do either through the skin or in some other way. And I think you said you’re going to test that too. Sounds interesting.”

And with regards to disinfectants:

“And then I see the disinfectant where it knocks it out in a minute. One minute. And is there a way we can do something like that, by injection inside or almost a cleaning?”

As many news outlets, scientists, and people who have thought about the implications of Trump’s proposals for more than one second have reported, injecting disinfectant is a terrible idea, and while it may cure you of coronavirus, it will only do so by way of having killed you.

Presuming that Trump’s motivations are not, in fact, to recommend to Americans that they commit involuntary suicide, why on earth would he suggest treatment options that are so obviously and blatantly harmful?

If advice to consume something potentially harmful as a miracle cure sounds familiar, it is because it has been a staple in various pseudoscientific communities for a long time. As a rough characterization, we can call a set of beliefs or a practice pseudoscientific if they purport to be scientific, but are not, in fact, supported by any kind of scientific justification or evidence. You have no doubt come across pseudoscience in various forms: homeopathy, for example, is considered by a considerable number of people to be “good science,” despite there being overwhelming evidence that it is a potentially dangerous approach to illness that has zero empirical support.

While pseudoscience at least purports to be scientific, other recent proposed miracle cures for coronavirus would be better categorized as antiscience. Antiscience has been defined as “the outright rejection of the time-tested methods of science as a means of producing valid and useful knowledge,” and can be found in many different approaches to treatments of mental or physical conditions. For example, consuming some quantity of bleach has been proposed by some groups as a treatment for conditions ranging from autism, cancer, HIV/Aids, and malaria. Described as a “miracle mineral solution” or “MMS,” it has also been proposed by these groups as a cure for coronavirus.

That such views are not simply pseudoscientific but distinctly antiscientific is evidenced by the justification that those who are proposing such views provide for them. For instance, when asked to defend their claims that consuming MMS would cure coronavirus despite lacking even a tangential relationship with science, the head of one the group proposing the treatment stated that “the FDA has a financial interest in this problem because it’s run by people in the pharmaceutical industry.” The basis for the claims, then, is not that they are supported by science, but rather that science itself is not to be trusted, and so we need to look elsewhere.

Should we classify Trump’s remarks as pseudoscience, or antiscience? While he has a lengthy track record of ignoring, attacking, or contradicting scientific experts, Trump’s suggestion that scientists look into the possibility of injecting disinfectant for treatment would appear not to necessarily be a rejection of science as a trustworthy enterprise, but rather an amateurish attempt at science itself. The reasoning is perhaps something like the following: if there is evidence that UV light and disinfectants will kill the coronavirus on an external surface, it stands to reason that it will work internally, as well.

Part of what makes these remarks so dangerous is not only that it is coming from a source that many find trustworthy, but that its similarity to the kind of treatments proposed by antiscientific groups will no doubt make it appealing to members of those groups, as well. Bad, pseudoscientific reasoning that also appeals to those who are skeptical of science generally is likely a recipe for disaster.

Although a federal court has recently issued an injunction against the group most prominently marketing MMS, it is much more difficult to stem the tide of misinformation when it is pouring, unfiltered, out of the mouth of the president. Indeed, those who adhere to antiscientific views will no doubt fail to be convinced by good scientific evidence that their views are incorrect. After all, if one takes the scientific enterprise to be corrupt, then there is little reason to change your view on the basis of the word of scientific experts.

That Trump has been, and continues to be, an active cause of the spread of disinformation is well-documented, and so it is hardly surprising that he is a detriment in the battle against coronavirus. And while in an ideal world his views on scientific issues would be completely ignored, that his views are both pseudoscientific and appeal to the antiscientific community means that it is undoubtedly only a matter of time until someone is seriously hurt because of Trump’s advice.