Aesop and the Unvaccinated: On Messaging and Rationality 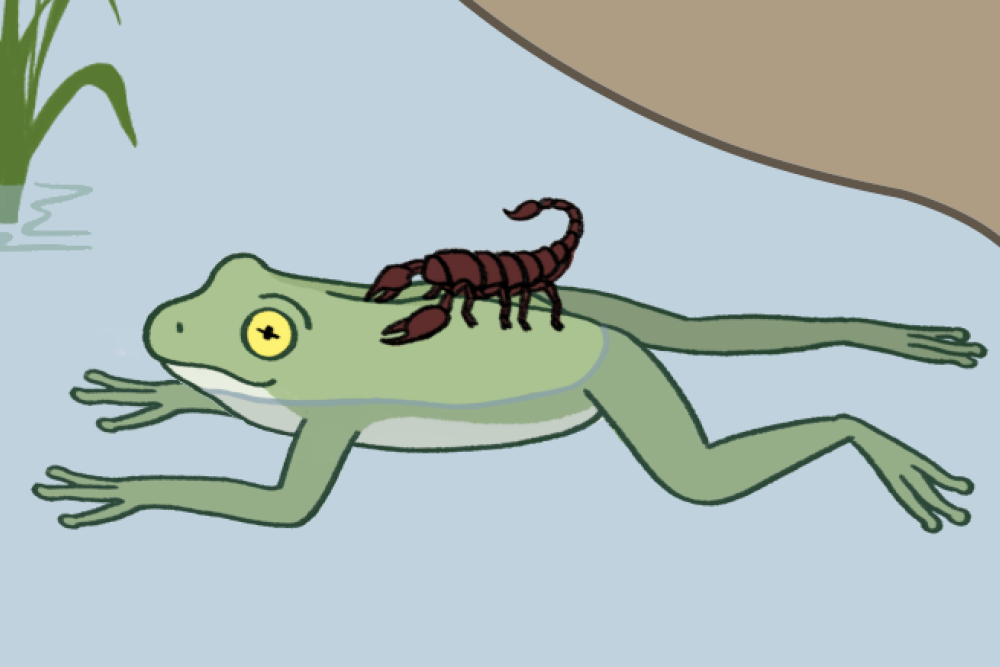 “Scorpion and the frog kurzon” by Kurzon is licensed under CC BY_SA 4.0 (via Wikipedia Commons)

Aesop shared a fable once about a scorpion and a frog. The scorpion asked a frog to ferry him across a pond. The frog was reluctant because he feared the scorpion’s sting. But the scorpion appealed to the frog’s intellect and pointed out that if he did sting the frog, the scorpion would surely drown as well. So, the frog agreed to the request. But, as expected, about halfway across the pond, the frog felt an awful pain and before they both died, asked the scorpion why. The scorpion replied that he really couldn’t help it saying, “it’s in my nature to sting.”

As of this writing, about 50% of the U.S. population is vaccinated. Since it is estimated that between 70% and 90 % of the population will need to be vaccinated against the COVID-19 virus to reach herd immunity, we have a long way to go. But the vaccination rate overall has slowed significantly. We watched the vaccination rate begin to plateau in late June and early July, at about the same time that the more deadly Delta variant began to ravage the unvaccinated. Now, with new cases rising each day across the country, one wonders why anyone would put off getting the vaccine.

Explanations for this phenomenon abound; some believe that vaccine hesitancy is to blame. Early on in the rollout of the three major vaccines available in the U.S., many were “hesitant” because they wanted more information about the vaccines. Were the vaccines safe? If so, like most medications, they probably were not safe for everyone, so for whom were the vaccines not safe? Where would people go to get the vaccines? What costs would be involved? These are rational questions the population was asking; they may have been gathering facts to make rational decisions. Or were they?

Humans aren’t really known for our ability to be consistent when it comes to making rational decisions. Some of those same people get flu shots every fall and make sure their children receive needed vaccinations as infants and again prior to the start of school, still don’t want to take the COVID vaccine. All despite the fact approximately 99% of deaths in America due to COVID are found among those unvaccinated. It seems irrational not to avail oneself of this life-saving intervention.

Even some government officials — in those areas where the vaccination rate is low, and the spread of the variant is high — are growing more outspoken about their constituents’ health decisions. Senate minority leader, Mitch McConnell (R-KY), has reiterated in public that for those who can be vaccinated to do so. (His state, Kentucky, has a lower-than-average vaccination rate.) The Governor of Alabama, Kay Ivy, recently said that this is now an epidemic of the unvaccinated in her state, further stating that you just can’t teach “common sense.”

But alongside these pleas are plenty of name-calling, finger-pointing, and blaming — all of which may be smokescreens for the fact that we don’t really know how to message the vaccine’s appeal to remaining holdouts. We continue to assume that humans are consistent in making rational choices, and when we believe they have not done so, we have a tendency to throw up our hands. We think that stupid decisions are made by stupid people. The truth, however, is that we aren’t consistent in making rational choices; irrationality abounds, and it has nothing to do with stupid. The same people who buy lottery tickets also buy insurance. Why? Cognitive science and the felicific calculus of Jeremy Bentham may both give us a peek into why we make decisions as we do, whether they are rational ones or not.

In the 18th century, Bentham formulated the “felicific calculus” which stated that an event can be assigned a value (typically numeric) as to its utility or worth. That worth was measured in terms of the amount of happiness or pleasure the event would bring people; the more happiness, the better the decision that caused it, and the more rational it would be seen. This mathematical algorithm measured pleasure or pain in terms of several facets; among them were the pleasure or pain’s intensity, its duration, the probability of its occurrence (and reoccurrence), and the number of people affected. While being mathematically sound, philosophically appealing in many ways, and rational, for most day-to-day decisions the calculus was impractical. Adapting a thought experiment originally posed by cognitive scientist/mathematician Amos Tversky however, may help us understand from a cognitive perspective why people are so inconsistent when making decisions.

Example 1. Let’s say that your local health department has projected that 600 people will get the Delta variant of COVID-19 in your hometown of 6,000 people.

There is a proposed treatment, A, and if applied it will save 200 people.

There is another proposed treatment, B, and if applied, there will be 1 chance in 3 that 600 people will be saved, and 2 chances in 3, that no one will be saved.

Which treatment would you choose?

When presented with the original problem, most people chose treatment A where there is a surety that 200 people will live.

Example 2. Now, let’s say that the health department again predicts that 600 people in your hometown of 6,000 will get the Delta variant of COVID-19.

There are 2 treatments, A and B.

If treatment A is applied, 400 people will die.

Which treatment would you choose?

When presented with the original problem, most people chose treatment B.

Currently, public messaging regarding vaccinations focuses on lives lost rather than the number of lives saved. If we reframe messaging to focus on lives saved (gains) instead of lives lost (losses), the application of Tversky’s thought experiment might get us over the hump and on our way to achieving herd immunity. The felicific calculus of Bentham applies as well; perhaps a mathematical algorithm makes more sense to us homo sapiens in this case. Think of the number of persons who would experience happiness and pleasure instead of pain over a long period of time, plus the freedom from worry that the Delta could re-infect us. Correctly framing the message seems to be one effective and scientific way to help people manage the inherent irrationality that comes with being human.