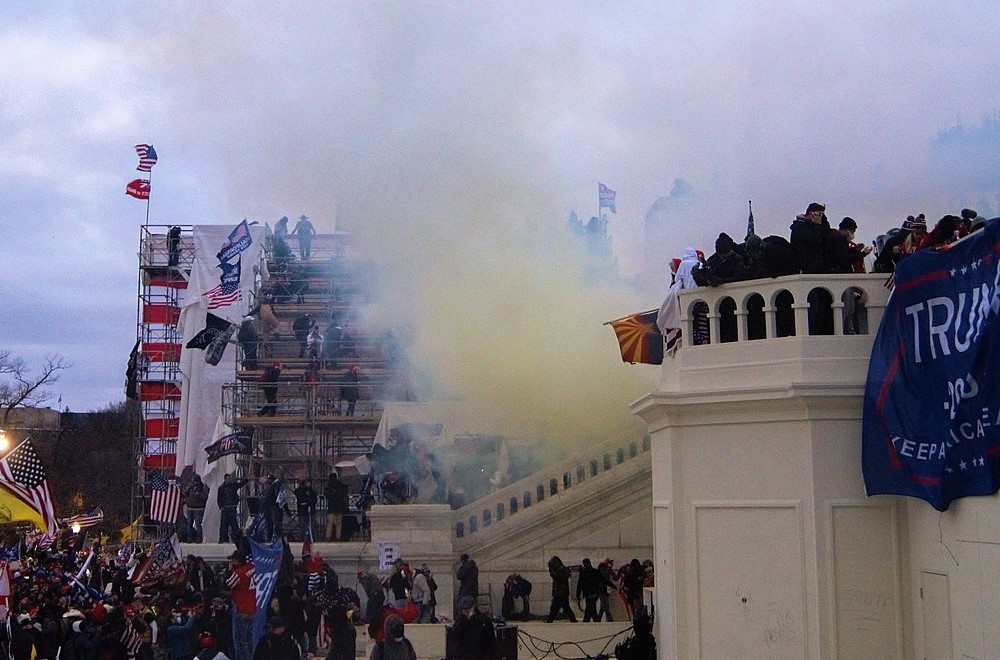 “Tear Gas outside United States Capitol” by Tyler Merbler is licensed under CC BY 2.0 (via Wikimedia Commons)

Psychologists believe that emotions — those physical reactions and expressive behaviors that accompany feelings like fear, disgust, and joy — are, in and of themselves, neither moral nor immoral, and neither ethical nor unethical. Rather, we assess the behaviors motivated by, or following from, emotions as being either healthy or unhealthy for the individual. Emotions in this sense serve as coping mechanisms (or ego defenses), and are identified as being positive or negative. When these behaviors are deemed negative, they result in unhealthy outcomes for the person.

One major research question that psychologists often face when studying emotional development asks which comes first: thinking or feeling? Does our physiological activity precede conscious awareness, or is it the other way around? The current research tends to suggest the latter; research supports the idea that cognition precedes emotion. The Schacter Two-Factor theory of emotion, states that an emotion, say anger, is recognized as the emotion of anger only after we cognitively interpret it within the immediate environment, and then cognitively label it as anger. (I might label the emotion as anger, or rage or annoyance, depending on the circumstance of the immediate environment since all three of these emotions are related. Rage, for example, is an intensification of anger (the basic emotion), while annoyance is anger, but to a much lesser degree.) While anger might lead one to act immorally, the emotion itself is not considered good or bad.

But this view that cognition precedes emotion might seem to put pressure on the idea we should regard emotions as being neither moral or immoral. For example, philosopher Martha Nussbaum believes that if emotions do have a cognitive component, then they must be taken into account when evaluating ethical judgments (intentions) made that precede behaviors. Jonathan Haidt goes even further by labeling emotions as either moral or immoral depending on how prosocial the resulting behaviors are, and if the emotion was elicited by the concern for others or strictly out of self-interest. If emotions are labeled as such, then the most recent events at the Capitol can be interpreted in this context.

On January 6, a mob stormed the U.S. Capitol building, ransacking offices of lawmakers, hunting for specific government officials, seeking to cause them harm and do physical destruction to the building itself. They were seeking to stop the official count of the Electoral College that would certify the election of a new POTUS, even if it meant that the Vice President and Speaker of the House had to be executed. It’s easy to point to this aggressive behavior as being the result of political polarization, the in-group vs out-group phenomenon, and the effects of social media on collectives. Each of these explanations refers to group behavior, collections of people who must be brought to justice. But, what role did individuals play in the fomenting of such behaviors?

Often, when individuals moralize and then find others of kindred attitudes, a moral convergence is formed. Furthermore, it is known that when the kindling of moralization and moral convergence is present, aggressive behaviors often follow, but there must be a spark to ignite the kindling. It is important to note, however, that the opposite occurs equally as often with non-violent protest groups. There the kindling is present, but there is no violent behavior by the group or any individual within the group; the igniting spark is not present in the non-violent protest group. What makes up this so-called spark? Perhaps the answer can be found by a closer inspection of immoral emotions.

Prior to the attack on the Capitol, the mob met at the Ellipse in front of the White House where the group heard emotionally charged speeches from POTUS and his attorney Rudy Giuliani for over an hour. The speeches conveyed to the group a message that the election had been rigged and stolen from their candidate, and by extension, from them. An emotion of contempt for those responsible for this supposed theft could quite reasonably have been cognitively identified by the persons making up the mob. The speech-makers used terms like “cheaters” and “liars” to generate just such an emotional response.

Anger is elicited when one sees that something is in the way of completing desired goals. If the anger is based in self-interest, then the pro-sociality of the action tendency is low, and the emotion, by definition, is immoral. The speeches were angry ones in the sense that they conveyed the idea that the perceived common goal of re-electing the sitting president was being thwarted by cheating and lying enemies of democracy. The mob was in an environment where it was easy for the individual members to experience anger and contempt as the speeches progressed. In addition, they were under the impression, according to the speech given by the sitting president, that the theft was being carried out just up the street. Anger plus anticipation most often results in aggressive behavior. The kindling was laid, and the spark that lit it came in the form of these emotion-laden speeches filled with words indicative of the emotions of anger, fear, and contempt. Giuliani’s cry for “trial by combat” coupled with these words from their president suggesting that after the count had been interrupted that they would be “the happiest people,” and that what was required was a bit of courage “because you’ll never take back our country with weakness. You have to show strength, and you have to be strong,” could very well have lit the already-present kindling. If the group saw this as a moral issue (“save your country!”), a right issue, and an issue worth fighting for, then the mob was primed to commit these violent acts. As Milgram and others showed us long ago, humans are not above inflicting harm on others as long as an authority figure encourages them to do so.

But, do the emotions experienced by the Capitol mob need to be labeled as immoral in order to explain their egregious behavior? Do we need to follow Haidt and Nussbaum in condemning the emotion and not just the resulting act? Emotions serve as coping strategies or ego defense mechanisms that motivate behavioral responses. The coping strategies used to deal with their conflicting emotions, and the ego defensive behaviors exhibited by the mob can be explained more parsimoniously by the cognitive theory of emotion: there is an emotion present, anger, (but what to do about it?), there is behavior, attack (but whom?), the function of the attack is to destruct, and the ego defense is displacement (attacking something weaker than the perpetrator) in this case, a few unarmed lawmakers. Emotions were no doubt manipulated and contributed to the mayhem, but they also aren’t the primary suspect.