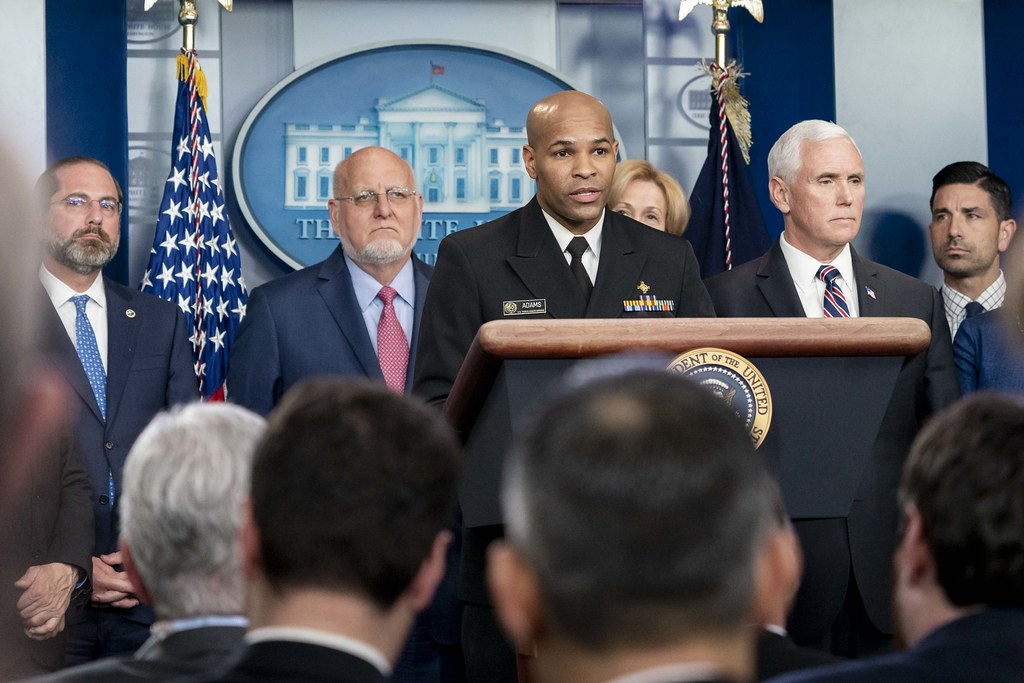 “President Trump, Vice President Pence, and Members of the Coronavirus Task Force Brief the Press” is part of the public domain (via Flickr)

Remarks made by U.S. Surgeon General Jerome Adams at last week’s coronavirus press briefing have sparked a heated debate. Most of the commentary surrounding those remarks has focused on accusations of patronizing language or, alternatively, the ever-expanding grip of PC culture. But the real controversy lies elsewhere. The true significance of the Surgeon General’s words rests in parsing ambiguous language; we need to know what is meant by the observation that people of color are “socially predisposed” to COVID-19 exposure, infection, and death.

What could explain these figures? Adams highlighted several of the underlying factors placing Black Americans at greater risk: they are more likely to have complicating conditions such as diabetes, high blood pressure, and heart disease, as well as being more likely to lack access to health care. All of these factors mean that Black Americans are “less resilient to the ravages of COVID-19.”

What is more, people of color, generally, are also more likely to be exposed to infection in the first place. They are more likely to live in multi-generational homes, reside in high-density housing, and make up “a disproportionate share of the front-line workers still going to their jobs.” As Jamelle Bouie explains,

“Race […] still answers the question of ‘who.’ Who will live in crowded, segregated neighborhoods? Who will be exposed to lead-poisoned pipes and toxic waste? Who will live with polluted air and suffer disproportionately from maladies like asthma and heart disease? And when disease comes, who will be the first to succumb in large numbers?”

Skeptics continue to contend that it is reductionist to blame racism for these inequities, and offer in its stead the familiar trope of private behavior and individual choice. But casting the problem as one of personal responsibility not only overlooks the history of systemic racism and structural socioeconomic oppression — that define things like one’s housing and job opportunities which in turn determine one’s relation to this disease — it perpetuates the false narrative that the sufferer is responsible for her suffering.

One the one hand, “social predisposition” can be read as vaguely acknowledging the history of institutional racism and the consequences it has wrought (and continues to work). Structural forces have conspired (consciously and unconsciously) to disadvantage minorities and enshrine differential access to goods and opportunities on the basis of skin color. On the other hand, “social predisposition” can just as easily be understood as gesturing at social habits, predilections, and weaknesses.

Does such fine analysis of the Surgeon General’s comments make a mountain of a molehill? John McWhorter of The Atlantic, for example, describes this type of criticism of Adams’ remarks as overblown. It is inappropriate and impractical, McWhorter argues, to insist that every talking head reference the prescribed origin story whenever a racial disparity arises. “Members of a certain highly educated cohort,” McWhorter writes, “consider it sacrosanct that those speaking for or to black people always and eternally stress structural flaws in America’s sociopolitical fabric past and present as the cause of black ills.” What’s worse, “writers and thinkers give an impression that their take is simple truth, when it has actually devolved into a reflexive, menacing brand of language policing.”

But the Surgeon General’s remarks cannot themselves be regarded as neutral. The message behind “social predisposition” is ambiguous without context. But when it gets coupled with a plea aimed directly at people of color to change their habits concerning drugs and alcohol because “we need you to step up,” it starts to sound a lot less ambiguous. It threatens to transform the claim about “social predisposition” from a statement about constraining factors to a question of volition. It moves from the language of preexisting conditions to elective tendencies. It reduces structural injustice to a matter of choice.

It also changes our conversation about the link between race and health outcomes from one of correlation to one of causation. Thus, it seems only fair that other potential “causes” should get a hearing. It may not be within the Surgeon General’s purview as a public servant for national health to comment on the root cause of social injustices, but then it can’t be within his purview to subvert that project either. Even if his intention was merely to offer “wise counsel in hard times,” it matters how that advice gets heard and who all hears it.