To Keep or Not to Keep? The US Electoral College and Presidential Representativeness 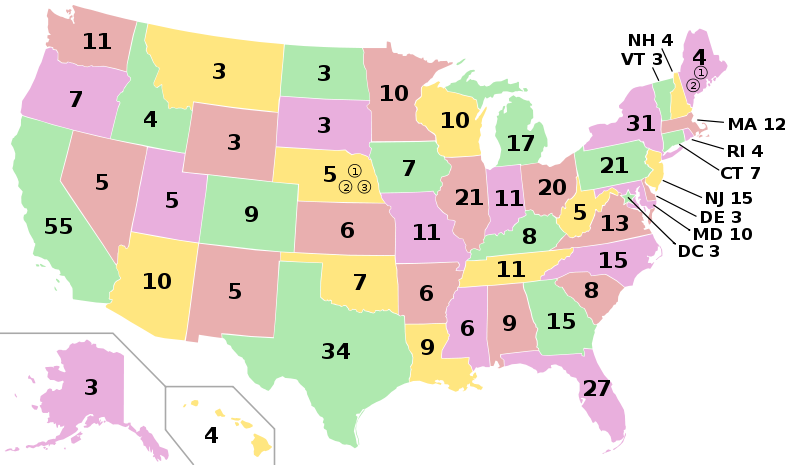 “One person, one vote” and “Not my President!” These mantras underlie calls for election reform in the United States. They are pressed urgently now regarding the Electoral College and its role in selecting the President of the United States (POTUS) as the 2020 election approaches. Solutions posed by critics range from reformation, to circumvention, to abolition. To many the Electoral College is patently undemocratic because it does incorrectly represent the choice of the national constituency. This view is officially championed by numerous candidates for the 2020 Democratic Primary: Cory Booker, Elizabeth Warren, Jay Inslee, Julian Castro, Kirsten Gillibrand, Marianne Williamson, Pete Buttigieg, and Robert “Beto” O’Rourke.

During 2019 several states passed and signed legislation to join the National Popular Vote Interstate Compact: Colorado, Delaware, New Mexico, and Oregon. (Additionally, the measure passed both chambers of Nevada’s state house but was vetoed by Gov. Steve Sisolak.) These states join 11 others, and the District of Columbia, in pledging to assign their electoral votes to whichever candidate wins the national popular vote. This would effectively circumvent the Electoral College while leaving it in place. However, the compact only takes effect once enough states have signed up: i.e., enough states to contribute the 270 out of 538 electoral votes needed to win election.

How does the Electoral College work? Each state in the US is allotted a certain number of electoral votes, based on their representation in Congress (House seats plus Senate seats). Electoral votes are cast by individuals nominated to the College of Electors, whose votes directly determine which candidate becomes president. Most states give all their electoral votes to whichever candidate secures a simple majority (51%) of their popular vote. Maine and Nebraska are the exceptions, assigning electoral votes on the basis of results in each of their US House districts: a candidate receives one vote for each district they win, and the candidate who wins the statewide popular vote receives 2 votes.

Disagreements about the Electoral College are about who the POTUS represents. That is, it’s about what representation is and who the represented constituency is. Hanna Pitkin’s 1967 The Concept of Representation provides an important touchstone for a thoughtful discussion of representation. She elaborates four facets of representation: Formalistic, Symbolic, Descriptive, and Substantive. (See the Stanford Encyclopedia of Philosophy article on Political Representation.)

Superficially, the disagreement between detractors and supporters of the Electoral College solely concerns Pitkin’s formalistic aspect; the debate hinges on questions pertaining to the political process and its ability to confer legitimacy. We ask whether the election was conducted according to existing rules and the spirit of the law. Setting aside concerns about election tampering/interference, some claim President Trump’s 2016 election was “illegitimate” because he received significantly less of the national popular vote than Hillary Clinton. However the formalistic aspect of representation doesn’t fully capture the sense of illegitimacy pressed here: President Trump was elected according to the established protocol of the Electoral College system.

An alternative explanation is available in Pitkin’s symbolic and descriptive aspects of representation. When people denounce President Trump as “not their president”, they often mean to say that they object to what he stands for, or claim that he fails to resemble the voting public physically or ideologically. Such people would presumably accept, and feel represented by, a candidate who won the popular vote. Hence when critics of the Electoral College argue that the outcomes of US presidential elections are undemocratic, and don’t represent the will of US citizens, they mean it in the symbolic and descriptive senses. (This article will not discuss Pitkin’s substantive aspect. It involves an officeholder’s performance of their duties, which can only be evaluated after elections.)

While advocates for a national popular vote see US citizens at-large as the represented constituency, advocates for the Electoral College see US states as the represented constituency. This isn’t an irrelevant distinction. Consider a hypothetical situation in which the NPV is in effect. If the citizens of Oregon, which is in the NPV, vote unanimously in favor of one candidate but that candidate loses the national popular vote then all of that state’s electoral votes go to a candidate for whom not a single person in Oregon voted. The NPV, and any national popular vote scheme, recognizes no difference between Oregon voters and the voters of any other state—everyone is just a US voter. However the Electoral College system does distinguish between voters on the basis of their state of residence.

Opponents of the Electoral College understand this, and argue that these distinctions diminish the voting power of some citizens relative to others. This effect is not a necessary consequence of the Electoral College—or at least not the effect’s magnitude. Rather it’s a direct effect of the cap on the number of voting representatives in the US House at 435 (Apportionment Act of 1911). This also caps the number of electors and has led to the average number of citizens represented by a House member (and hence the number of individual votes subsumed by an electoral vote) to increase over time, though differently for different states. The inflation/deflation of voting power Electoral College critics highlight is a direct consequence of the fixed number of House representatives.

Increasing the number of Representatives would ameliorate the symbolic and descriptive representativeness problems of the Electoral College, while also increasing the representativeness of the House. Further it can be done by legislation in Congress rather than a Constitutional amendment as would be required to abolish or reform the Electoral College. Finally it preserves the distinction between voters of different states, respecting the federal structure of the US government. This consideration will not appeal to many opponents of the Electoral College. However, short of full abolition, increasing the total number of electoral votes by increasing the size of the House addresses representativeness problems, and does so without leaving open possibilities of bizarre, and objectionable, situations such as the hypothetical Oregon case above. The current Electoral College is malfunctioning, and the best ways to deal with it are complete abolition or substantive reform. The NPV does neither, merely walking around a broken machine without fixing it or removing it—leaving it to belch an occasional cloud of toxic smoke.